Despite the change in ownership and chefs, Chakra remains one of Jerusalem’s finest restaurants 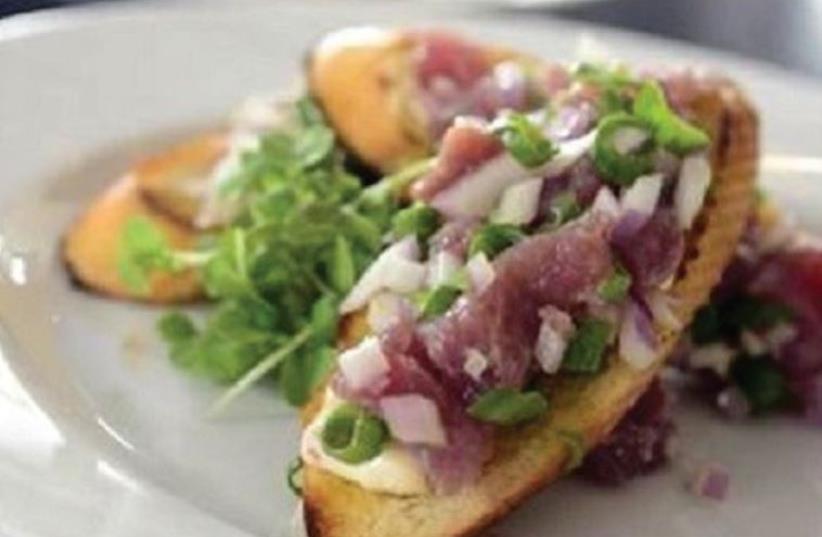 Chakra restaurant in Jerusalem
(photo credit: PR)
Advertisement
The upper level of the distinctive round building on the King George Street side of Independence Park has seen many restaurants come and go over the years; but the lower level, whose entrance faces the park, has long been the uninterrupted home of just one restaurant, Chakra.And with good reason. Under its founder and head chef Ilan Garussi, Chakra earned a well-deserved reputation for excellent food. Just over a year ago, Garussi left to start a new restaurant on Keren Hayesod Street, leaving Chakra in the hands of his former colleagues, chefs Eran Peretz and Eitan Gastwirt. The restaurant appears to have endured, but I was anxious to discover for myself whether it has maintained its same high standards.The first good sign was that Chakra still offers a tasting menu, promising the best of what the kitchen can serve that evening. The second was the attentive service, rendered in flawless English. The third was the familiar surroundings: the plentiful al fresco seating, the comfortable booths and the handsome, well-stocked horseshoe bar.The expertise of those staffing the bar becomes evident upon perusing the seasonal cocktail menu featuring five tempting specialty cocktails. The choice was not easy. I finally settled on the Jalisco Lychee (NIS 45), an intriguing mix of tequila, lychee liqueur, sage, pineapple, lemon and lemongrass. The taste was as complex and indescribable as it sounds. Suffice it to say that I would gladly have downed another one.Choosing what food to order, on the other hand, was not difficult.The tasting menu can virtually be as endless as you choose it to be, for NIS 265 per person, which includes a bottle of mineral water.First to arrive was antipasti – grilled fresh vegetables – accompanied by picture perfect focaccia straight from the stone oven: warm and chewy, with a golden brown crust. The antipasto course expanded to encompass two more dishes: roasted beets in a balsamic reduction with fresh buffalo mozzarella cheese, and a medley of summer vegetables on labaneh. The beets and wild mushroom were quite meaty, complemented nicely by the dairy pairings.The salad course was endive and baby greens with drunken pears, praline pecans and blue cheese in a barely perceptible vinaigrette. The slight bitterness of the endive was offset by the sweet fruit and candied nuts, resulting in an exquisite combination.While even a vegetarian could do very well at Chakra, the fish, seafood and meat courses beckon.First among the ones we tried was the tuna sashimi, with leafy green herbs and chili. While I could scarcely detect the heat of any chili, that was just fine, as the freshness of the tuna practically jumped off the plate.The seafood course chosen for us by the kitchen had a mysterious name: Calamari Meurav. It turned out to be one of the most original dishes I can recall having. The body and heads of the tiny squid were sprinkled with the seasoning used in the classic meurav Yerushalmi, served in a creamy tehina sauce.There were also dabs of spicy harissa and lemon pickle, which could be overpowering unless one balances carefully. Full marks to the chefs for the inventiveness behind this delicious dish.Our meat course consisted of filet mignon in a red wine sauce with shallots on a bed of root vegetable puree, plus a “bonus” in the form of a single lamb chop.The beef filet was cooked rare – a bit too much so for my taste, although my companion found it exactly to her liking – and we both enjoyed the juicy, flavorful steak.The lamb chop had just the right amount of fat trim, with a pinkish red interior. I could not have asked for better.With not much room left for dessert, we let the waiter serve us tiny samples of four desserts – just enough to ascertain that the kitchen’s expertise extends to the final course as well. In particular, the Valrhona mousse was a confection that would please the most dedicated chocaholic, while I finally found a crust in Israel worthy of the cheesecake’s rich filling. The one surprise was learning that the restaurant serves espresso but not cappuccino.In addition to the feeling of delightful satiety, I left with the happy impression that in spite the departure of Chakra’s talented founder, the restaurant remains one of the bright stars in Jerusalem’s gastronomic firmament.The writer was a guest of the restaurant.Chakra Not kosher 41 King George St., Jerusalem Tel: (02) 625-2733