The Haifa-based musician says Barbara got inside her soul "like a sort of dybbuk." 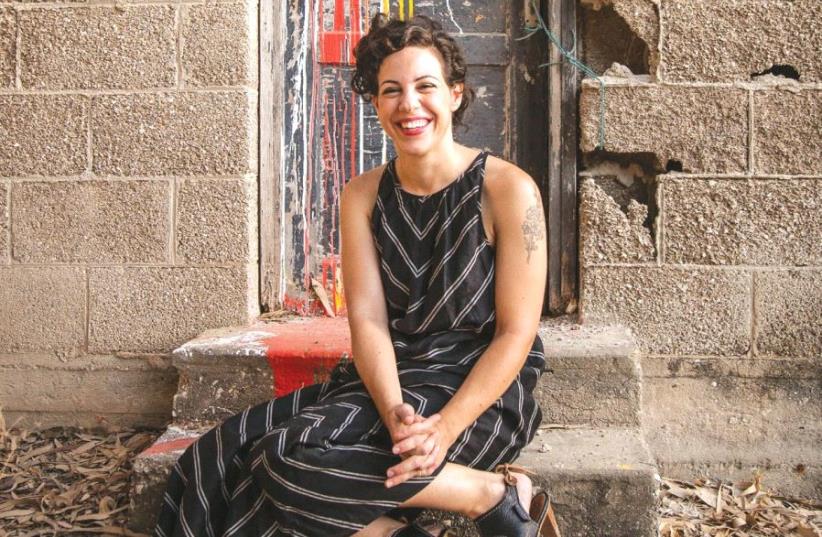 Israeli vocalist Talya Eliav
(photo credit: YAARA OREN)
Advertisement
Local Francophiles are in for a treat on Monday (9:30 p.m.) when Talya Eliav takes the stage at the cozily proportioned HaMazkeka venue in Jerusalem. Israelis of French origin may also get a kick out of the show, even though the repertoire will be presented in Hebrew.The 31-year-old Haifa resident vocalist has been on the local poprock scene for a while, performing at venues up and down the country and putting out five albums in the process. Her latest offering, Talya Eliav Chante Barbara, produced by Eliav’s guitar-playing life partner Shai Lewinstein, is a derby doff to the titular legendary chanteuse, who died 20 years ago.Barbara was born Monique Andrée Serf in Paris to a Jewish family, in June 1930, and survived World War Two in hiding. The trauma of spending much of her childhood years forcibly cloistered left their imprint on the iconic French singer, and that comes across, palpably, in the numbers Eliav renders, in Hebrew, particularly “Mon enfance” (My Childhood). When the Israeli sings Barbara’s lines: “I wanted to see the hillside where the evening slipped, blue and gray shadows of silence,” you can feel the anguish that festered inside the chansonnière over the years.While there are translation experts who are adept at conveying the original textual content in a different language, it is trickier to project the source emotional baggage. Eliav manages this with aplomb. She says she was drawn to the language by the music.“My interest in French was really sparked by Barbara. I love other French singers like Serge Gainsbourg and [Georges] Brassens, but Barbara really got inside me, like a sort of dybbuk.”Artists sometimes perform for audiences who don’t speak the source language, but the paying customers still manage to get the textual and spiritual message. That worked for Eliav, as a listener.“I was drawn powerfully to Barbara’s songs, without any previous knowledge of her work and, at the time, without understanding the words. I think her phrasing, and the way she pronounces the words through her musical language, really grabbed me. I’ve met other people who were mesmerized by Barbara, without understanding French. If it grabs you, it grabs you powerfully.”Eliav was well and truly hooked, and quickly got a couple of Frenchborn friends, Hubert Helal and Noémie Dahan, in on the act. They helped translate the text and spirit of Barbara’s lyrics into Hebrew. Eliav then took an incremental step toward getting an even better handle on the wording by getting some French lessons in, from Dahan. When she drops the odd word of French into the Hebrew lyrics it sounds very convincing, and somehow you get a sense of the music of the language, and the personal baggage Barbara brought to her work.“Hubert saw Barbara perform, when she was starting out, and he helped translate the cultural aspects of the lyrics too. The translation is to be able to understand what she is saying, and how she is saying it, and also what kind of expressions she uses to get that across. Understanding that really help me progress with Barbara’s material and, in the end, I wrote the Hebrew lyrics myself.”That, naturally, gives Eliav more of a vested interest in the Israeli version, and makes the end product more convincing. Listening to Talya Eliav Chante Barbara you get the feeling that, while inspired by the French diva, it is coming to you through Eliav’s own personal baggage – that’s in addition to the vocal subtleties and silky technical nuances in the Israeli’s reading.Eliav’s evolving artistic consciousness received a push in the desired direction when she attended the anthroposophic school at Kibbutz Harduf. The singer says she benefited greatly from the generous allotment of school time devoted to music and the arts in general.“The school gave a lot of a respect to art in general. Today we live in a world in which the artistic dimension of life is totally ignored as a fundamental element in the experience of living. There are lots of things, in the arts sector, that are shallow. We – the artists – have to keep on putting our work out there. For me that’s true Zionism. We mustn’t give in.”Eliav started honing her craft at a very young age. That was partly sparked by some paternal encouragement, as well inspiration gleaned from one of the most lauded singer- songwriters of the past half century. “I started writing songs at the age of 13. I had notebooks crammed with them. I started performing at the age of 16. I had a group and I was really into Joni Mitchell, she was my great hero. She’s like my mother,” Eliav laughs. One of the Canadian artist’s early records, Ladies of the Canyon, helped the youngster to find a name for the group. “We called ourselves the Ladies of the Cliff,” she chuckles. “We were only little. And my dad always loved [Mitchell contemporary singer-songwriter] James Taylor, and he’d play his songs for me. He was into all that genre.”Although Eliav largely found her own way through the mysteries of pop music making, she did have a good formal grounding, taking piano lessons from the age of nine.“I played Beethoven sonatas and such like. Classical music greatly influenced me,” she says. She upped her training ante by quite a few notches four years ago, when she took a BA in music studies at the University of Haifa, and is now doing a master’s degree there.It was Lewinstein who opened the door to Barbara’s supremely emotive work.“To begin with I’d use Google Translate to try to get some understanding of the lyrics,” says Eliav. “I was so moved by her music and her words. This is a labor of love for me, the album and the show. This is not a cover version. This is me paying my respects to Barbara.”