Barak Tal founded the Tel Aviv Soloist Ensemble 20 years ago when he was 25.

One of the trademark sketches by the Monty Python bunch features a quartet of erstwhile down-at-heels Yorkshireman who eventually made good. They reminisce about “the bad old days,” and the phrase “who would have believed, 30 years ago” is a frequent reprise.

Barak Tal could be forgiven for repeating the phrase, as he and the members of the Tel Aviv Soloists Ensemble prepare to unveil their 2021-22 season of concerts, the orchestra’s 20th. The new program kicks off on October 17 (8:30 p.m.) at the Israel Conservatory of Music in Tel Aviv, with a repeat rollout of the repertoire at the Municipal Conservatory in Acre two days later (7 p.m.).

When Tal founded the orchestra he was all of 25 years old, presumably with dreams aplenty. Although now, at the “grand old age” of 46, he says he never considered where he and the ensemble may be at two decades on. “We noticed that, at our first concert, our average age was 25,” the conductor-music director chuckles. “We were almost all under the age of 30. We are now at the stage whereby we have two or three musicians who were not even born when the ensemble started out. That is very moving for me.”

Naturally, Tal and his contemporaries have advanced down the long and winding road of life, while youngsters have joined their ranks. This, says the ensemble founder, only serves to infuse him and the relative “grizzlies” with renewed fire in their musical bellies. “We have veteran instrumentalists who are very experienced, some around my age and some even a little older. I think we have a wonderful combination of seasoned players alongside enthused, energized young musicians.”

Tal says the goal of all the ensemble members, regardless of the length of service, is one and the same. “The common denominator between us all is the very high standard of musicianship. We like to generate a fun, enjoyable ambiance, but we never compromise on the quality of our performances.”

Over the years, the ensemble has also made a habit of unveiling works by Israeli composers. This season’s curtain-raiser includes a premiere, and a stirring one it promises to be too. The debutant this time round is Concerto for Cello, Strings and Percussion by 78-year-old Yoav Talmi, a world-renowned conductor in his own right. “Over the 20 years, almost every concert has included something by an Israeli composer,” Tal notes. “There have been a lot of premiere renditions. I don’t know exactly how many but I think we have performed over 50 brand new works.” 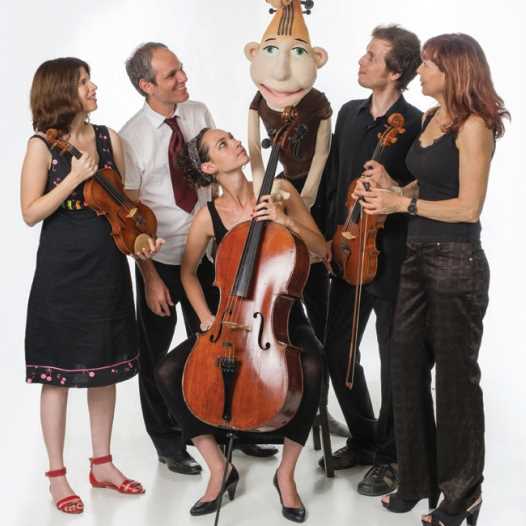 The Talmi piece, like the ensemble itself, was both the victim and the beneficiary of the coronavirus lockdown. “We should have celebrated our 20th-anniversary last year. But we couldn’t because of COVID,” Tal explains. “The Talmi composition came about completely by chance. The pandemic messed everything up for us. Last year we were supposed to do a concert, with [cellist Hillel] Zori, that was exclusively based on Tchaikovsky compositions, actually without an Israeli piece.”

Talmi and Tal are professional colleagues at the Tel Aviv Academy of Music. “One day Yoav told me that, during the lockdowns, he began writing a new cello concerto, for Hillel Zori. I told Yoav that sounded great but I wasn’t sure if I could change the concert program to fit it in,” Tal continues.

The lockdowns shook up the ground rules and, eventually, played into Talmi’s hands. “The concert had to be canceled, because of the coronavirus. The concert ended up being postponed by a year, and Hillel was very enthusiastic about the idea of playing Yoav’s new work, alongside Tchaikovsky’s Rococo [Variations for Cello and Orchestra].”

Therein, also, lies a fetching bridge between past and present. “The second movement, which is amazing, is based on the famous sonata for harpsichord in G minor by Scarlatti. Towards the end of that movement, the soloist cellist together with the three cellists of the orchestra – it is really a cello quartet – quote from Scarlatti’s original work,” Tal explains.

Meanwhile, the orchestra sets up a sort of stylistic counterpoint to the principal melodic theme. “The orchestra plays different things in the background, with contemporary harmonies. It is very beautiful.”

The program of the varied season opener starts out with Adagio for Strings by 20th-century American composer Samuel Barber, closing with Mozart’s Symphony no. 29 in A major, which also featured as the finale of the ensemble’s very first showing 21 years ago, and which Tal describes in terms of “closure.”

Later on in the season, classical music fans can look forward to catching celebrated American violinist Rachel Barton Pine finally getting here as the soloist in a Paganini violin concerto – her original date was deferred due to the global health-related situation – and German countertenor Andreas Scholl makes a return visit in a rendition of Pergolesi’s ever-popular Stabat Mater. Israeli pianist Alon Goldstein will perform a brace of Mozart concertos on the same evening, while internationally acclaimed trumpeter Sergei Nakariakov will also perform.

Tal says he is looking forward to presenting the highly varied repertoire over the next few months “We will perform no fewer than five Israeli works,” he proudly notes. One is Mizmorei Yerushalayim (Jerusalem Psalms) by guitarist-composer Daniel Akiva, for marimba, guitar and orchestra while, further on down the programmatic road, singer-songwriter and classical pianist Shlomi Shaban stars in a 20th-anniversary gala concert.