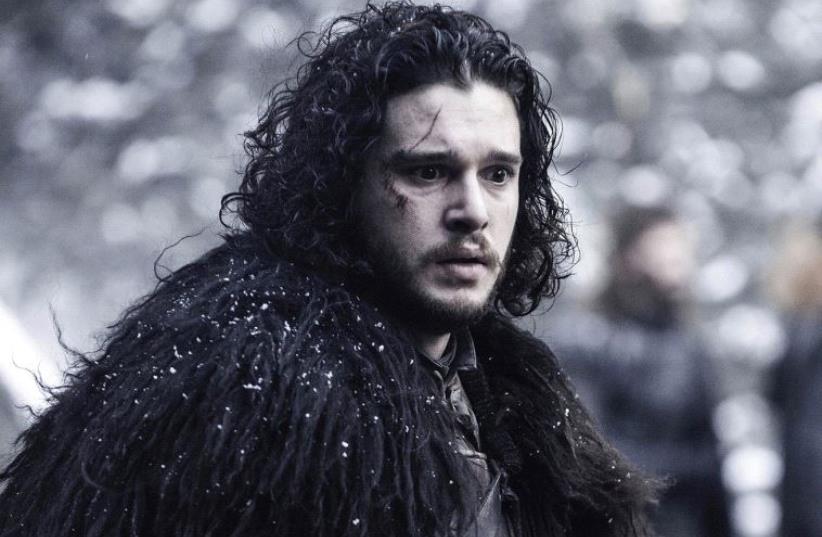 'Game of Thrones'
(photo credit: PR)
Advertisement
Those interested in the Israeli movie industry, which is having a very strong year, one of the best in a decade, will be interested in watching the Ophir Awards, the prizes of the Israel Academy for Film, which will be announced in a ceremony in Ashdod on September 22. It will be broadcast live, although the time and channel have not yet been announced.One sad note among all the fun will be the absence of Ronit Elkabetz, the extraordinarily gifted actress/director who died last spring. A performer who embraced theatricality, Elkabetz wore high-fashion, flamboyant get-ups every year, almost like Lady Gaga or Cher in the US. Her talent and her taste will be missed.And, of course, there is a little ceremony called the Emmys, which will be broadcast here on YES Drama on September 19 at 3 a.m. This has certainly been a good year for the television industry, and Emmy watchers are predicting big wins again for HBO’s Game of Thrones, the gory fantasy show that had viewers glued to their screens. Some are saying the spy drama The Americans has a chance of winning Best Drama, and even possibly Mr. Robot. Many predict that Rami Malek, the young star of Mr. Robot, will win for Best Actor in a Drama, but he has tough competition in Kevin Spacey, the malevolent president from House of Cards.Robin Wright, who plays the Lady Macbeth-type first lady on House of Cards, is the favorite to win the Best Actress in a Drama Award, although I would be happy if Keri Russell won for her portrayal of an extremely complex and stressed-out spy on The Americans. In spite of Russell’s popularity on the show Felicity in the 1990s, she has never been nominated for an Emmy before.Can Veep win again for Best Comedy Series? Of course — how can it not in this crazy US election year? The crew working with President Selina Meyer look positively restrained compared to Donald Trump and his political operatives. And the subject of a woman president, in the first year that either US party has had a female nominee, couldn’t be more topical. Julia Louis-Dreyfus is expected to win again, too.We’ll have to wait for 2017 to find out what happens to Meyer and her staff in Season 6. In the meanwhile, we can watch the strange reality show that is US politics this year. (The first presidential debate will take place on September 27 at 4 a.m. Israel time and will be broadcast live on CNN and Fox.) The People v. O.J. Simpson: American Crime Story got the lion’s share of the Limited Series nods — 16 in all — and seems poised to win. It was certainly a watchable series, although I didn’t feel it added much to what we already knew about the O.J. affair. The other series that is considered a contender is Fargo, which was produced by the Coen brothers and plays much like one of their movies.Speaking of Emmy winners, last year’s Best Actress in a Drama winner, Viola Davis, will be returning for Season Three of her series, How to Get Away with Murder, which will run on HOT VOD and HOT 3 on Mondays at 8:45 p.m. starting on September 26.Davis plays the charismatic, ethically challenged criminal-law professor Annalise Keating, who teaches her students exactly what the title suggests.It has a great cast and was executive-produced by Grey’s Anatomy creator Shonda Rhimes, but Davis is very much the star of the show. And she is great fun to watch.Adam Sandler is turning 50, and YES VOD is celebrating throughout the month by offering a selection of his hits.People usually love or hate the former Saturday Night Live comedian, but there is no disputing that he has made some funny movies, among them 50 First Dates and Anger Management. Many people have emailed me to say that You Don’t Mess with the Zohan, the movie in which he plays a Mossad agent, is actually hilarious – but we’ll just have to agree to disagree on that.