Tel Aviv Pride Parade is not just a celebration. 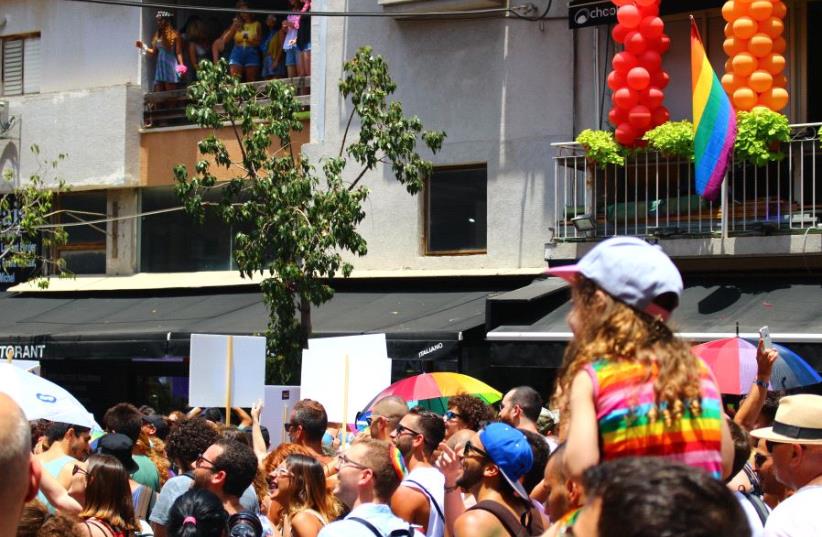 Tel Aviv Pride participants enjoying the celebrations, June 9 2017.
(photo credit: Courtesy)
Advertisement
More than 200,000 people packed Tel Aviv’s streets Friday for the annual LGBT Pride Parade, making it the largest-ever pride parade in the Middle East and Asia, according to the Tel Aviv-Jaffa Municipality.It began at Meir Park in central Tel Aviv, where thousands of activists, revelers and everyone in between donned rainbow-colored outfits and waved LGBT flags. Marchers banged drums, blew bubbles and danced in the street, creating a slow-moving street party that concluded at the beachfront Charles Clore Park.“Tel Aviv Pride Parade is not just a celebration, but also an important declaration of support. Tel Aviv, which has already been acknowledged as the world’s ‘most gay-friendly city,’ will continue to be a light-house city, spreading the values of freedom, tolerance and democracy to the world,” said Mayor Ron Huldai.On Bograshov Street, marchers hoisted signs reading “Love is love” and activists from Israeli Gay Youth held a large red banner reading “We are everywhere.”Meanwhile, hundreds of police officers kept a watchful eye over the event, some sitting in elevated viewing posts armed with rifles.“The parade is a perfect combination of protest and joy,” Zionist Union MK Merav Michaeli told The Jerusalem Post. “It’s a demonstration of freedom.”She derided the Likud-led government for not passing significant LGBT-rights legislation.“There is a weird tension between the rights that we do have, which were achieved through petitions to the High Court, so there are rights, but in legislation we can’t get anything passed.”Ohad Attya, a gay, Likud activist, said the government, although hampered by ultra-Orthodox parties in passing LGBT-rights legislation, has increased funding to LGBT organizations.“The idea that if you are gay you have to be a leftist is false,” he said, speaking under a banner that read, “From the River to the Sea, Israel will always be.”Along with revelers, there were some 50 Israeli, Palestinian and international marchers with the Pinkwashing Israel group, carrying signs in Hebrew stating: “End the washing,” a play on the Hebrew phrase “End the occupation.”“We are not protesting the gay pride parade, we are participating in the parade as protesters,” said Noa Bassel, an organizer with Pinkwashing Israel.“What we are protesting against is the PR that Israel carries out using the gay community and we claim abuse and that [Israel is] not giving us our rights and is portraying itself as liberal and democratic when it essentially is not.”Meanwhile, Bayit Yehudi MK Moti Yogev tweeted on Friday that “a Jewish family is a father and mother who naturally bring life into the world,” sparking outrage from LGBT rights activists and accusations of homophobia from Zionist Union MK Omer Bar Lev.According to a poll published Thursday by Hiddush, a religious pluralism organization, 79% of a representative sample of 500 Jewish Israelis supported the establishment of same-sex marriage or civil unions for gay couples.