The bells are ringing 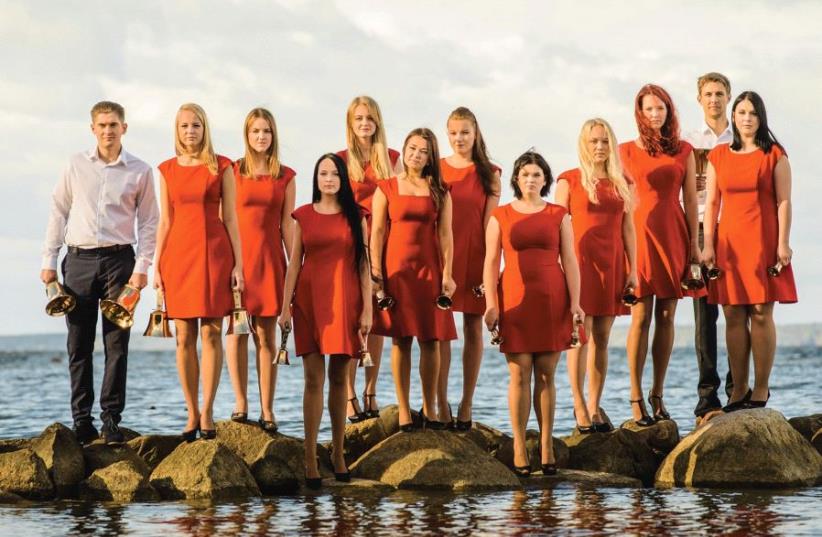 The Estonian handbell ensemble Arsis
(photo credit: BELL ARSIS)
Advertisement
If you think you’ve already heard it all, you may be wrong.Because you probably have never heard a handbell ensemble. At least not in Israel.Well, now you’ll have that chance to hear one. Arsis, a 20+ year old handbell ensemble, is coming from Estonia as part of MustonenFest, the Estonian-Israeli music festival.“I heard handbells for the first time in 1991 in the United States and I got hooked,” says Arvid Mae, artistic director of the Arsis ensemble, in a phone interview from Tallinn, Estonia.“At the time, I was working on my master’s degree in choir conducting. After hearing violins, celli and trumpets, the handbell sound was so new, so different. It is all about their sound. It is so pure, with special overtones. In a way, it reminds me of the organ. I immediately knew we needed such an ensemble in Estonia.”On his return from the US, Mae founded Arsis. It is not a handbell ensemble but a chamber choir.“We performed at home and toured the world. Within a few years we had sung most of the golden choir repertoire, so I felt it was time for a change,” he says.The conductor explains that handbells as a musical instrument were first introduced in England.“In the early 19th century, having a handbell set was a must for every village; it was a question of identity. In Estonia, we played handbells for the first time in 1993.”Mae says there are now two music schools in Estonia – one in the old university town of Tartu, and the other in Tallinn – where approximately 300 children study playing handbells.“These are regular music schools, with handbells being the major instrument,” he explains. “Since it is an ensemble, the students already start playing from the first lesson, which is fun.”Since Mae was the first Estonian who knew what handbells were about, where did his ensemble come from? Who taught the musicians? “When I was in the US, I played handbells for about a year, so I was the first one to teach my friends. We also invited teachers from abroad and had numerous symposiums and conferences. As for the performers, I took them from my choir. They were already musically educated, and there was such an interest in the new instrument that I made kind of a competition – only the best were admitted to join the new ensemble,” he laughs.Speaking about their repertoire, Mae says, “We play whatever we want. There’s a lot of traditional music, as well as arrangements. And many Estonian composers write music for us, such as Arvo Part.”In closing Mae, says that handbells are just his hobby.“I am the head of the Estonian National Opera. I studied clarinet at a special music school in Tallinn and continued on to the Music Academy, where I switched to choir conducting. I did my master’s degree in the US, and in between I lived in Russia for four years as a member of a rock ensemble. Touring Russia, I gave more than 1,500 concerts as a singer!”

Arsis will give a free outdoor concert on February 25 at 10 a.m. in the Sarona Compound in Tel Aviv as part of festivities for Estonian Independence Day. That night at 8:30, the Bells and Orchestra concert will take place at the Tel Aviv Museum of Art, with the Israel Camerata Jerusalem conducted by Andres Mustonen. (For tickets, call 1-700-552-000). On February 26 at 8 p.m. there will be a recital at the Museum of Italian Jewish Art in Jerusalem. (For tickets, call (02) 624- 1610.)