The blues are alive – in Germany too

German guitarist-vocalist Todor Todorovic together with his Blues Company will churn out the vibes at Mike’s Place bars throughout the country. 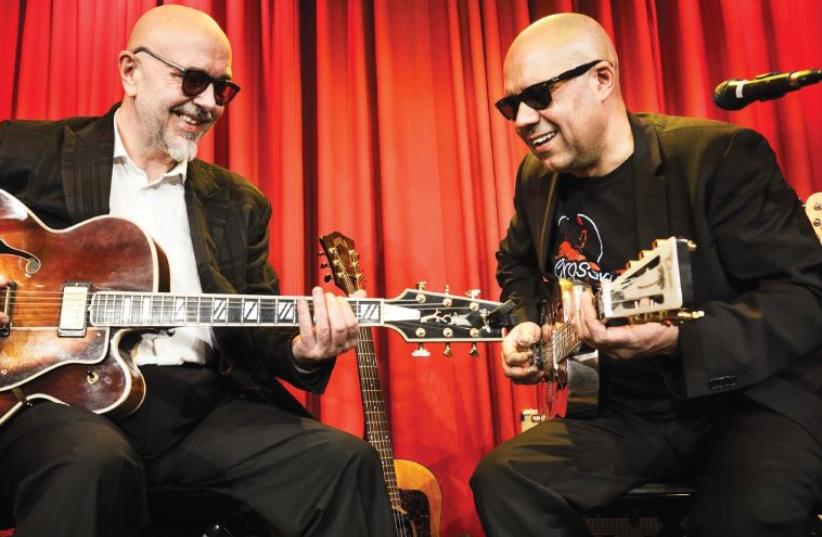 German bluesman Todor Todorovic (left) with Mike Titre, the other half of the Blues Company blues duo
(photo credit: Courtesy)
Advertisement
Back in the late Fifties and early Sixties the blues were pretty much defunct. Few other than diehards who frequented the few struggling joints in the Deep South, Chicago and New York could be bothered with the blues, and that goes for African Americans too. That the blues survived, and later even spawned all the great rock groups of the Sixties – including the Rolling Stones, Led Zeppelin and The Who, to mention but a few – was down to the likes of British blues revivalist Alexis Korner and, later, John Mayall, Peter Green and Eric Clapton.So, considering his Serbian family backdrop and German birthplace, one might assume that Todor “Toscho” Todorovic feeds off a similar cultural reference point.However, the fact is that the 64-year-old German guitarist-vocalist, who comprises one half of the Blues Company blues duo that will churn out the vibes at Mike’s Place outlets up and down the country between October 21-26 – British-born Mike Titre is his counterpart on the Israeli tour – is inspired by the source.Mind you, he did go the regular route at first.“I got into the blues through the English bands, like everyone else,” he says. But, when Todorovic got into the act himself, he came into direct contact with the guys from the art form’s birthplace. “Blues groups and artists came over from America and we accompanied them on their German or European tours,” he explains. “We came in touch with the American style of blues. Pretty soon I began to listen more to the American guys than to the British guys.”Still, it was the British pop and rock scene that led Todorovic into the African American blues garden.“I was born in ‘51 so I started to listen to pop music at the beginning of the Sixties,” he says noting, however, that he tended to gravitate toward bands that fed off the more American-influenced side of the musical tracks. “You know, over here there was always the issue – are you a Beatles fan or a Stones fan.”The same could be said of most members of Todorovic’s generation right across the Western world.“I was always more a Stones fan. I didn’t know why.”The Rolling Stones were always clearly more influenced by R&B, and American musical sensibilities, than the Fab Four, and the German soon find his way to the horse’s mouth.“After a while I heard a B.B. King record. He had the style I loved the most. He had this elegance and a melodic style, and his way of singing and his way of playing just caught me.”Todorovic soon realized that you didn’t have to make a lot of noise, or to expend too much energy, to make a meaningful musical statement.“B.B. King didn’t play too many notes, and he was my first big blues influence.”There were “regal” references in store.“I also liked Freddie King and Albert King – all the Kings,” Todorovic laughs. “They were my big influences.”However, although Todorovic and his pals were deeply immersed in the magical sounds and rhythms that emanated from New Orleans and its environs, the sexagenarian says they were pretty much on their own.“To be honest, when we started playing the blues professionally, in 1976, there was no blues scene in Germany at all. We had punk and so-called New Wave, and blues was not popular at all.”But Todorovic and his pals were totally besotted with the music and were not about to let a trifling factor like not having an audience to play to get in the way of their artistic growth.“It was the music we loved, so we played it. I remember our first gigs,” he recalls.“We’d play at big festivals between some punk bands and rock bands, and we’d come on the stage in suits and ties – we were a blues band.”Their appearance and sound didn’t go down too well, but Todorovic and his mates were obviously made of sterner stuff.“They laughed at us, but we always remembered that the blues is the origin of all popular music. It’s amazing.”Eventually, the band’s persistence paid off.“We carried on performing, and there were more and more young people following us. Anyway, you know, when you are 24 or 25 years old, you have this attitude of ‘this is our music, take it or leave it.’ I couldn’t play something else just to please the audience. That wasn’t our way. It was the music I loved the most and that was what I wanted to do.”In fact, Todorovic did have something to fall back on, in case his blues pursuit was not sufficient to keep the wolves at bay.“I had two choices – to play the blues for a living, or to teach classical guitar,” he explains. “I studied classical guitar and when I finished my studies I had to decide, do I want to be a teacher or do I want to become a blues musician.”Thankfully, he opted or the latter.“I gave myself five years to say whether I could make a living from playing the blues. When I turned 30 I saw that was possible and I stayed with it.”Now, almost 40 years down the blues road, and 30 albums later, Todorovic is coming here with Titre to share some of his heard-earned craft and some of the street-level wisdom he has picked up along the way.He may have paid his dues, and be able to live relatively comfortably from his craft these days, but he says he is still not taking anything for granted.“For the last 40 years I have been able to live off playing the blues! Can you imagine that? For 40 years! I am so grateful for that.”It’s a fair bet that the Mike’s Place audience in Tel Aviv, Jerusalem, Ramat Hachayal and Eilat will be similarly thankful that Todorovic stuck to his guns.Admission to all shows is free. For more info visit www.mikesplacebars.com.