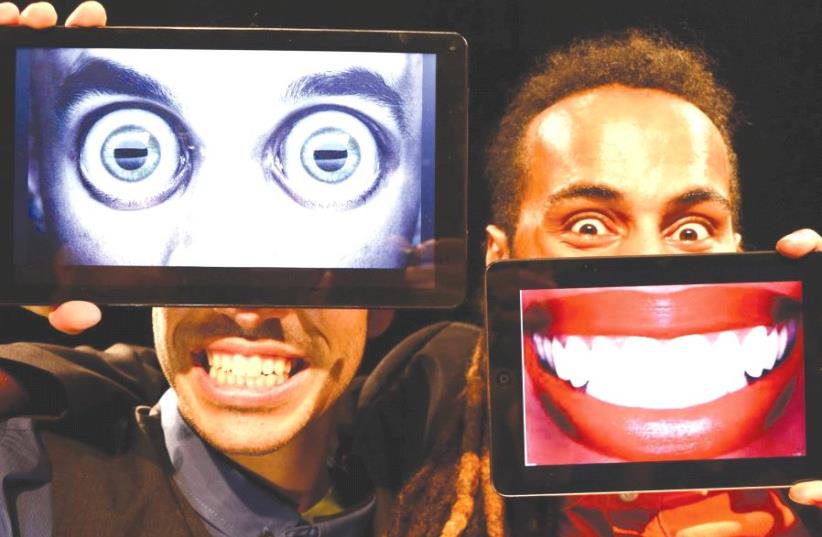 ‘AMFIBI’
(photo credit: IDAN HERZON)
Advertisement
For Ofra Idel, presenting the Machol Shalem Festival in Berlin is bittersweet. On one hand, the event, which will take place this weekend at the Dock 11 performance space, is an unprecedented collaboration for the Israeli dance community.Never before has a foreign presenter requested a “copy paste” of an Israeli festival. On the other hand, producing the event has forced Idel, one of the founders and directors of Jerusalem’s Machol Shalem Dance House, to come to terms with the constant challenges that presenting dance in Israel brings.“It’s sad to say this but it’s actually easier to present our festival in Berlin than it is at our home base in Jerusalem,” says Idel over the phone.The festival in question, Jerusalem Meets Berlin, is a highlights program of pieces presented by MASH over the past several months.“It’s very expensive to do a festival in Israel and abroad there are more funds. Our side had to cover the flights, production and marketing.The Foreign Ministry is helping us and MASH is covering the rest.There are budget cuts everywhere in the world but there is still, without a doubt, more money abroad.”The relationship with Dock 11 began several years ago.“Basically, our collaboration started with Dock 11 when the two managers came to Machol Shalem’s Jerusalem International Dance Week a few years ago. They really liked the artistic line and thought it could fit the audience in Berlin. We stayed in touch since.We’ve been to visit in Berlin, they’ve been here, but we never produced anything together. Then they invited us to come and do a festival together.We sat and chose all the pieces together, pieces performed in MASH in the past two years, some that we commissioned. We chose pieces that we felt could suit Berlin.”Jerusalem International Dance Week, which Idel and Edelman initiated as an alternative and addition to the Suzanne Dellal Center’s International Exposure, brings international promoters, presenters and curators to Jerusalem to take in new works by Israeli choreographers. The event includes premieres, commissioned by MASH, performances of existing works as well as an international choreography competition, the grand prize of which is an invitation to work and perform abroad.For the program, MASH and Dock 11 selected a handful of performances; An Hour with All-Eaters by Shani Granot and Nevo Romano, Black Box by Shamel Pitts, Black Label by Idel and MASH’s children’s show Amfibi.There will also be a screening of Sasha Engel’s film adaptation of Ruby Edelman’s The Holycoaster (s)Hit Circus.“We will host a panel on multidisciplinary art and if it’s the place of art and culture to present the trends in society and how they influence contemporary creation. We will also host a Gaga workshop with Shamel and acrobalance for kids with one of the dancers from Amfibi.”MASH’s trip to Berlin makes the production house’s place as the frontrunner in international dance collaborations official.“This year, we are putting an emphasis on two things: international collaborations and a new series of Machol Shalem Hosts,” says Idel.“We are working with the Seed Dance center in Korea; Sofia Krantz will go to Korea and work in the center with a local choreographer to create a new piece. They will then work in Israel for two weeks. The piece will premiere in Jerusalem International Dance Week 2017. We are working with Derida Dance Center in Bulgaria on a project that will take place in 2018 in which Jerusalem-based starting- out choreographers will meet with Bulgarian choreographers in a type of exchange, a professional development program. We are hooking up with the Talinn University in Estonia, who will host us next year.The program for that collaboration is in the works as we speak,” says Idel.As part of MASH Hosts, choreographers Niv Shenfeld and Oren Laor, Eilit Marom, Anat Danieli, Yossi Berg and Oded Graf will present existing works.“It’s all happening leading up to the summer,” says Idel with a satisfied sigh. Though she is fully aware of the sleepless nights required to turn these plans into reality, Idel is ready for the push and wouldn’t have it any other way.