By ORI J. LENKINSKI
SWAN LAKE
(photo credit: KT)
Advertisement
If Irina Kolesnikova wakes up in a bad mood, is sick or needs time to herself and it’s a show day, she knows that whatever the challenge is, she must overcome it. The celebrated Russian prima ballerina can’t decide to take a personal day or to give a half-hearted performance. It is because of this, not in spite of it, that she loves her job.“There is an understanding of the magic words ‘you have to,’” she explained in a recent interview with The Jerusalem Post. “‘I can’t’ doesn’t help. The public have to come to enjoy and you are obliged to do all you can to make sure their wishes are fulfilled, regardless of your feelings, mood, etc. If you can do this, the audience will return to your performances.”Kolesnikova, 36, was born and raised in St. Petersburg. The daughter of a lawyer and a kindergarten teacher, Kolesnikova was encouraged to pursue extracurricular activities from her earliest school days. She made stops through swimming, ice skating and gymnastics before coming upon ballet.“One day I saw Sleeping Beauty on TV and loved the stunning and unusual costumes and how they danced on tiptoes. It made a huge impression on me and I also wanted to put on a costume and dance on tiptoes,” she said. It was then that Kolesnikova decided to switch tracks and dedicate herself to dance studies. At the age of nine, which many will be surprised to discover is considered a late start for Russian ballet, Kolesnikova entered the famed Vaganova Academy.“I enjoyed everything. The study, the food, the regimen and routine and the desire to improve,” she said.At 18, Kolesnikova auditioned for the St. Petersburg Dance Theatre.“I remember it like it was yesterday. I really liked the work ethos of the collective.” When she asked what roles she would be dancing, the directors assured her that the key was in her persistence and hard work. 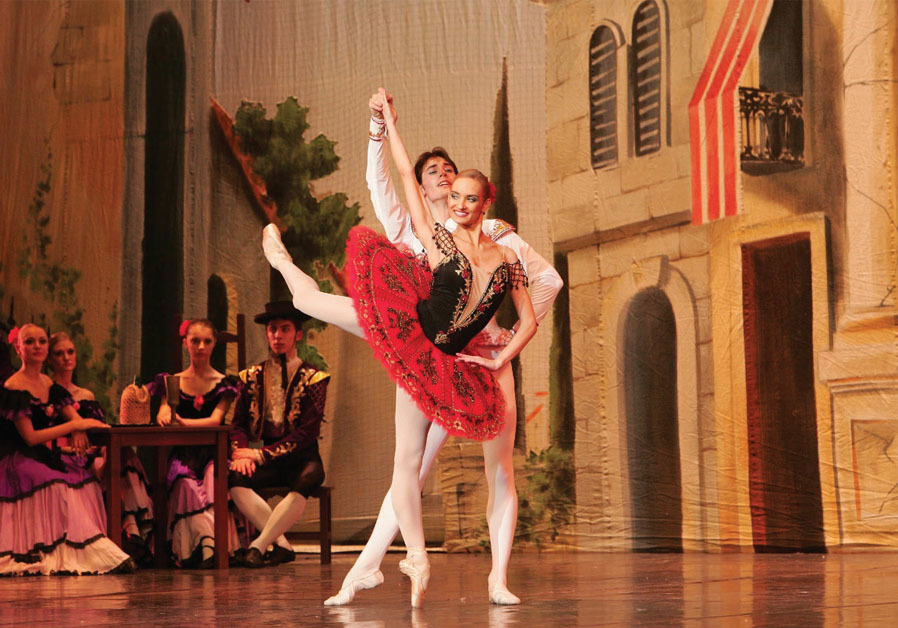 IRINA KOLESNIKOVA as Kitri and Yuri Kovalev as Basil performing Don Quixote. (KT)“I heard that it strictly depended on my work ethic and talent. After this answer, I was convinced that I was making the right choice in joining the company.”Kolesnikova quickly proved herself and within three years, at the age of 21, she became the company’s prima ballerina. Over the years, Kolesnikova has danced dozens of parts in classical and contemporary ballets. She has performed around the world many times over. She is lovingly referred to as “The Crown Jewel” of the St. Petersburg Ballet Theatre.This month, she will lead the 65 dancers of the company on a tour in Israel, which will include two productions and stops in five cities; Herzliya, Beersheba, Ashdod, Haifa and Jerusalem. While in town, the company will perform Don Quixote and Swan Lake.Both of these classical ballets present technical and dramatic challenges to Kolesnikova, who will dance lead roles in each. In her preparation for the performances, Kolesnikova likes to think about the history of the production and find her place in a continuum that dates back, in the case of both ballets, more than 100 years.“The ballets present an opportunity for the dancer to display her emotions,” she said.Four years ago, Kolesnikova gave birth to a daughter. At a point where many ballerinas would have hung up their pointe shoes, Kolesnikova dove back into her work, returning to the stage will great force and commitment.“My first performance after giving birth was unforgettable,” she beamed. The hardships of the work, like long trips away from home and endless training and rehearsal, are manageable for her because they are steps to fulfilling a greater purpose, she explained.“I travel the world, bring joy to people, get acquainted with their culture and of course acquaint others with Russian culture. The language of dance needs no translation.”The St. Petersburg Ballet Theater will perform in Israel November 12 to 21. For more information, visit www.hoh-herzliya.co.il.