The hidden Faust in all of us 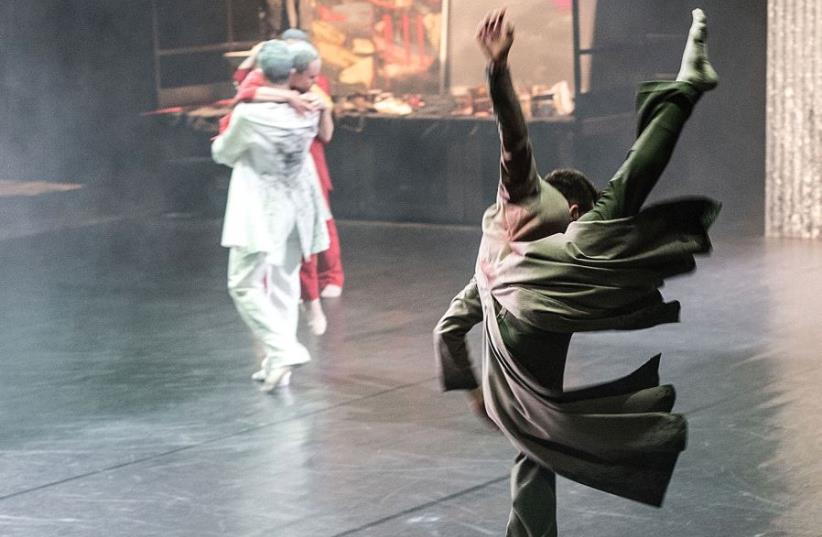 The imPerfect Dancers Company
(photo credit: CARLA FALCONETTI)
Advertisement
Often, when a person is seen as having traded in his/her values for success, he/she is called Faustian. The term is derived from Goethe’s epic tragic play Faust, which tells the story of a scholar and novelist who makes a pact with the devil in exchange for boundless knowledge and pleasure. While Goethe’s tale is gory and extreme, the basic dilemma the author presented is one we encounter often in modern life. What ends justify which means? How far are we willing to go to achieve our dreams? “We believe that in each of us hides a Faust,” says choreographer and performer Ina Broeckx.At the beginning of June, Broeckx and her partner Walter Matteini will bring their Pisa-based company imPerfect Dancers Company to Israel with their production Infaust. This is the company’s second visit to Israel.Their previous tour brought Anne Frank, Words from the Shadows to the Spring Festival 2015, coinciding with the 70th anniversary of Anne Frank’s arrest.“We usually draw inspiration from history and literature,” explains Broeckx. “Our choice of themes is always guided by careful consideration of several factors: their cultural depth, their potential to be developed in an original and modern fashion, their artistic interest, and the emotions they evoke. And our quest to explore and understand the human soul in all its different facets.”Broeckx and Matteini founded the imPerfect Dancers Company in Italy in 2009. Broeckx was born and raised in Belgium and began dancing at an early age. Her career took her throughout Europe, where she danced in works by world-famous choreographers.Matteini’s path was similar, but it started out in Italy. The two came together over a shared vision of a company that combined the fantasy of dance with the realities of life. Their mission statement was to acknowledge, accept and rejoice in the imperfections of each human being, specifically their dancers. “As human beings, we all start from imperfection, striving for the unattainable,” they state on their website.In the studio, the two complement each other.“I train the dancers in the morning. I make them gain complete confidence and full awareness of their body and movement. Walter is focused on the choreographic steps. All along the creative process, we work together in the studio. We are like salt and pepper,” says Broeckx.She and Matteini were drawn to Faust because of the complexity of the story and its enduring cultural relevance. They spent months poring over the text, putting together their vision for the staged production.“I was most intrigued by the thorough analysis of society, an analysis that was modern in Goethe’s time and is still pertinent today. The process then took several months. After reading the tale, we translate our ideas into movements. We always start from the music. And then the sole purpose is to convey emotion,” says Broeckx.Taking hundreds of pages of inspiration and condensing them into a 75-minute performance, long by Israeli standards, proved challenging. Broeckx and Matteini incorporated dramatic stage and costume design to bring Goethe’s plot into the modern world. The piece manages to capture the desperation and irresistible temptation of Faust.As one of the star dancers of the company, Broeckx has come to understand the work from the inside and out.“For me, moving is a way to disconnect from all my worries and reconnect with myself,” she says.Broeckx will be joined on stage by celebrated Israeli dancer Ido Tadmor, who will play the role of Faust. This collaboration emerged after Tadmor had the opportunity to see Infaust abroad.“Our work seeks to create an emotional connection with the audience. Ido Tadmor confessed that even days after seeing the performance, his mind kept going back to images of the show. Such a deep impact the show had left on him,” Broeckx says.

“Infaust” will be performed on June 1 to 3 at the Tel Aviv Performing Arts Center. For more information, visit www.israelopera.co.il.
Advertisement
Subscribe for our daily newsletter