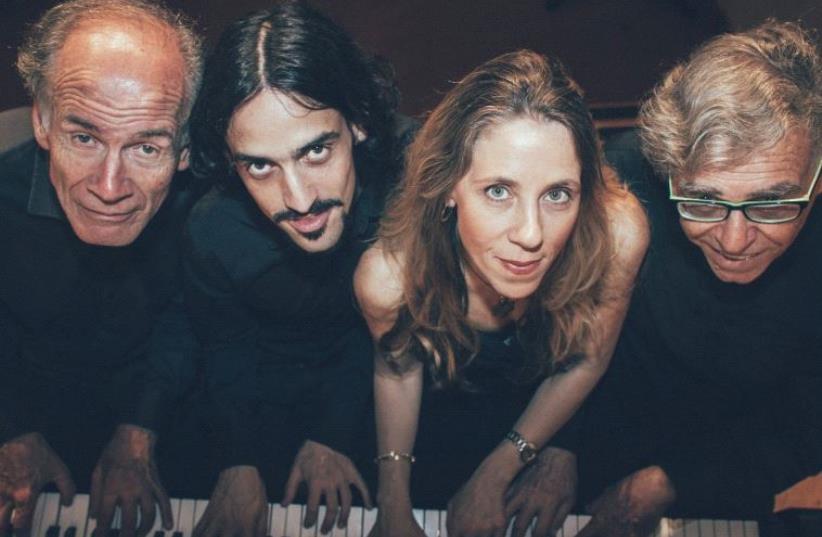 The Octopus Quartet
(photo credit: ILAN SHAPIRA)
Advertisement
Quite an unusual concert will take place on September 10 at Recanati Hall of the Tel Aviv Museum of Art. Octopus – The Israel Pianists Quartet, together with veteran oud player Taiseer Elias, will present the world premiere of Metamorphosis, a new piece for oud and piano quartet by Zvi Avni. The program also features Brahms’s Serenade No. 2 op. 16, with actor Alex Ansky reading excerpts from the composer’s letters; Bach’s Toccata and Fugue; and Liszt’s Hungarian Rhapsody No. 9.The piano quartet consists of Meir Wiesel, founder of the ensemble; his longtime partner Burt Berman; and two younger pianists Yifat Zaidel and Tavor Gochman.The idea of creating a quartet of pianists came to Wiesel by chance.“Three years ago I was watching a film at a movie theater and was captivated by the soundtrack. It included an incredibly rich piano performance of Bach’s Toccata and Fugue. Who is the pianist, I wondered, before reading in the credits that it was not a single piano player but a quartet. When I got home, I said to my wife, ‘I want that, too!’” he recounts.A few months later, Octopus was inaugurated and gave its premiere performance at Clairmont Hall in Tel Aviv.“Here are the ideas behind the quartet,” explains Wiesel. “First, there many beautiful and lesserknown classical pieces; to perform them, one needs a symphony orchestra, which is not always possible. But they still sound great arranged for an ensemble like ours, and you can share them with the audience with less investment.There also are original pieces by local composers. The first one we played was the impressive Perpetuum mobile by Bardanashvili.In 2014 we participated in the Feast of Israeli Music, adding a piece by young composer Eran Askenazi to our local repertoire.”Metamorphosis is the third Israeli piece to be performed by Octopus.“The rationale behind this piece is to create a new fabric of sounds, new colors, new connections and interactions – the richness of pianos, played by eight hands, and oud, which is the total opposite – modest, monophonic. And, of course, East meets West. Where else if not in Israel?” he says.“I always try to bring unusual programs to the audience. This time, in addition to Zvi Avni’s piece, we will perform Brahms’s Serenade, a piece in five movements. Years ago I came across a book by Karl Geiruinger about Brahms, translated into Hebrew by Shimshon Inbal in 1995. He translated the composer’s letters into an archaic Hebrew, which is music in itself. I asked actor Alex Ansky to read it between the movements,” he says.Octopus performs in Israel, but later this year, with the support of the Lottery Authority, the quartet will tour Montenegro.Born in Morocco to a family of Holocaust survivors, Wiesel moved to Israel in his early childhood. A multifaceted personality, he studied piano and mathematics in Israel, then graduated from the Juilliard School of Music in New York as orchestral conductor and got his PhD for research work in conducting. After teaching at the Manhattan School of Music, he and his wife – a specialist in museums – returned to Israel, where he has dedicated himself to educating the young generation of musicians, as well as performing.“I headed The Youth and Music for 30 years, including the international organization,” he says. “It was such an experience! I organized summer camps for young musicians, and I was the founder of the Arab Jewish Youth Orchestra, headed by Taiseer Elias.”The concert takes place on September 9 at the Tel Aviv Museum of Art. For tickets: www.kupatbravo.co.il; *3221; 072-275-3221; 053- 555-4072 Two additional concerts will take place in the North. The program does not include Avni’s piece. August 27 at 10:30 a.m. at Kibbutz Ein Hashofet; September 3 at 8:30 p.m. at the Dunia Weizman Conservatory in Haifa.