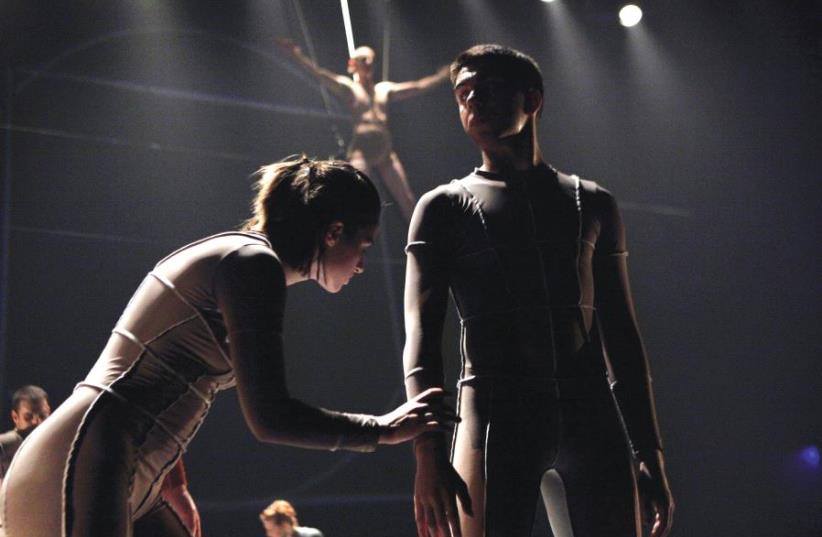 FRESCO DANCE Company’s ‘Golden Ratio’
(photo credit: EYAL LANDSMAN)
Advertisement
Of all the obsessions of mankind, none has inspired as much creation or brought about as much destruction as the pursuit of perfection. The ideals of beauty, of love, family, divinity, have driven people mad since the beginning of time, pushing humans to the edges of their physical and mental capacity. Perfection looms above us all, at times an invocation to do better, at others a crushing weight.Yoram Karmi is well versed in both these aspects of perfection. On one hand, the pursuit of it has propelled him to create a thriving dance company, open a new dance center, choreograph dozens of works and live a healthy and ambitious lifestyle. One the other, the pressure to be perfect has caused countless sleepless nights, an exhausting daily pace and a nagging dissatisfaction with anything less than the best.In his newest work for Fresco Dance Company, Golden Ratio, Karmi literally hangs perfection in midair.“The actual final idea did not happen initially,” says Karmi over the phone. The company is taking its morning break following a rigorous ballet class and Karmi has ducked out to chat about the upcoming premiere. Karmi, who will turn 50 later this month, shows no signs of aging or slowing down. On most days he can be found clad in black athletic gear and jazz sneakers, gliding through the newly renovated Fresco Dance Center in the Central Bus Station in south Tel Aviv.With his knack for perfect timing, both in and out of the studio, Karmi struck a nerve in the dance world this year with the opening of his center. Just as two of the major dance hubs closed their doors, Karmi opened his, assembling all the recently displaced choreographers and dancers in his spacious studios. Nowadays, alongside the workings of Fresco, Tel Aviv’s top independent choreographers can be found sipping coffee in the lounge before heading into rehearsal.“We were working in the studio, the dancers were working with texts from all kinds of places and we were talking about biological process, heartbeat, indigestion, lungs and what happens when they go wrong. While we were working, things emerged, and I realized that everything in the studio, in the dancers’ lives, in my life, is all about reaching points, about being the best you can be. The Vitruvian Man popped into my head. I started reading about it. I found the text that Da Vinci wrote and that it’s not his drawing, but rather a variation on a drawing by Vitruvius.”In the drawing, a man’s form is seen inside a circle, representing the farthest reaches of his limbs. This sits inside a perfect square, a geometrical ode to the human shape.“The human inside the divine circle has so much meaning, its philosophical representation of the place of human body and spirit in the evolutionary ladder from beast to god. I thought about the poor person who was drawn in 1492 and the 600 years he has been locked in perfect formation. Is it comfortable? So, I asked the dancers to try to keep this form and we discovered that it’s excruciating.”This image became the central line of his piece and, as such, Karmi decided to put it on stage.“We hang someone on stage that barely moves for the entire piece. He’s locked inside square inside a circle. He’s going through a very difficult emotional and physical process in that hour.”The Vitruvian dancer has four positions he can move between, all of which require an intense level of physical and mental engagement. The rest of the cast move in relation to this man, constantly observing and challenging the ties that bind them together.“The piece moves from the collective harmonious movement of the group where the whole is bigger than the parts, and then it separates into little pieces, from exploring physical perfections and imperfections to the idea of how we relate to what we see as iconic,” explains Karmi.Though the piece has already had its pre-premiere and is about to be officially unveiled, the process is far from over for Karmi.“It was a hard labor this one,” he says with a laugh. “The piece is still revealing itself. I’m falling in and out of love with different moments but it’s not blinding love. It’s very realistic. Sometimes you see that you were falling in love with an idea and two weeks later it’s not as strong as you thought. It’s still very much a living process.”Golden Ratio will be performed at the Suzanne Dellal Center on July 18 and 26. For more information, visit www.suzannedellal.org.il.