Recently 1984 has once more been selling like hotcakes, impelled (it would seem), by such events as the election of US President Donald Trump and the rising tide of populism. 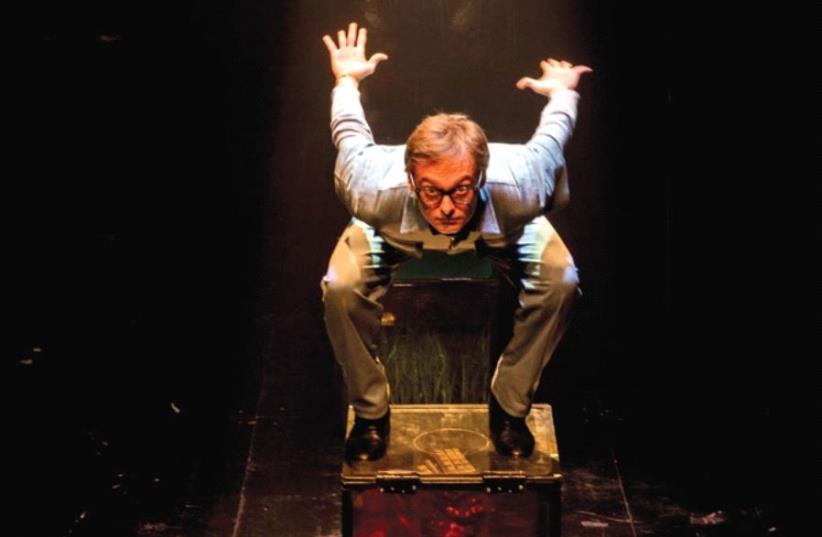 In 1984 George Orwell sounded an alarm bell that is tolling again today. He wrote it in 1948, basing its world roughly on Stalin’s USSR, the awfulness of which wouldn’t fully be revealed until Khruschev’s disclosures at the 20th party congress in 1956. Recently 1984 has once more been selling like hotcakes, impelled (it would seem), by such events as the election of US President Donald Trump and the rising tide of populism, and revelations by Wikileaks.This production of the play is performed on a small stage in the intimate space of Bertonov Hall at Habima, which is itself ironic because intimacy is proscribed in Oceania’s brave new world. Then there’s the symbolism of Paulina Adamov’s Rubik’s Cube set – a series of interlocking, transparent cubes that serve both as storage for props and/or memories as well as the story’s various venues. Rubik’s Cube has some 43 quintillion possible permutations, but only one solution, like the one permissible way of life in The Party’s orbit. Behind the cube is a globe of various-sized screens from which – amid the rest of Guy Romem’s excellent and unsettling videos – Big Brother’s all-seeing eye glares balefully.But there’s an added dimension: we are watching through the eyes of a group of identically-clad people from 2084, and they aren’t sure – is this a fiction? We know the story. Outwardly, Winston (Alex Krul) and Julia (Oshrat Ingedashet) are enthusiastic, compliant, gray-overalled cogs in The Party’s debased, dehumanized world. Inwardly, perilously, they are rebels. Not only does Winston keep a diary, he and Julia are in love. Cardinal sins both. They snatch greedily at joy knowing beyond doubt that they will be caught.Their nemesis and merciless embodiment of the regime is O’Brian (Gil Frank), who swiftly breaks them utterly. Now they are become perfect citizens. They love Big Brother devotedly.Krul and Frank have worked together before, as Oedipus and Creon in Sophocles’ Oedipus. There it was as patient and healer; here it’s victim and torturer.Krul’s Winston is at once fearful and reckless, bold and timid, his body language reflecting his moods. There’s a wonderful moment when he takes off his overalls; it’s like a butterfly emerging from its chrysalis. I do wish he’d pay the same attention to his voice. There are many nuances between conversation and shouting.As Julia, Ingedashet is out of her depth. She’s very much at home with the physicality of her role, but not with the tempestuous inner life that impels Julia to rebel.Uri Hochman’s Tom Parsons is touching as time and again he extols the regime and his daughter, even desperately exalting her betrayal of him, while in the dual role of antique shop owner and food server Shahar Raz is suitably diffident as the former and crawlingly servile as the latter.Then there’s Gil Frank. His chillingly colorless O’Brian becomes the more frightening the more he seems to efface himself physically. He never raises his voice, speaking sweetly, reasonably, regretfully. He is the perfect avatar of the regime, an Eichmann. Frank grows with every role he undertakes and to this ambitious, hard-edged yet too remote production he gives needed depth.
Advertisement
Subscribe for our daily newsletter