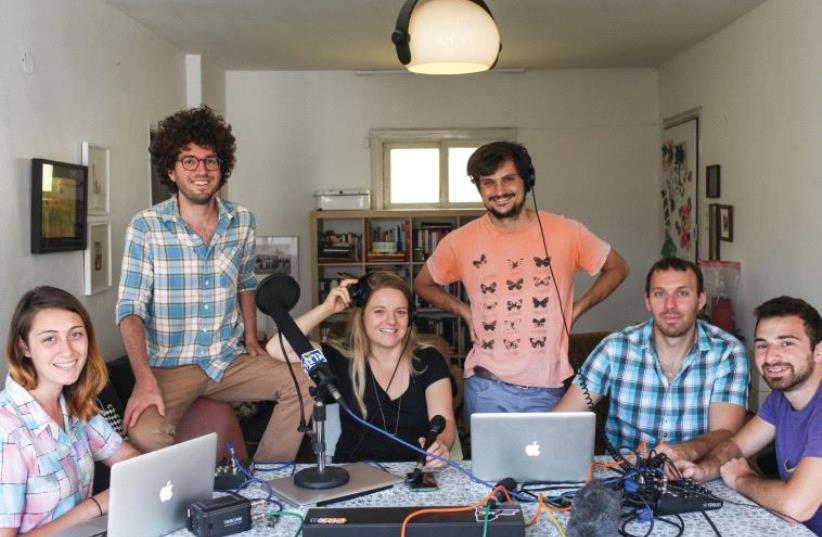 RADIO DAYS: From left; Barry Finkel, Mishi Harman, Maya Kosover, Yochai Maital, Ro’ee Gilron and Shai Satran.
(photo credit: AVISHAG SHAR YASHUV)
Advertisement
For fans of This American Life and Radiolab, Israel Story provided an answer to the question, “Why don’t we have anything like that in Israel?” Childhood friends Ro’ee Gilron, Shai Satran, Mishi Harman and Yochai Maital saw that there was an opening for a quality, non-fiction radio show that could capture the complexities of Israeli life and all the truth-is-stranger-than-fiction stories that epitomize it. Thus Israel Story was born. Begun as a small podcast in 2014, it was quickly picked up by Galei Tzahal, Israel’s leading national radio station, and has enjoyed a successful prime-time slot ever since. Israel Story will be featured in Jerusalem’s Mekudeshet Festival from September 5-15 at St. Andrew’s Scots Memorial Church in a mutli-show event that blends radio with theater, titled A Matter of Life and Death. Maital sat down with The Jerusalem Post to discuss Israeli news in English, his favorite episode from this year, and being a part of the Mekudeshet Festival.How did your ‘Israel Story’ begin? We started it as four childhood friends. I was in the army for nine years; I was an officer. I didn’t think I would ever find myself in radio. Mishi and Ro’ee had just come back from the States, where they went to study abroad, and while they were there, they started listening to This American Life and Radiolab. They figured out quickly that there was nothing even remotely like that in Hebrew. So they came back with this idea to try and do that. They got me and Shai together, and we all decided that we were going to do it. We didn’t know anything about radio, so it took us about a year to put out the first episode. We got in touch with the people from This American Life and it turned out that one of the senior producers lived in Tel Aviv at the time. They were really nice and not upset at all about us doing a copycat idea. They even had us over there for a short internship to learn the basics.Mishi became our host, and he has a healthy dose of Israeli chutzpah. From that, we got picked up by the radio and the rest is history. We did our first season in Hebrew in 2014 without any funding. After the success of the first season, we got funding from the Spielberg Foundation, and that’s how we became an NGO. We decided to start doing an English podcast alongside the Hebrew one, and we just finished our second season in English. The reason for that was twofold. It was obvious that a lot of American Jewish funding would be interested in Jewish content coming from Israel into the Diaspora, and also we felt like we had a place within the English-language media in Israel. It’s either focused solely on the conflict, or on Israeli start-ups and high tech. We really felt that none of that captured the complexity and the beauty of this region in the way that what we do has the potential to when it’s done right. We tell personal stories that enable us to be critical but not damning and portray an interesting picture of what reality looks like in Israel from many different perspectives.What has the feedback been like from listeners? We’ve gotten a lot of good feedback. For me, it was surprising to learn that we have a lot of listeners from different sides of the political spectrum. It’s not a Left or a Right show.Can you highlight one of your favorite episodes? At this point, there are so many stories that it’s hard to keep them all in my mind, but there are some that stand out. In episode two of the our most recent season, we tell the story of Chaya Ben-Baruch. She grew up in an Orthodox-lite house in New Jersey and ran away from that to Alaska to get married to a non-Jewish professor. They had a bunch of kids, then got divorced. She then got remarried to this Catholic fisherman and they had more children, the third of which had Down Syndrome. Chaya went to a conference for parents of children with disabilities and one of the parents really moved her with a story of autistic twins whose journals were discovered after they died. The mother discovered from their journals how lucky they were to have each other. This gave Chaya the idea to adopt another baby with Down Syndrome and her husband agreed.They ended up moving to Israel because there was very little support in Alaska. They were put in an absorption center in Safed. Eventually, by accident, the husband wandered into a yeshiva after one of the children had run inside. He walked in and saw how the men inside were looking after his child and were really sweet to him. That started his slow process towards converting to Judaism. Both of them became ultra-Orthodox and they adopted more children with Down Syndrome. They now run an organization that connects families who want to give up Down Syndrome babies to families who want to adopt them.It’s an amazing story, but we have a lot of amazing stories. The reason why I brought up this one is that after the episode aired, we had people contact us, asking how to get in touch with Chaya, which resulted in more babies being adopted. So that was really special for us to feel like we made a specific impact on people’s lives.

Can you describe what ‘Israel Story’ is doing for the Mekudeshet Festival?

We chose a concept, “life and death,” and then chose stories that approach that concept from different directions. We have three stories total. One is about an old man from Givatayim and his legal battle to have his body fed to wild animals after he died. He had a strong opposition to cemeteries and so he wanted to give his body back to the earth. He fought a really harsh legal battle and while the initial request was rejected, he came up with another idea and eventually succeeded. His son carried out his will recently and they threw him out to sea.

How do you feel about being a part of the Mekudeshet Festival?

We are really lucky to partner with Mekudeshet. We did a much smaller show about neighbors last year on Mishi’s balcony.It was a huge success. We sold out four shows and ended up adding more. So we were lucky to be invited again this year for eight shows. We’re really excited.For more information or to download episodes, go to http://israelstory.org/en/. Also for more info on the Mekudeshet Festival visit http://en.mekudeshet.com.