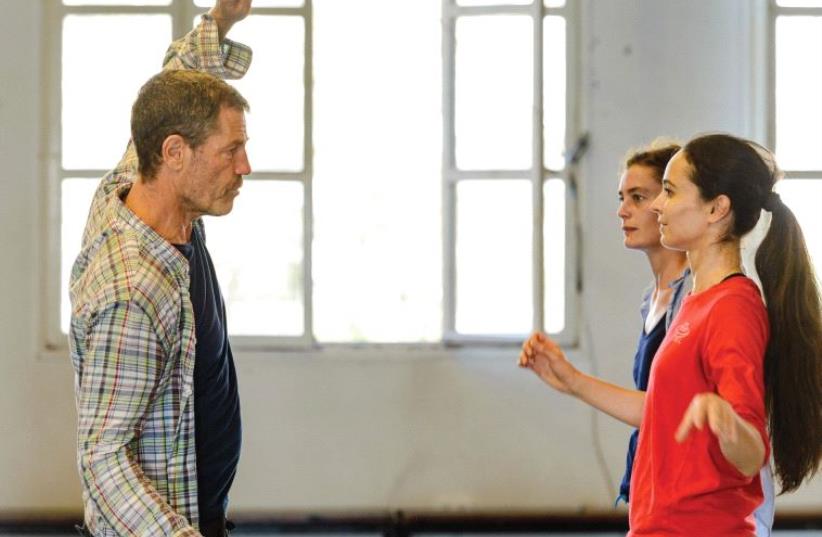 DIANA VISHNEVA (right, in red) and Aurelie Dupont seen here with Ohad Naharin rehearsing Naharin’s 2008 duet ‘B/olero.’
(photo credit: URI RUBINSTEIN)
Advertisement
It is possible that, 40 years from now, the rehearsals that took place last week in Studio Varda will be included in dance history textbooks.Over the strange interim period between Jewish holidays, perhaps the quietest of all periods in the Batsheva Dance Company studio, three of the world’s greatest and most influential dance artists, Ohad Naharin, Aurelie Dupont and Diana Vishneva, got together in one large room.Dupont and Vishneva are in Israeli rehearsing Naharin’s 2008 duet B/olero, which they will perform as part of the annual Context Festival in Moscow next month.“It’s really nice to dance, it’s been a while since I spent my whole day dancing,” says Dupont as she walks through the Suzanne Dellal Center. Dupont, 43, is the newly appointed director of the Paris Opera Ballet. In this role, the star dancer finds herself more often seated at the front of the studio rather than twirling through it.“Usually, I do class in the morning and that’s it.”Dupont and Vishneva make their way toward a local café for a quick pick-me-up in the midst of their rehearsals with Naharin. Their hours are long and the pressure to absorb as much information as possible in the limited time they have is high.“We have just a week to work,” says Dupont over fizzy lemonades and cigarettes at Dallal Cafe.Stashed in her tote is a bag of peanut M&M’s, which she plucks out gracefully. “We learned the entire duet in two days. We are working long hours, taking Gaga class in the morning and then working with Ohad and his dancers for the rest of the day.”“It’s amazing to share work time with such experienced people,” adds Vishneva.“The dancers have been incredibly generous with us,” says Dupont.Vishneva, 40, hails from St. Petersburg. She is a principle dancer with both the Mariinsky Ballet and American Ballet Theater. In addition to dancing lead roles in dozens of acclaimed ballets, Vishneva is the director of the Context Festival and the Diana Vishneva Foundation.For Vishneva, dancing Maurice Bejart’s Bolero is a major milestone.In 2013, she became the second Russian ballerina to ever do so. Her predecessor, Maya Plisetskaya, was handpicked by Bejart 40 years prior.“Everyone wants to dance the Bolero,” she says. “It’s a big statement.”Dupont has risen in the ranks of the ballet world quickly and with great momentum since her early years, a task she admits to seeing as something of a game.“When I joined the Paris Opera Ballet, I saw it as a kind of hill that I had to climb. There was a clear hierarchy and I moved along it. I didn’t experience it as difficult, I knew what I had to do and I did it.”Over 20 years ago, Dupont had the opportunity to dance in a work of Naharin’s. At that point, she was just beginning to earn a name for herself as a soloist and Naharin had only recently returned to Israel from New York City.“I really wanted to do his work. It took 23 years for us to meet once again. Sometimes, it’s about timing. Sometimes you dance something when you are too young to understand it, sometimes you dance something when your body is too old to do the movement as you’d like. It’s about everything coming together, who I am as a woman, as a dancer, as a person, in the right timing to make for an amazing performance.”Though full of confidence and, of course, poise, when outside of the studio, inside the two ballerinas are fully concentrated and seemingly without ego. Naharin’s voice stays just above a whisper the entire rehearsal. He gathers them together every so often to comment on a particular movement.They share smiles and then snap back into place to run one of the many complex sections of B/olero.At one point, Naharin requests that they start from a specific point in the piece. One movement in, he asks his assistant to cut the music.As he walks to meet them toward the back of studio, the dancers smiling, aware of the influx of corrections they are about to receive.While both dancers have performed works by contemporary choreographers, Naharin’s language is perhaps the furthest from ballet vocabulary they have strayed. Movements that would baffle most contemporary dancers are second nature to these ladies and vice versa. A repetitive grabbing gesture sends them into a spiral of corrections.“Look at your hand,” instructs Naharin as the two continue trying the grabbing gesture. “But you’re not looking,” he adds just a moment later. The tone between the three stays light yet professional.Each woman has her own strengths and weaknesses, her own interpretation of the music and movement quality.Dupont and Vishneva, though operating in different countries, have crossed paths many times over.“We are of the same generation; she was becoming a star as I was becoming a star. We performed at many galas together,” explains Dupont.The kind of communication that they have been able to foster is quite new in their circles.“Before our generation, this kind of thing didn’t happen. Dancers worked in their companies and they didn’t meet or work together outside of that,” says Dupont.“The best thing about this project is that we will perform together,” beams Vishneva. “I really trust her and I am enjoying being beside her in the studio very much.”For more information about the Context Festival, visit www.dianavishneva.com.