To believe or not to believe

Roy Assaf’s new piece reveals a lot about the dancers– or does it? 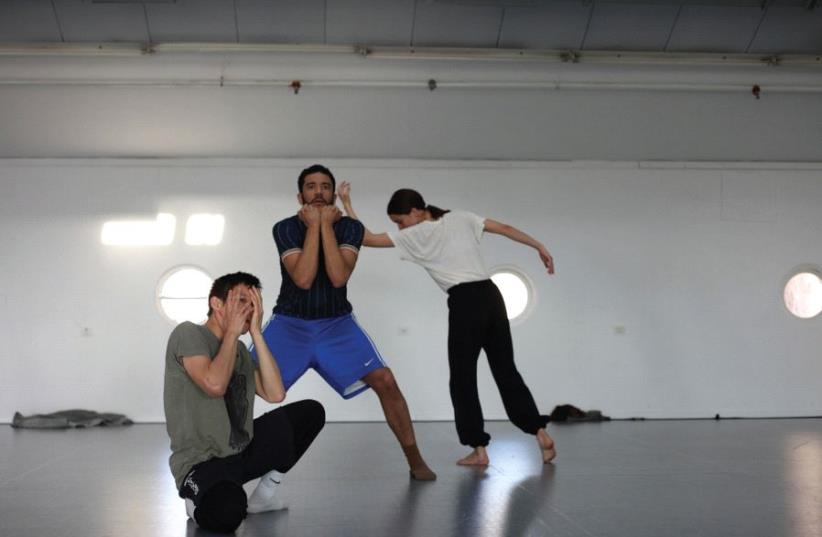 Roy Assaf's ‘II Acts for the Blind’
(photo credit: BEN GOLDBERG)
Advertisement
In every performance, movie or television show, there is a question of believability. Do we really believe that the actress on screen is a mother of three? Is that dancer actually in love with his partner? As audiences, we are asked to suspend disbelief, to buy into a plot or narrative and allow the director or choreographer to take us on a journey.In his new work, which premieres next week at the Suzanne Dellal Center, choreographer Roy Assaf masterfully plays with the fine line between true and false. II Acts for the Blind is the most text heavy of Assaf’s works to date, employing actor Yiftach Mizrachi as a narrator, telling all the gruesome details or possibly a string of lies about the dancers on stage.From the first moment of the piece, Mizrachi is heard recounting the stories of each dancer. The cast – Madison Hoake, Sergio Diaz, Joel Bray, Kelvin Wu, Anat Oz, Olivia Court Mesa and Avshalom Latucha – enter center stage in turn to the lilt of Mizrachi’s melodic voice. We are told that Madison the Miserable, for example, relocated to Tel Aviv after losing her love.Avshalom the Hero was an outstanding soldier who displayed bravery and physical prowess on the battlefield. Olivia followed her heart to Israel, only to have the man she loved leave her to become a cantor in Sweden.For the viewer, it is utterly unclear which, if any, of these details are fact and which are fiction. It is possible that Assaf has woven together an intricate web of lies and that the audience is meant to fall for them. It might also be that the tales are true and that Assaf is providing us with a rare glimpse into the private lives of his chosen collaborators.Looking at the cast of II Acts for the Blind, one gets a sense of temporary dislocation. It is impossible to tell by scanning the seven dancers which country the work takes place in and what language they might speak to one another. While the entire cast is based in Tel Aviv, only two of the performers hail from Israel. The others have been transplanted from Chile, the US, France and Australia.This choice, made very deliberately by Assaf, puts the creation in a no-man’s-land. It does not take place in Israel, does not commit to one language, cannot be understood all at once.II Acts for the Blind follows Assaf’s commission for the Batsheva Dance Company, Adam, which premiered last season together with Ohad Naharin’s restaging of Yag. The work featured 12 dancers from the main company. Throughout the creation, the dancers named the body parts that were activated by their movement.At times, this score fostered humor; at others, intimacy and even sadness.Back on his own and amid a tumultuous year for local choreographers, Assaf gathered together resources and energy and went back into the studio with his seven dancers, actor and rehearsal director Oz Mulay. The team spent a short five weeks together, working intensively. At first, Assaf planned to restage segments from creations made for companies abroad, such as Profundis (made for the National Dance Company Wales). However, once in the studio, he abandoned that plan and began creating new material. Die-hard fans might recognize familiar phrases from past works; for example, Avshalom Latucha performing a sequence that evokes The Hill.II Acts for the Blind continues many ideas that Assaf has experimented with in the past.Similar to Girls and Boys, the dancers vocalize and even sing at times in the piece. They join in with Mizrachi’s narration, calling out “with liberty and justice for some.” The use of not just their expressive bodies but also their voices gives the dancers a threedimensional quality, allowing them to convey themselves as real people rather than actors in a play.But the question remains, how much of what Mizrachi tells us about them is true? Can we suspend disbelief or does Assaf want us to question belief itself?‘II Acts for the Blind’ premieres on March 16 and 17 at the Suzanne Dellal Center in Tel Aviv. For tickets: www.suzannedellal.org.il