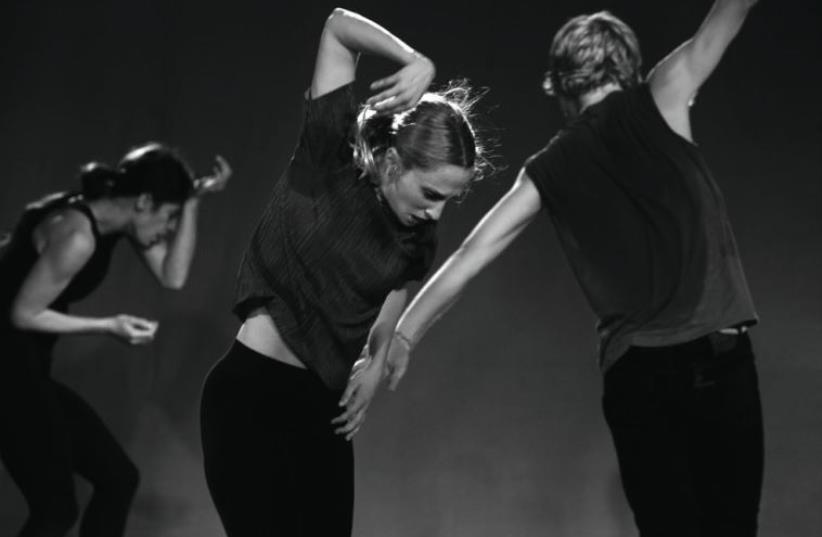 Sounds Like Yourself, by choreographer Michael Getman.
(photo credit: EYAL LANDSMAN)
Advertisement
1. FILM: SIBLING RIVALRYIn the action comedy The Brothers Grimsby, a dim-witted English soccer hooligan reunites with his long-lost brother, MI6’s deadliest assassin, to prevent an imminent global terrorist attack and to prove that behind every great spy is an embarrassing sibling. With Sacha Baron Cohen, Mark Strong, Penelope Cruz.2. DANCE: WILDE AT HEARTFor his new work Sounds Like Yourself, choreographer Michael Getman delved into Oscar Wilde’s letters from prison. Created for Yoram Karmi’s Fresco Dance Company, the piece tracks emotions from thoughts to writing and finally to movement. The Holon-based company, established by Karmi in 2002, has become known for its distinctive aesthetic.

5. CHILDREN: THE MANE STORY Holon Mediatheque Theater presents its 200th performance of The Lion of the Library, a play by Eli Bizow, based on the popular book by Michel Knudson, and directed by Roni Pinkovitz. The play tells the charming tale of a lion who makes himself at home in the library, enjoying story time and cleaning the encyclopedias with his tail – until he gets into trouble...Today (Thursday), 5 p.m., 6 Golda Meir Boulevard, Holon. Tickets: www.mediatheque.org.il

6. EXHIBITIONS: SPINNING THE POTTERY WHEELThe Tel Aviv Museum of Art presents Israeli video artist Ben Hagari’s new work Potter’s Will, comprising a video and a sculptural installation: a rotating set of a 19th-century potter’s studio extracted from the film screened next to it. In the video piece, Hagari revisits the potter’s wheel, delving into ancient myths pertaining to the birth of the pot, the birth of man, creator and creation.Ongoing at the Tel Aviv Museum of Art. Info: www.tamuseum.org.il 7. THEATER: CURSE OF CAIN The Hullegeb Israeli-Ethiopian Theater Ensemble presents its production of the drama The Mark of Cain, which premiered at last year’s Hullegeb Festival in Jerusalem.The play revolves around a family of Ethiopian origin. The father decides to abandon them and return to Ethiopia, while the mother and her three children find themselves on a slippery slope where their personal stories cross. Written and directed by Moshe Malka.Tonight (Thursday), 8 p.m., Suzanne Dellal Center, Tel Aviv. Tickets: www.suzannedellal.org.il8. FESTIVALS: DANCING IN THE STREET The Live Street Festival is an annual event, featuring 70 street performers from Israel and abroad at 20 locations along the Eilat boardwalk. The festival includes many street art performances, such as circus shows, juggling, flea circus, street theater, live sculptures, acrobats, parades, live music and street parties. Also on offer are artistic activities for children and special sales at the promenade shops.Friday and Saturday, 11 a.m. to 3 p.m. on the North Promenade (from Beit Hagesher to Herods Hotel). Info: www.redseaeilat.com 9. FESTIVALS: RAISE YOUR GLASSESMore than 40 wineries will be exhibiting at the fifth annual Jerusalem Kosher Wine Festival. Along with the tastings, local and international wine authorities will give short workshops on such subjects as wine competitions, blind tasting, sparkling wines, new grape varieties and importing kosher wines. Some of Israel’s top chefs will give sessions on cooking with kosher wine. Participants will receive a complimentary wine glass to carry from booth to booth. Entrance NIS 90.Wednesday through Thursday, 5 p.m. to 11 p.m., International Convention Center, Jerusalem. Info: www.pyup.co.il

10. UPCOMING OPERA: IF THE BRACELET FITSThe Israeli Opera presents its production of La Cenerentola, Rossini’s muchloved take on the Cinderella story. In Rossini’s version of the classic fairy tale, the stepmother is a stepfather, and the glass slipper is a gold bracelet. Rossini composed the opera in three weeks when he was 25. Italian mezzo-soprano Analisa Stroppa plays the title role, and US tenor Kenneth Tarver performs as the prince.March 18 through April 2, Opera House, 19 Shaul Hamelech, Tel Aviv.Tickets: www.israel-opera.co.il