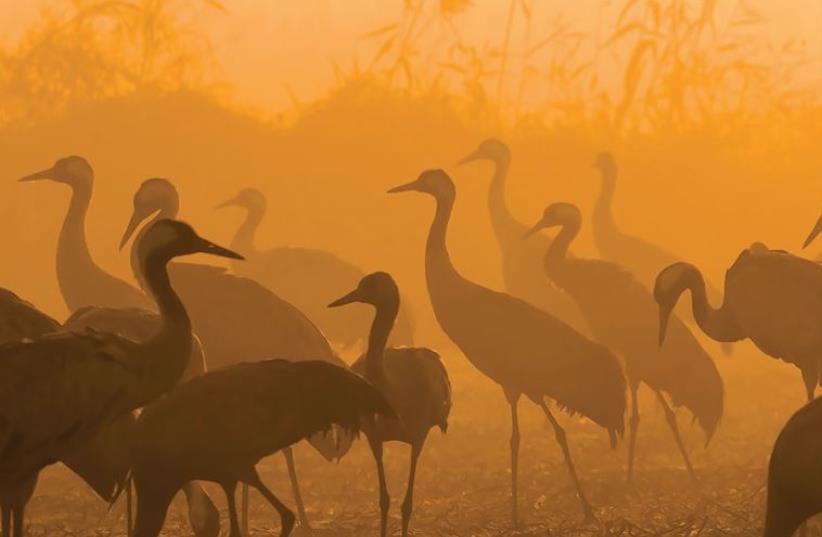 Tel Aviv’s Eretz Israel Museum presents Wildlife Photographer of the Year exhibition
(photo credit: PR)
Advertisement
1. FILM: THE BEAR NECESSITIESDisney is bringing back The Jungle Book in a live-action remake directed by Jon Favreau.The story follows Mowgli, an orphan boy, raised in the jungle with the help of a pack of wolves, a bear and a black panther. With Neel Sethi, Bill Murray, Scarlett Johansson, Idris Elba and Christopher Walken.

2. MIXED BAG: ART OF THE CONVERSATIONIsrael is once again gearing up for PechaKucha Night to be held at Tel Aviv’s Mann Auditorium. PechaKucha (Japanese for “conversation”) initiated in Tokyo in 2003 as an way for young designers to meet, network, and show their work in public. It’s become a bit of a phenomenon, with events happening in hundreds of cities around the world.The structure is simple: artists, musicians, filmmakers, designers and other creative cultural beings each have six minutes and 40 seconds to present their ideas.

3. ART: POWERLESS STRUCTURESTel Aviv Museum of Art’s flagship exhibition of works by Scandinavian artist duo Michael Elmgreen and Ingar Dragset includes eight thought-provoking installations placed throughout the museum. One of the two site-specific works on show is For as Long as It Lasts, 2016, a true-to-size replica of part of the Berlin Wall. The impressive installation serves as a symbolic reminder that all walls eventually fall, and new boundaries are created.Ongoing at the Tel Aviv Museum of Art.

4. EXHIBITION: A WALK ON THE WILD SIDE Tel Aviv’s Eretz Israel Museum presents Wildlife Photographer of the Year, the largest and most prestigious photography exhibition of its kind, initiated by the Natural History Museum in London and BBC Worldwide. The images in the exhibition were selected from more than 43,000 photographs submitted by photographers from all over the world. The exhibition will be shown alongside the local “A Photo of Nature #3” exhibition, featuring animals in nature in Israel, curated by Gali Gur-Zeev.Opens today. For more info: www.eretzmuseum.org.il

5. MUSIC: A TAL TALE Popular Israeli singer-songwriter Avraham Tal is known for his unique voice and his powerful and energetic concerts. The former vocalist of the band The Fools of Prophecy, will perform many of his hits as well as songs from his most recent album. Now Life at Tel Aviv’s Mann Auditorium Saturday, 9 p.m. For tickets: www.zappaclub.co.il

6. CLASSICAL: THE ENGLISH ORPHEUSThe Jerusalem Baroque Orchestra, directed by Andrew Parrott (pictured), will perform a series of concerts dedicated to the music Henry Purcell. Born in 1659, Purcell became a leading influential figure in the development of English classical music.His most famous works include Dido and Aeneas, The Fairy Queen, and King Arthur.

7. MUSIC: GET INFECTED Internationally renowned Israeli psychedelic trance giant Infected Mushroom will celebrate 20 years of hits in a performance at Live Park in Rishon Lezion. Formed in Haifa in 1996 by Erez Eisen and Amit Duvdevani, Infected Mushroom has gone on to experience massive success among the psy trance and electronic dance community. The duo have twice ranked in the top 10 of DJ Magazine’s ’10 Best DJs,’ and have played at festivals around the globe including Coachella and Burning Man.Next Thursday, 8 p.m. For tickets: www.im-20.com

8. FESTIVAL: YIDDISH REVIVALThe Secondnd International Yiddish Festival will be taking place at the Suzanne Dellal Center in Tel Aviv featuring local performers as well as visitors from France, Germany, Sweden and the US. The festival begins with the Ra’anana Symphonette Orchestra hosting Swedish singer Louisa Linn and will end with a gala honoring beloved poet and composer Mordechai Gebirtig. Another highlight is German-Israeli singer Yoad Sorek (pictured) singing songs he learned from his grandmother Sima.

9. FESTIVAL: GEEK IS CHICThe first annual International Geek PicNic will take place during Passover at Jerusalem’s Sacher Park. The open-air festival will include attractions and gadgets that will excite the imagination of every tech enthusiast.Geek PicNic will celebrate robotics, science, space, 3D printing and out-of-thisworld art.

Runs April 25-27. For more info and tickets: www.geekpicnic.co.il 10. FESTIVAL: SPIRITUAL GETAWAYThe Zorba the Buddha Festival takes place every year at the Desert Ashram in the Negev.Uniquely spiritual, the festival features five days of meditation in a beautiful desert setting. It also includes workshops, musical performances, parties, theater, and time for relaxing in the peaceful desert.Runs April 26-30. For more info: www.zorba.co.il