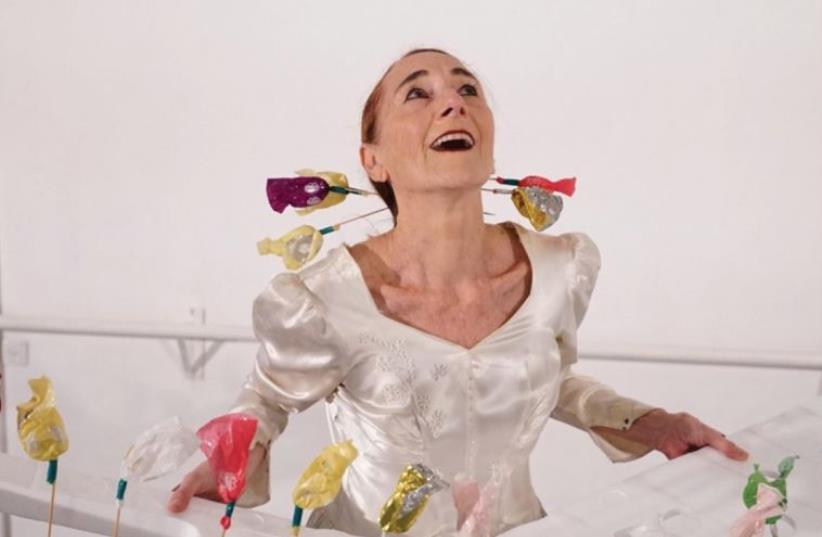 Dancer and choreographer Rina Sheinfeld
(photo credit: GADI DAGON)
Advertisement
1. SLIGHTLY OFF-KEYMeryl Streep stars in the film Florence Foster Jenkins, a biographical comedy-drama about a New York heiress who became an opera singer who was notorious for her lack of talent. With Hugh Grant, Simon Helberg, Nina Arianda, Rebecca Ferguson.2. GUITAR HEROAmerican guitar virtuoso Lee Ritenouris comes to Israel for a single performance. The Grammy-winning guitarist arrives as part of a tour to promote his new album “A Twist Of Rit,” released in 2015.Ritenour recorded more than 40 albums and is considered a virtuoso in his field because of his ability to combine musical genres such as jazz, funk and fusion. During his career, Ritenour collaborated with musical legends such as Frank Sinatra, B.B. King, Simon and Garfunkel, Aretha Franklin, Ray Charles, Barbra Streisand and Pink Floyd.May 31 at the Reading 3 club in Tel Aviv.3. LULLABIES OF BIRDLANDRenowned jazz pianist Anat Fort and her trio (bassist Gary Wang and drummer Roland Sneider) are coming to Israel as part of a tour celebrating the release of their CD Birdwatching. The launching concert is on June 2 at 9 p.m. at Hateiva in Jaffa. On June 4, the trio will perform adaptations of the work of Israeli writers Natan Alterman and Gideon Argov at the Ramat Gan Theater at 9 p.m.4. ARTISTIC APPROACH The Ariel Quartet (violinists Gershon Gerchikov and Alexandra Kazovsky, violist Jan Grüning and cellist Amit Even-To) performs works by Schubert, Hayden and Brahms. The concert will be preceded by a 30-minute lecture on art and music by Yonatan Ullman titled “Are You Done?” It is based on the exhibition “Unfinished, Thoughts Left Visible,” the much talked-about inaugural exhibition at The Met Breuer, the Metropolitan Museum’s new building.Saturday (tomorrow) at the Tel Aviv Museum of Art.For more information and tickets, call (03) 607-7070.

5. THE MAD PIPERAfter winning the hearts of local audiences, as he does all over the world, virtuoso organist Cameron Carpenter (35), who is known not only for his talent but also for his outrageous performances and appearance, returns to Israel to perform in Zichron Ya’acov.June 1 and 2 at the Elma Arts Center. For tickets and more details, call (04) 630-0123.6. LAUGHTER IN THE FACE OF TERRORAmerican comedians Ryan Hamilton, Ty Barnett and Sarge will perform in the biannual Comedy for Koby, beginning on May 29. Comedy for Koby is a stand-up comedy fund-raising event of The Koby Mandell Foundation, which benefits bereaved families and victims of terror. The tour is hosted by Israeli-born, Los Angelesbased comedian Avi Liberman.May 29 at 8:30 p.m. in Modi’in. May 30 at 8:30 p.m. in Beit Shemesh. June 1 at 8:30 p.m. at the Tzavta Theater in Tel Aviv. June 2 at 7 p.m. and 9:30 p.m. at Beit Shmuel in Jerusalem. June 4 at 9:30 p.m. in Gush Etzion. June 5 at 8:30 p.m. at the Herzliya Performing Arts Center. For tickets, go to www.comedyforkoby.com.7. TIME SENSITIVE“Ephemera” is a group exhibition of 14 artists from Jerusalem and environs. The body of work in “Ephemera” (which means “short-lived”) deals with different temporary aspects of life. Curated by Dvora Goldberger.The exhibition is on display until July 5 at Beit Shmuel in Jerusalem. Opening event today (Friday) at 11 a.m. in the Hirsch Theater Lobby.8. COME ON INThe ninth annual Open House event in Tel Aviv invites the public to explore the city in a series of unconventional tours, which include outstanding apartments, skyscrapers and studios. During one weekend, Open House opens up Tel Aviv’s private spaces for the public to view, discover and debate. Distinctive synagogues, gardens and even construction sites are included. A variety of contributors such as architects, developers and property owners participate.Today and tomorrow at various locations in Tel Aviv. Visit batim-il.org for a full schedule and location details.9. TOGETHER APARTDancer and choreographer Rina Sheinfeld (77) returns to the Suzanne Dellal Center with an evening that features her solo piece The Dancer Forgets a Step and a new group piece entitled Pizzicato. In the solo work, Sheinfeld interacts with wigs, masks, costumes, dishes, screens, balloons, video, music, spoken word, pieces of foil and more.