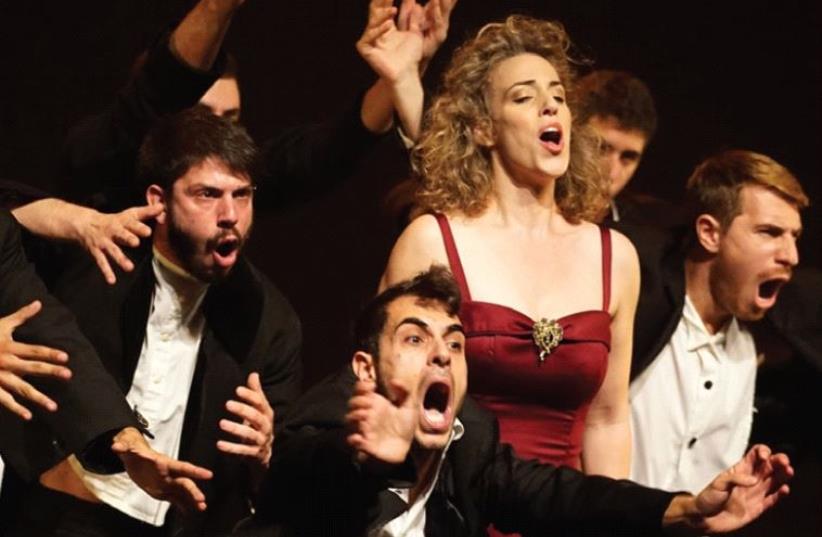 Itzik Galili's 'Man of the Hour'
(photo credit: GADI DAGON)
Advertisement
1. BOURNE AGAIN In the new film Jason Bourne, Matt Damon returns as the title character, but this time he finally remembers who he is. It’s been 10 years since he walked away from the CIA and, hoping to draw him out of the shadows, the director of the agency assigns a hacker and counterinsurgency expert to find him. The hacker suspects that former operative Nicky Parsons is looking for him as well. As she begins tracking the two, Bourne finds himself back in action, battling a sinister network that utilizes terror and technology to maintain its power. With Tommy Lee Jones, Alicia Vikander.At cinemas nationwide.2. DIFFERENT TRADITIONS Latino–Ladino, a project of the Israeli Opera as part of the Acre Opera Festival, explores the musical worlds of the Spanish, Jewish and South American traditions in an original combination of these remotely related musical traditions. The charm of authentic instruments, ranging from oud and viola da gamba to Baroque guitar and harpsichord, creates an enchanting experience of diverse musical traditions. Israeli Opera soprano Hila Baggio adds coloratura magic, with music by Handel.July 29 at 9 p.m., Opera Festival, Crusaders’ Court, Acre. 3. SPANISH SOUL MUSIC As part of the Danza Espana Festival at the Suzanne Dellal Center, the Ra’anana Symphonette Orchestra presents Concierto del Alma, a musical journey that explores the Spanish soul, from Bizet’s Carmen through Granada, Andalusia and Barcelona. Conducted by David Sebba.August 1 at 9 p.m., Suzanne Dellal Center, Tel Aviv.4. COLORS OF COLOMBIA The Samuel Torres Group, fronted by the Colombian- born percussionist and composer, performs in Zichron Ya’aacov. Torres, a Grammy Award recipient, will be joined by compatriot vocalist Maria Raquel and Argentinean bassist-vocalist Fernando Knopf, as well as a trio of local artists: saxophonist, clarinetist and flutist Gilad Ronen, pianist Gil Zohar and drummer Amir David.Tonight (July 29) at 10 p.m., Elma Center, Zichron Ya’aacov. Tickets and information: (04) 630-0123. 5. ELVIS IS IN THE BUILDING Lee Memphis King performs his “One Night of Elvis” show. The show has been performed in more than 30 countries to rave reviews.August 3, Haifa International Convention Center; August 4 to 7, Heichal Hatarbut, Tel Aviv.6. A FLUID FUSION OF FLAMENCO Internationally renowned artist Carlos Chamorro and his troupe Ballet Flamenco present a work inspired by water as part of the Danza Espana Festival. The work showcases a fusion of different flamenco approaches melded together, each with unique movements and rhythms, producing a powerful performance.August 4 to 6 at 9 p.m., Suzanne Dellal Center, Tel Aviv.7. THE RIGHT MOMENT IN TIME Israeli choreographer Itzik Galili returns to Israel after more than 20 years. In his opus Man of the Hour, individuals search the moment and a fragment of memory that will create a personal and national identity. Performed by Israeli dancers and opera singers. A co-production of the Israeli Opera, the Suzanne Dellal Center and the Festival of Netherlands.July 29 at 2 p.m., Suzanne Dellal Center, Tel Aviv.8. WORTH 1,000 WORDS The Tel Aviv Museum of Art presents an exhibition of selected works by American photographer W. Eugene Smith. He developed the concept of the photo essay and believed that photography could lead to constructive social change. His photo essays, published mostly in Life magazine, documented forsaken and ill-fated locations in the US and around the world. The exhibition of works from the museum collection focuses on single images from Smith’s major documentary series, which epitomize his social and artistic commitment.Until October 29, Tel Aviv Museum of Art. www.tamuseum.org.il.9. THE ART AND THE CRAFT The eighth Biennale of Israeli Ceramics opens at the Eretz Israel Museum this week. The exhibition examines the unique expressive contribution of ceramics to art and culture. It seeks to present a limitless inventory of possibilities of ceramic expression and all the stages of the life cycle of clay, from wet to fired, and all the ways of producing it from ancient times through contemporary innovations, which will make it possible to present the contribution of ceramics to the contemporary world of art. Curator: Eran Erlich. Opens August 1 at the Eretz Israel Museum, 2 Haim Levanon St., Ramat Aviv, Tel Aviv. 10. SECRETS OF THE AFTERLIFE The Israel Museum presents the only mummy in Israel, revealing surprising new details about life and death in ancient Egypt. The 2,200-year-old mummy and its elaborately decorated coffin, which were given to the Jerusalem Pontifical Biblical Institute in the 1930s by the Jesuits in Alexandria, are on loan to the Israel Museum for display and further study. The exhibition includes an embalmed ibis. Other related artifacts from the museum’s collections are on view as well.The Israel Museum, Jerusalem.