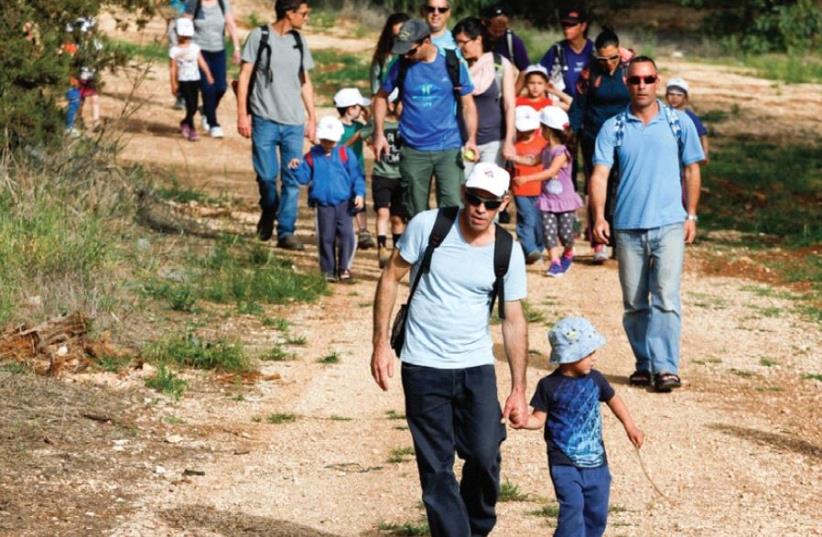 The 51st Gilboa Walk
(photo credit: PR)
Advertisement
1. THE NATURE OF THE BEASTDisney’s Beauty and the Beast is a live-action retelling of the studio’s animated classic film that revolves around Belle, a bright, beautiful and independent young woman who is taken prisoner by a beast in his castle. Despite her fears, she befriends the castle’s enchanted staff and learns to look beyond the beast’s hideous exterior. With Emma Watson, Dan Stevens.
2. LIFE ON MARSIn the new sci-fi film Life, a six-person crew aboard the International Space Station discover the first evidence of life on Mars. As the crew begins to conduct research, their methods end up having unintended consequences, and the life form proves to be more intelligent than anyone expected. With Jake Gyllenhaal, Rebecca Ferguson, Ryan Reynolds.
3. RAPID RESPONSESThe Tel Aviv Museum of Art presents the exhibition and research project “3.5 Square Meters: Constructive Responses to Natural Disasters.” It displays ways that individuals and communities worldwide mobilize in response to catastrophes, such as life-saving information communicated as tweets or posts on social networks in the course of natural disasters; online journals documenting personal confrontations with disaster; and instructions for the construction of a temporary folding shelter or for selfadministered first aid. Ongoing at the Tel Aviv Museum. For more info: www.tamuseum.org.il
4. EXTRA, EXTRA!The Israeli Opera, in conjunction with the Royal Opera of Wallonie from Liege, presents Rossini’s La Gazzetta, which satirizes the influence of newspapers on people’s lives. The pompous Don Pomponio Storione travels the world in search of a husband for his daughter, putting ads in the newspapers, but he learns that this might not be the route to his daughter’s happiness.Wednesday through April 8. For tickets: www.israelopera.co.il
5. UNDER THE BIG TOP

The legendary Circus of Moscow – The Golden Circus is here in Israel, with its acts coming together in a feast of color, light and thrilling spectacle, with dizzying spins, breathless acrobatics and enchanting stage performances under a real circus tent. It will perform every possible circus favorite – the funniest clowns, the most daring acrobats, death-defying daredevils, aerial artists, balancers and much more.March 31 through May 6, Hayarkon Park, Tel Aviv. For tickets:*2207
6. A SHIMMERING LIGHTFirst produced in 2015 at an international arts festival in Shanghai and later staged in Beijing, the musical Shimmer has been called the Chinese version of Les Miserables. Shimmer tells the surprising story of the Shanghai rescue of tens of thousands of Jews during the Second World War. Shimmer is a bilingual musical, performed in English and Mandarin, with an original score inspired by music of the era, traditional Jewish and Chinese music and klezmer.Wednesday, 8:30 p.m., Heichal Hatarbut Modi’in. For tickets: hyxdticket@126.com (entry is free, but requires registration)
7. WEEKEND WALK The 51st Gilboa Walk is the last of the large popular walks still held in Israel and the only one that attracts participants from abroad. The Gilboa Walk offers three spectacular and fun tracks in varying levels of difficulty: 6 km. family route; a 13-km. popular route; and an international route, which spans more than 20 km. a day. The walk takes place in the spring, when the violet Gilboa Iris, one of the most beautiful flowers in Israel, is in bloom. Hikers can gaze also at the magnificent views surrounding the Jezreel Valley.Today and tomorrow. 6:30 a.m. to 1 p.m. For more info: http://landing.nm-digital.net/Gilboa-march
8. KEEPING IT FRESHFor the past nine years, the annual Tel Aviv-based Fresh Paint fair has been setting the tone for the upcoming year of Israeli contemporary art and design.This year’s fair is the perfect opportunity for galleries, art lovers and collectors to attend activities such as workshops, master classes, video art screenings and the unique Greenhouse, showcasing the works of selected independent Israeli artists.Tuesday through April 1 at the Steinhardt Museum of Natural History, Tel Aviv University. Info: www.freshpaint.co.il
9. FAKE THAT! The Haifa Museum of Art is proud to host multiaward- winning British photographer Alison Jackson in a cross-continent, cross-border discourse. Jackson is known for her convincingly realistic work that portrays celebrities doing things in private, using lookalikes.During this encounter, Jackson will talk about her often provocative works, in which our favorite celebrities (Princess Diana, Marilyn Monroe), as well as more controversial ones (Donald Trump), appear to be doing what we really, deep down, would like to see them doing.Saturday, 11 a.m., Haifa Museum of Art. For more info: www.hms.org.il
10. MASSIVE CONCERT AT MASADA

Legendary French electronic music pioneer Jean-Michel Jarre will perform a spectacular outdoor concert at Masada on April 6. The concert is part of a large-scale campaign to raise awareness about the environmental issues the Dead Sea is facing. Renowned for his use of staggering visuals and cutting-edge digital technology, Jarre has performed immense concerts in locations such as the Pyramids of Giza and has set and broken Guinness world records, including one for an audience of 2.5 million in front of La Défense skyline in Paris.For tickets and more info: www.jmj-israel.co.il