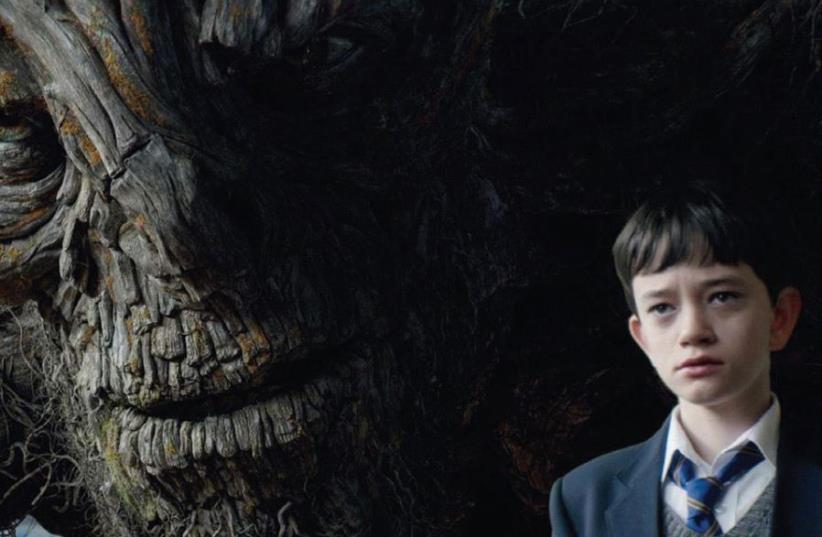 A Monster Calls
(photo credit: PR)
Advertisement
1. CREATURE COMFORT In the film adaptation of the award-winning children’s book A Monster Calls, a lonely young boy struggling with the imminent death of his terminally ill mother is befriended by a friendly, shambling monster that comes to his room every night to tell him stories. With Liam Neeson, Sigourney Weaver, Felicity Jones.2. MURDER MOST FOULIn the new French/Swedish thriller TV series Midnight Sun, the brutal murder of a French citizen sees French homicide investigator Kahina Zadi (Leïla Bekhti) go to Kiruna, Sweden. Together with Rutger Burlin (Peter Stormare), she begins an investigation that soon takes on staggering proportions.3. COME ON IN The 10th annual Open House event in Tel Aviv invites the public to explore the city in a series of unconventional tours, which include outstanding apartments, skyscrapers and studios. During one weekend, Open House opens up Tel Aviv’s private spaces for the public to view, discover and debate. Distinctive synagogues, gardens and even construction sites are included. A variety of contributors such as architects, developers and property owners participate.Thursday through next Saturday. Visit batim-il.org for a full schedule and location details.4. RACHELLE’S RHYTHM American vocalist Rachelle Ferrell is one of the most dynamic talents in contemporary pop music, with an impressive combination of range, phrasing and musicianship. Through the 1980s and into the early 1990s, she worked with some of the top names in jazz, such as Dizzy Gillespie, Quincy Jones, George Benson and George Duke.May 19 at 10 p.m., Tel Aviv Opera House. For more info: www.israel-opera.co.il5. EAT, DRINK AND BE MERRY The Banquet is a literary festival that brings poetry, food, magic, wine and love to center stage for four days of vibrant and stimulating experiences at Jerusalem’s Mishkenot Sha’ananim. It will include tasting events, performances, music, theater and workshops. Participating artists include Efrat Gosh (pictured), Shai Avivi, Gilad Kahana and Asaf Roth.Tuesday through May 19. For more info: http://mishkenot.org.il 6. ISRAEL ON DISPLAYOn show in the Tel Aviv Museum of Art’s Azrieli Architectural Archive is an exhibition presenting the architectural and thematic history of the Israel Pavilion at the International and Universal Exhibition held in Montreal in 1967. From the current vantage point, 50 years after both Expo 67 and the Six Day War, the Israel Pavilion in Montreal signifies a turning point in the official attitude towards the representation of Israel on the international scene.Ongoing until September. For more info: www.tamuseum.org.il

7. MAE THE FORCE BE WITH YOUInternationally renowned pop and classical violinist Vanessa Mae has joined the long list of artists slated to perform in Israel this summer. Mae was just in her midteens when she shattered the mold of the classical virtuoso with the release of her first fusion album, The Violin Player, forging a new style that has made her a multi-million-selling worldwide phenomenon. She describes her music style as “violin techno-acoustic fusion.”Thursday, 8:30 p.m., Caesarea Amphitheater, www.aticket.co.il

8. YOU DON’T WANT TO MISS A THINGLegendary American rockers Steven Tyler and Joe Perry and their Aerosmith bandmates will walk this way one more time, with a show on May 17 in Tel Aviv as the opening blast of their 2017 “farewell” world tour.Aerosmith is one of the most popular rock bands of all time, holding a place in the Rock and Roll Hall of Fame, with hits such as “Dream On,” “Crazy,” “Sweet Emotion,” “Love in an Elevator” and “I Don’t Want to Miss a Thing.”Wednesday, Hayarkon Park, Tel Aviv. For tickets: www.tmisrael.co.il 9. THE HILLS ARE ALIVE The biannual vocal music festival returns to Abu Ghosh near Jerusalem, bringing a host of concerts that take place in the Kiryat Ye’arim Church, as well as The Crypt. Highlights include a concert by the Delaware University Choir; tributes to Nana Mouskouri and Leonard Cohen; and Bach and The Beatles with the Vocal Octet.May 30 through June 3. For info and tickets: www.agfestival.co.il

10. LIKE CATS AND DOGS? Are you a cat person or a dog person? Who is truly man’s best friend? Are cats and dogs really natural enemies? “Cats and Dogs,” a new exhibition at the Israel Museum, is devoted to pets, as depicted in artworks from antiquity to the present day. Some of the works invite visitors to play, interact and even wag their tails. The range of artwork on display offers surprising perspectives on these animals and portrays the deep connections between cats, dogs and humans in both a critical and humorous light.

Ongoing at the Israel Museum, Jerusalem. www.imj.org.il
Advertisement
Subscribe for our daily newsletter