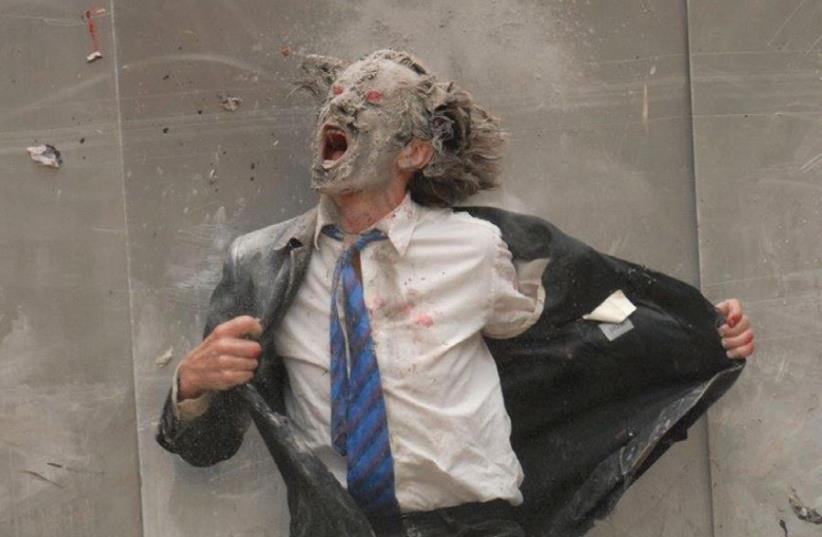 Art by French artist, painter, sculptor and performer Olivier de Sagazan
(photo credit: DIDIER CARLUCCIO)
Advertisement
1. DIGGING UP TROUBLE Tom Cruise headlines a new cinematic version of the legend of The Mummy. Cruise stars as Nick Morton, a man who awakens the ancient evil Ahmanet and becomes the conduit for her return to power. In his attempt to figure out how to stop the Mummy, Morton seeks the aid of Jenny Halsey and Dr. Jekyll. With Sofia Boutella, Annabelle Wallis, Russell Crowe.2. LIFE ON THE INSIDE  The popular TV series Orange Is the New Black returns with Season 5. It begins where Season 4 left off, with the female inmates of Litchfield Prison rising up against the guards. Said riot consumes the season, with the women taking control of the prison and establishing their own society within the confines of the cement walls. Starts Sunday at 10:50 p.m. on HOT HBO (H4) 3. A BOUNTY OF BOOKS  In conjunction with Hebrew Book Week, the 28th Jerusalem International Book Fair will take place on Sunday through Thursday at the First Station complex and other locations throughout the capital. The fair will include sessions with well-known authors such as A.B. Yehoshua and American historian and author Deborah Lipstad, writing workshops, and performances for the entire family, all of which are free of charge.For more info: www.jbookfair.com 4. THE RISE OF PASTEL The new exhibition “PANDA” at the Tel Aviv Museum of Art features a body of Israeli art from the 1960s-1970s. The works were made with oil pastels, wax crayons and litho sticks (collectively known as Panda). In the 1960s, sensibility painting seemed to have reached exhaustion. With oil pastels, the pictorial enterprise presented itself anew. Opens Tuesday. For more info: www.tamuseum.org.il 5. DUDES FROM DOWN UNDER Pond, one of Australia’s sterling indie rock bands, is making its Israeli debut. The heralded Perth-based band is an offshoot of Aussie superstars Tame Impala, with interchanging members like Jay Watson and Nick Allbrook and albums produced by Tame frontman Kevin Parker. Pond has taken psychedelic pop to new heights since debuting in 2008. The band will be promoting its new album, The Weather. Tuesday, Barby Club, Tel Aviv. For tickets: www.barby.co.il 6. ANIMAL INSTINCTS French artist, painter, sculptor and performer Olivier de Sagazan is a philosophical artist who takes his inspiration from his native Africa, staging performances of terrifying dances that reflect his preoccupation with the meaning of life. In his existential performative series Transfiguration, de Sagazan slathers layers of clay and paint onto his face and body to transform, disfigure and take apart his own figure, revealing an animalistic human who is seeking to break away from the physical world. Wednesday, 10 p.m. and Thursday, 10:30 p.m., Jerusalem Theatre. For tickets: http://israel-festival.org 7. SOMETHING MEW Mew has proven itself to be one of the biggest and most influential bands on the Danish indie scene, having achieved several gold and platinum albums, as well as winning numerous awards. In addition to its own extensive worldwide headline tours, Mew has toured as special guests with artists such as Nine Inch Nails, Pixies, Muse, and Kings of Leon. The talented trio will perform as part of the Israel Festival. Thursday, 10:15 p.m., Jerusalem Theatre. For tickets: http://israel-festival.org 8. A COUNTESS FROM HUNGARY The Budapest Operetta Theater presents its production of Countess Maritza. The operetta by Jewish Hungarian composer Imre (Emmerich) Kalman tells a tale of love and despair, mistaken identities and little white lies. The libretto, by Julius Brammer and Alfred Grunwald, pairs beautifully with the score of Hungarian melodies. Thursday through June 24, Opera House, Tel Aviv. For more info: www.israel-opera.co.il 9. STARTING A CONVERSATION Jerusalem is gearing up for its first PechaKucha Night, to be held at Beit Alliance. PechaKucha (Japanese for “conversation”) was initiated in Tokyo in 2003 as a way for young designers to meet, network and show their work in public. It has become somewhat of a phenomenon, with events taking place in hundreds of cities around the world.The format is simple: Artists, musicians, filmmakers, designers and other creative people each have six minutes and 40 seconds to present their ideas. Thursday, 8 p.m. to 11 p.m., Beit Alliance, 5 Ki’ah Street, Jerusalem. For more info: www.pechakuchajerusalem.com 10. GYPSY BEATS The New York gypsy punk band Gogol Bordello achieved legendary status in Israel thanks to the group’s electrifying shows in 2009 and 2011.Formed in 1999 and led by the mischievous Eugene Hutz, Gogol Bordello offers a dazzling multi-ethnic musical mix, ranging from Hutz’s Ukrainian roots to the international influences of the other band members.June 16 and 18, Barby Club, Tel Aviv. For tickets: www.barby.co.il