206 Dagim does fish and seafood right. 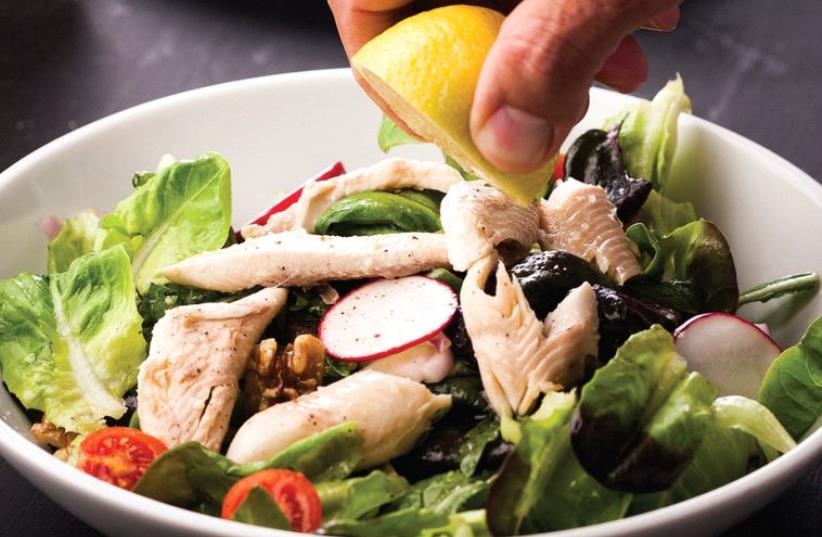 206 Dagim restaurant
(photo credit: PR)
Advertisement
For 20 years, the suburban duo of 206 restaurants – 206 Meat and 206 Fish – has been catering to a loyal following of regular customers. Recently, 206 Dagim (Fish) refreshed its menu – although, frankly, what counts most at a fish restaurant are the freshness of the catch and the chef’s expertise in preparing it.The menu and wine list are bilingual, and the staff speak English quite well. There are no special house cocktails, but the wine list – 100% Israeli – is adequate, with a limited number of wines available by the glass and carafe.Our meal commenced with a basket of fresh, crusty whole grain bread, served with soft butter and accompanied by a relish plate of large green olives and pickles. The bread came in most handy with our first appetizer – the homemade ikra (NIS 38). The 206 version of this white fish roe spread was creamy and delightful – not at all salty, like so many commercial variants – and paired with chopped red onion. There was enough there to share.Our second starter was another house specialty, the smoked trout salad (NIS 54) – sizable chunks of filleted white trout smoked in-house, atop a salad of mixed greens, radishes and walnuts, lightly dressed in a mustard vinaigrette. The smoked trout was as good as can be found in any American deli, while the dish as a whole was large enough to be a main course.There are three categories of main courses: fish, seafood and “specials” comprising both fish and seafood. In the first category, we found a number of fish that are rarely seen in Israeli restaurants, such as Dover sole and red snapper. Unfortunately, they are not available more often than not.If they are, it is mostly on weekends.The first item listed under the specials was a fish we had never heard of, which went by the same name in Hebrew and English: Balutine. We could not resist trying it, especially given the method of preparation: stuffed with mushroom duxelles and served in a red butter sauce with cream (NIS 129).The bland white fish filled with delicate mushrooms was cooked perfectly: flaky and moist in rich two-toned sauce of red wine with butter and cream. It came with 206’s standard side dishes: baby potatoes and cauliflower. Both were roasted, and both were unremarkable.In the seafood category, we took advantage of their short seasonal availability to order the blue crabs (NIS 95). We were all the more convinced by the prospect of enjoying them in a sauce of coconut milk, curry and ginger.Imagine our surprise, therefore, when the crabs arrived in a butter and garlic sauce. The manager apologized for the failure to inform us of the switch and, to his credit, immediately offered a replacement. This time, we heeded the waiter’s recommendation of the shrimp in olive oil, lemon and chili pepper (NIS 105). There was no mistake this time: the plump, juicy shrimp, eaten by hand, were in a zesty sauce that was literally finger-licking good.Our main courses were accompanied nicely by another of our waiter’s recommendations: a glass of the Tulip winery’s White Tulip blend of Gewurztraminer and Sauvignon Blanc (NIS 32).For dessert we had the tarte tatin with a small scoop of vanilla ice cream and a dollop of whipped cream (NIS 42). The apples were round chunks, and the thin pie crust was spot-on, making for a fine ending to a memorable meal.The writer was a guest of the restaurant.206 Dagim Not kosher54 Moshe Sneh Street, Tel Aviv Tel: (03) 648-3030