After building a following with their own show, the digital duo of Eytan Weinstein and Naor Meningher are ready to launch an English podcast with Kan for immigrant listeners.

Eytan Weinstein (left) and Naor Meningher at the Kan studios in Tel Aviv.
(photo credit: Courtesy)
Advertisement
MK Michael Oren. Nobel Prize laureate Dr. Dan Shechtman. Actor Chaim Topol.They are all incredibly respected and accomplished in their respective fields. And they’ve also all hung out in Naor Meningher’s Tel Aviv living room – as guests on the English-language podcast “Two Nice Jewish Boys.”For just over a year now, Meningher and his partner in podcasting, Eytan Weinstein, have been meeting weekly in Meningher’s apartment to record Two Nice Jewish Boys.With their enthusiasm, charm and eclectic guest list, they’ve amassed a small but loyal following.Now the duo are aiming at a bigger audience, and are in the midst of creating and recording a podcast for Kan, the new public broadcaster which went live earlier this year. The new show, titled The Melting Podcast, is set to premiere in the fall. 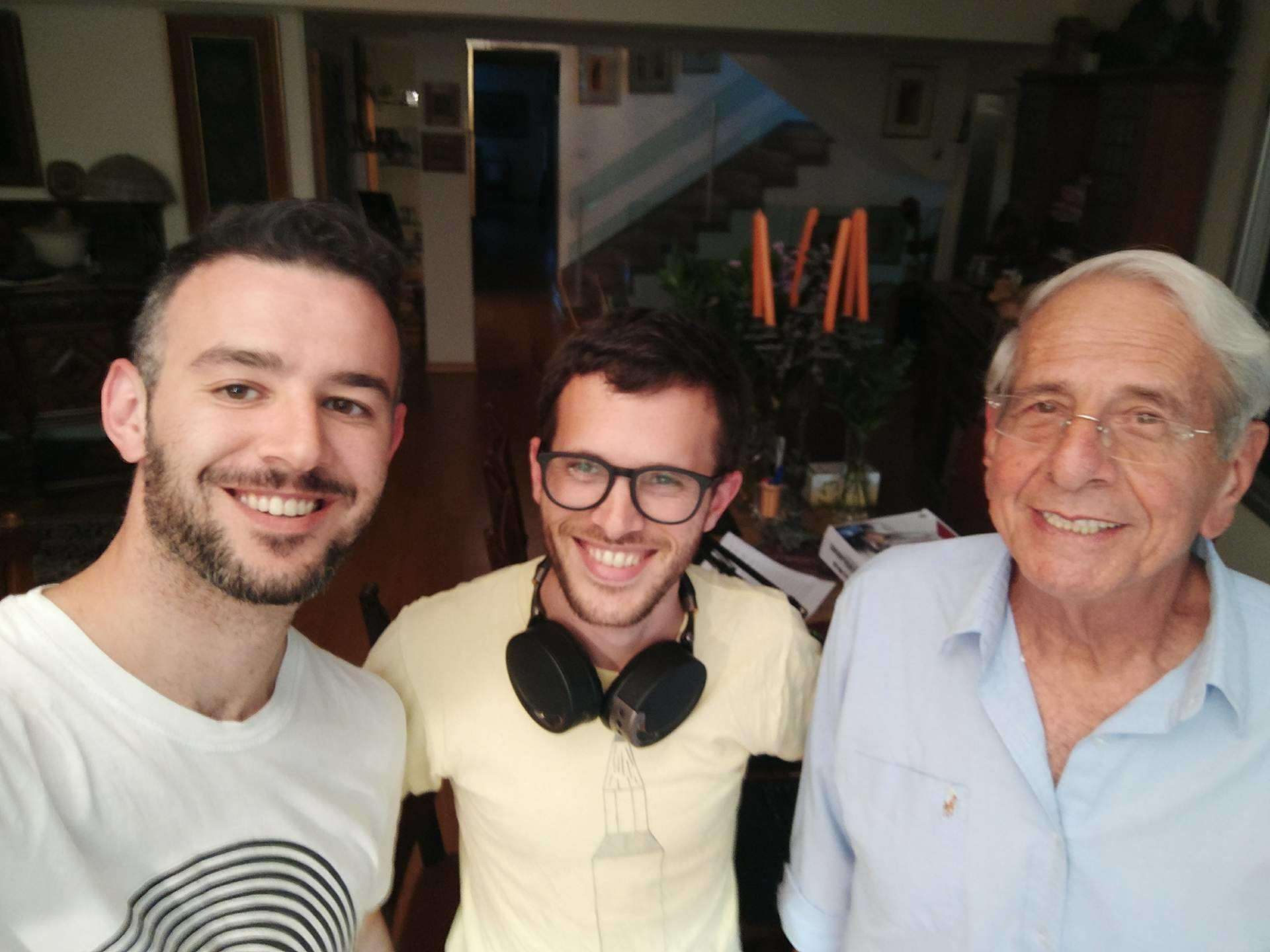 The legendary Chaim Topol, Weinstein and Meningher in the studio. (Credit: Courtesy)
“The idea is to bring content to olim in English, because this is a huge audience that has been neglected by big media channels here in Israel,” said Meningher in an interview last week at Kan’s studio in Tel Aviv. He said while podcasting is far from mainstream in Israel, “Kan wants to lead the digital front here in Israel with journalism. They saw the potential there, and they said we are going to devote ourselves to promote the podcasting culture in Israel.”It’s a world Weinstein and Meningher are already familiar with from their original weekly show, which now has 50 episodes.When they heard Kan was seeking out original podcasters, they pitched themselves and their show to the station. Kan asked them instead to work up a podcast aimed specifically at English-speaking immigrants in Israel. It will combine sketch comedy about life in Israel with interviews with olim and music from native Israelis who record songs in English.The pair of podcasters, both 28, aren’t both immigrants – but they’re both dedicated to reaching this audience.Weinstein made aliya about a decade ago from Birmingham, Alabama, while Meningher grew up in Israel. They met at Tel Aviv University’s film school – which Meningher completed and Weinstein dropped out of.“I’ve seen, as an immigrant, a lot of my close friends who I made aliya with... drop like flies,” said Weinstein. He said there are so many reasons that olim end up returning home, “but I think one of the reasons is there’s a lack of community for olim... they feel isolated and alienated here.” Weinstein feels that creating content in Israel geared specifically to the English-speaking population can “provide that sense of community.”Meningher said he is motivated by Zionism and his love for Israel.“We love living here, we think it’s a rad place to be at, and we love Tel Aviv and we want to convey it and the stories of the people who live here outward,” he said.That was a big part of the reason the duo first launched Two Nice Jewish Boys, which has a more global reach, seeking “to connect the Jewish community abroad to Israel in a very authentic and down to earth manner,” said Meningher.Between the two of them, said Weinstein, they provide “the perspective of the oleh and the perspective of the Israeli.”While Weinstein and Meningher first met in film school, they weren’t particularly close. They reconnected more than a year ago at the party of a mutual friend, started talking and “had an epiphany” – at least, Meningher did. But after a couple months of “wooing,” he managed to convince Weinstein that his dream of starting an English-language podcast in Israel was a good idea. 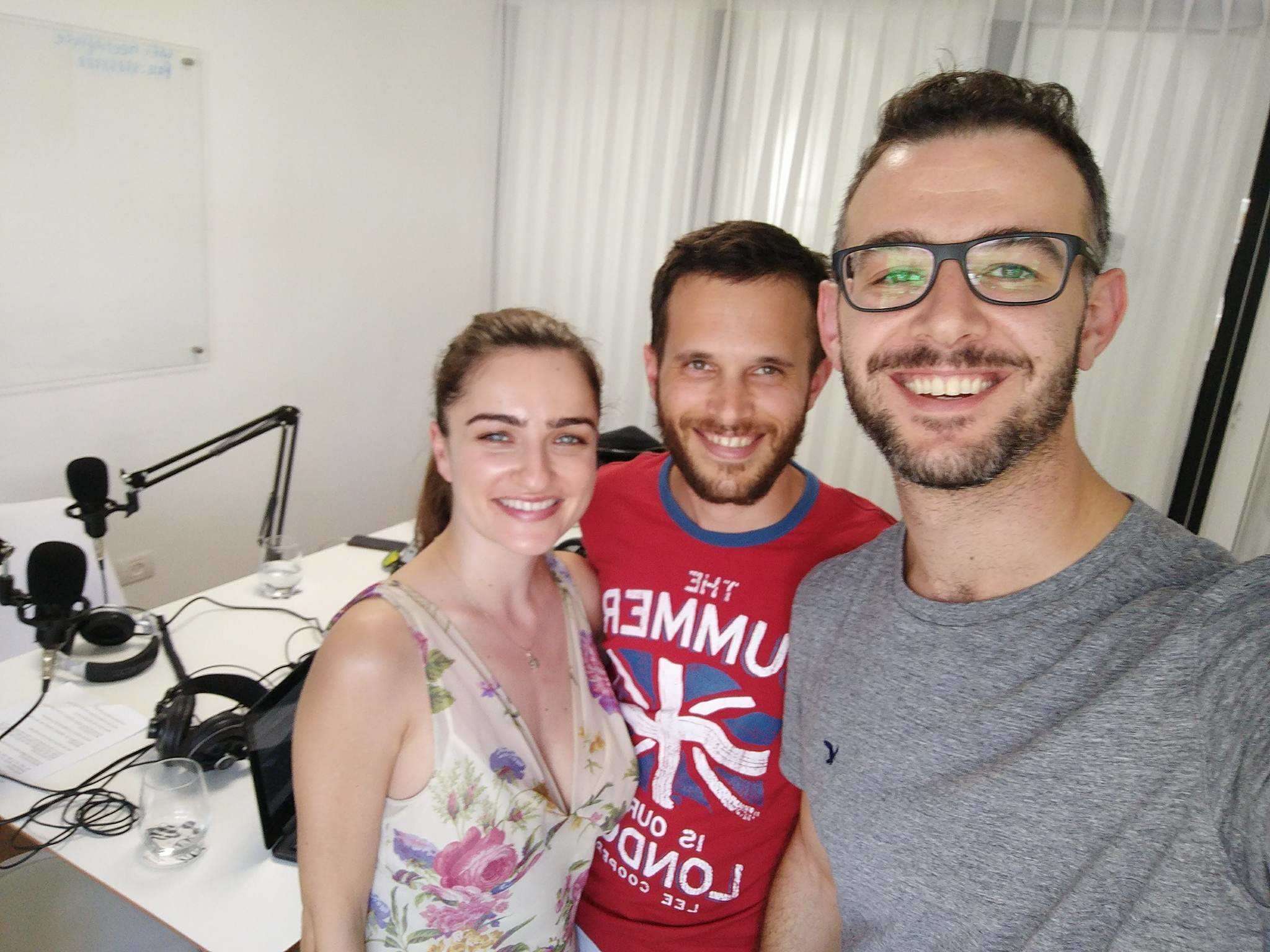 Actress Ania Bukstein in the studio with the Two Nice Jewish Boys guys. (Credit: Courtesy)
The rest, as they say, is history. Now they meet once a week at Meningher’s apartment to record Two Nice Jewish Boys, bringing in guests from historian Deborah Lipstadt to actress Ania Bukstein (of Game of Thrones fame), MK Tamar Zandberg and more. They’ve hosted journalists, writers, activists, comedians and just about anyone with an interesting story to tell.Two Nice Jewish Boys is entirely self-funded: they own all their own equipment and do all the work in their spare time – in addition to their day jobs, and now to the Kan project.Weinstein works as an interactive scriptwriter for a start-up, while Meningher is an independent filmmaker. Even now, with the demands of The Melting Podcast adding to their workload, they have no intention of letting up on Two Nice Jewish Boys – though they’d be more than happy to find a sponsor.“We have a few thousands of downloads” each episode right now, said Meningher, though he said “the potential to us is tens of thousands – and maybe more.”“English-speaking Jews,” said Weinstein – including communities around the globe – “are a huge listenership for podcasts.” The pair are always working on gaining new subscribers via word of mouth, social media, and also the reach of their guests.“Our guests are huge hubs,” said Meningher, noting that when they share the episode with their own followers, their podcast is exposed to a whole new audience.So who are the dream guests for Two Nice Jewish Boys? They’re aiming high: Gal Gadot and Prime Minister Benjamin Netanyahu. Coming soon to a Tel Aviv living room? That remains to be seen.