Featuring all the hits including “Mrs Robinson,” “Bridge Over Troubled Water,” “Homeward Bound,” “Scarborough Fair,” “The Boxer,” “The Sound Of Silence” and many more. 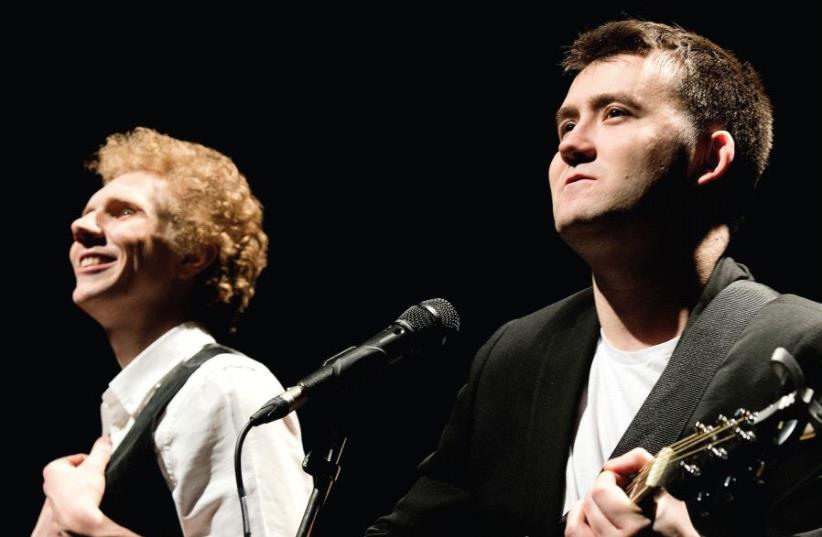 SAM O’HANLON (right) as Paul Simon with Charles Blyth as Art Garfunkel in ‘The Simon and Garfunkel Story'
(photo credit: MORAN PAZ PR)
Advertisement
Direct from its success in London’s West End, The Simon and Garfunkel Story, which comes to various venues throughout Israel from September 13 to 18, tells the fascinating tale of how two young boys – Paul Simon and Art Garfunkel – from Queens, New York went on to become the world’s most successful music duo of all time.The tribute show takes audience through their meteoric highs and lows. From their humble beginnings in 1957 as Tom & Jerry, right through their worldwide successes and bitter break-up, culminating with a stunning recreation of their 1981 Central Park reformation concert attended by an estimated 500,000 people.This current international tribute tour is the brainchild of Sam O’Hanlon, who plays Simon. Backed by a full live band and brass ensemble, O’Hanlon is accompanied by Charles Blyth who provides Garfunkel’s haunting vocals.Featuring all the hits including “Mrs Robinson,” “Bridge Over Troubled Water,” “Homeward Bound,” “Scarborough Fair,” “The Boxer,” “The Sound Of Silence” and many more.Tickets are NIS 204. For more info and tickets: *2207