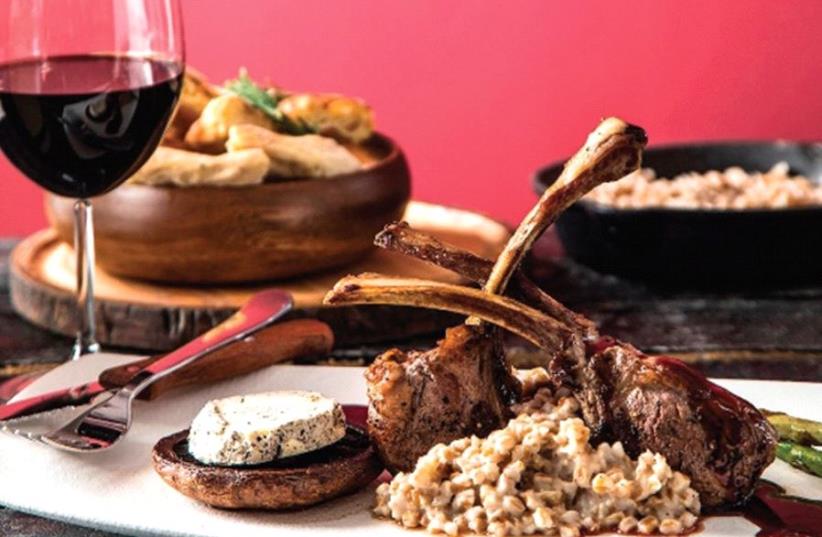 Veneziana restaurant
(photo credit: PR)
Advertisement
The lower city of Haifa has been undergoing serious gentrification in recent years, and a number of fine dining restaurants and nightspots have opened in the area adjacent to the passenger port, between the city’s railway station and financial district. One of the most recent is Veneziana Bar and Trattoria, helmed by chefowner Aaron Namnah, who recently returned to his hometown of Acre after training in Italy and running award-winning Italian restaurants in Stockholm.“I could have retired,” Namnah says, “but I am anxious to expose Israelis to real Italian food rather than what passes for it here.”Namnah has embarked on his mission with what he considers a limited menu, with plans to expand it soon. Still, there is already plenty on the menu to make for an interesting meal.At first glance, the menu looks like it is in English and Hebrew, until one realizes that it is actually the names of dishes in Italian, while all the details are in Hebrew. Even the wines, which are imported from Italy, are mentioned only in Hebrew, not on a wine list (except for four very expensive ones) but rather as recommended pairings with pasta dishes. Fortunately, the names of most of the dishes will be familiar to diners who occasionally patronize Italian restaurants, and the chef and his wife speak English.Veneziana has no specialty cocktails, but there is a full bar, and a bartender who can mix most of the classics. The Italian beer Peroni is available on tap.A meal starts with the house bread, toasted white baguette spread with olive oil and garnished with parsley, along with three homemade dips: a rich pesto, a zesty paprika spread and an excellent black olive tapenade.Our first appetizer was the carpaccio di manzo (NIS 30), thinly sliced filet of beef with rocket leaves and broad ribbons of Parmesan cheese, drizzled with olive oil and dabs of balsamic vinegar. Taken all together, the ingredients added up to a wonderful interplay of flavors.Next were the arancini Siciliane (NIS 25) – two large balls of fried risotto in a marinara sauce. The arancini were perfectly fried, with a crunchy exterior and a moist, flavorful interior, oozing droplets of melted cheese.Our pasta choice was the cannelloni Ripieni (NIS 66), three tubes of pasta stuffed with beef ragout in a bechamel sauce, with smears of pesto. Unusually, the bechamel was enriched with tomato, creating a delectable pink sauce that nicely complemented the hearty and filling baked pasta.Veneziana’s Caesar salad (NIS 50) was a generous portion of lettuce, croutons and Parmesan cheese, with three surprises: large morsels of chicken breast, which was not listed in the Hebrew description, and cherry tomatoes and sliced onion, which are not generally ingredients in a traditional Caesar salad. Nevertheless, the salad was quite tasty, in a dressing that was perked up with a touch of anchovy.Our first main course was the costine d’agnello (NIS 115) – lamb chops in a balsamic-infused sauce of dried figs. The succulent chops – which included the rib meat and fat along with the bones – were very nicely enhanced by the exotic sauce. The side dishes were highly seasoned spelt and grilled al dente vegetables: eggplant, zucchini and red bell pepper.The same vegetables accompanied the gamberoni in padella (NIS 83) – sautéed shrimps in a white wine sauce with cherry tomatoes and mushrooms. The plump, juicy shrimp were delicious – exceedingly fresh and not overpowered by the mild sauce with chunky vegetables, which did much for the plain risotto that came with the seafood.There were three classic Italian desserts, of which we sampled the tiramisu (NIS 35) and the panna cotta (NIS 26). The former was sweet and frothy, with a nice espresso kick, while the latter thick custard was drenched in an overly sweet berry syrup.I confess that I am not familiar with the quality of Italian restaurants in the Galilee, but the authenticity represented by Veneziana would be welcome anywhere in the country.The writer was a guest of the restaurant.Veneziana Not kosher 2 Sha’ar Palmer, Haifa Tel: (04) 999-0184