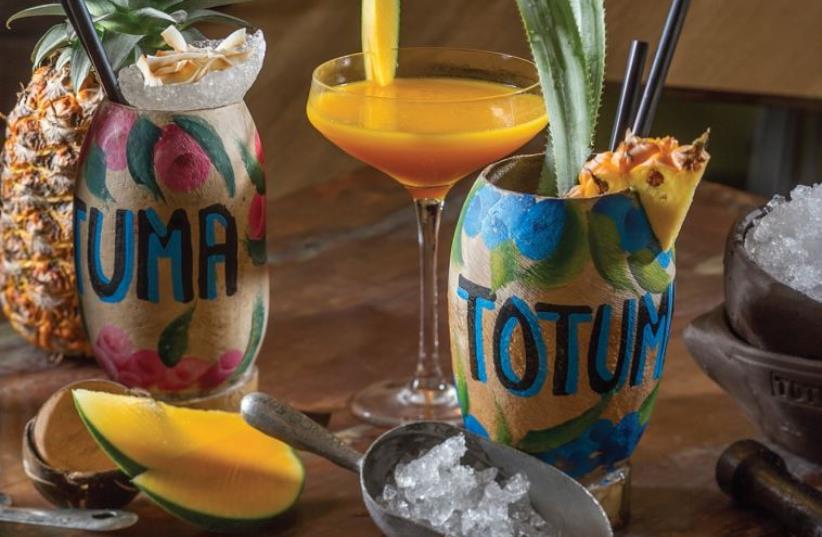 Totuma restaurant
(photo credit: PR)
Advertisement
Totuma has been open for just over a month and has already become a hot spot on Tel Aviv’s Dizengoff Street. Lacking any pretension, this place embodies everything I could ask for in a go-to spot: creative and well-crafted cocktails, a simple yet diverse and well-executed menu (many of the items are gluten-free), friendly service and a chill vibe. I’d never had Venezuelan food before, but after this visit I must say it’s my new favorite.As for the space itself, it’s what you would imagine every night in Latin America looks like: vibrant decorations, a large colorful bar in the center, lively music and an animated wait staff.Totuma’s vibrant owner Dalia Alhadef took some time from her busy kitchen to talk with us. A fulltime mother, Venezuelan-born Alhadef always dreamed of owning her own Venezuelan/Latin restaurant. In 2012, she competed on Israel’s Master Chef, where she introduced viewers to the well-loved arepa, a light and airy pita-shaped flatbread made of ground maize dough filled with cheese, avocado and other fillings.We began our meal with mini parrilla (NIS 48), which consisted of beef entrecote a la plancha with fried tapioca and chimichurri. The beef was amazing. The fat was trimmed off, and the meat was cooked just right so you could taste the moistness and a little bit of a grill flavor. The fried tapioca had a great texture – crunchy on the outside and soft inside.This was followed by tequenos (NIS 32), a Venezuelan spin on mozzarella sticks. I thoroughly enjoyed these little bits of fried dough and cheese. They were delicious and came with a spicy Peruvian pepper sauce and a mango guava sauce.Next up was the tiradito (NIS 46).This was a raw fish dish similar to sashimi but differed from ceviche in the cut of the fish and the lack of onions. The fish was accompanied by lime juice, avocado, palm heart and ahi amarillo sauce. The unique flavors were quite delicious, and the dish was beautifully plated.For the final appetizer, we were served cachapa (corn pancake with shredded white cheese). I wanted to give the pancake a standing ovation for the subtle fresh corn flavor, the caramelized crunchy sweetness on the bottom and the wonderful combination of cheese and fresh sour cream that made this a dish you could eat as an appetizer, a side dish or even dessert.In between, I enjoyed an ice cold glass of Quilmes Argentinean beer, while my dining partner tried the Pura Vida cocktail (NIS 32). She loved the delicious concoction, exclaiming that with each sip she pictured herself lying on a tropical island beach.For mains, we started with the pabellon arepa (NIS 42). It consisted of shredded beef (carne mechada), stuffed in white cornmeal as a bun with black beans, salty white cheese and sweet plantain. The sweetness of the plantain, flavorful seasoning of the shredded beef, saltiness of the cheese and texture of the arepa were a winning combination! It was delicious and filling.This was followed by Los Muchachos arepa (NIS 47), which was chef Dalia’s special beef burger with creamy cheese, tomato, avocado and Totuma’s sauce. All the ingredients together provided an incredible burst of flavors. The gooey cheeses complemented my medium cooked burger, which was very juicy. I can see why this has already become a signature dish.For dessert, we shared the quesillo (NIS 32), which was Venezuelan creme caramel with dulce de leche, cashew and cream. Similar to flan, it was delicious, smooth, creamy and melt-in-your-mouth.If you’re looking for a unique blend of flavors, interesting textures and all-around delicious and satisfying food, look no further than Totuma. It’s always overflowing with people, but the hype is well deserved.

The writer was a guest of the restaurant.Totuma
Not kosher
265 Dizengoff Street, Tel Aviv
Tel: (03) 516-8963
Advertisement
Subscribe for our daily newsletter