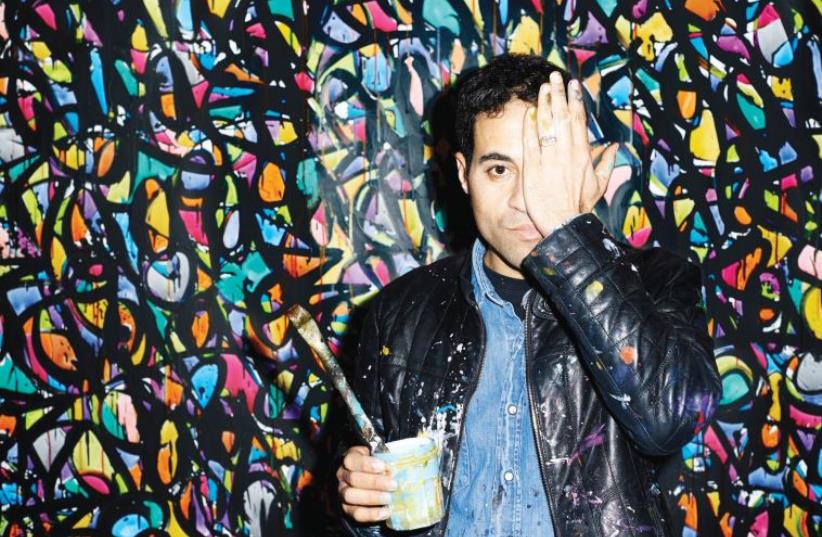 ‘WALKING TO THE SUN’ is American-born, Francebased artist JonOne’s first exhibit in Israel.
(photo credit: Courtesy)
Advertisement
Tuesday night at Gallery 32 in Tel Aviv, if you closed your eyes you could imagine that you were attending an opening in a chic Parisian establishment. The petite, white-walled space was packed to the brim with art lovers jazzed to get a glimpse of American-born, France-based artist JonOne and his larger-than-life, exuberantly colorful pieces. This is JonOne’s first visit to Israel.John Andrew Perello aka JonOne is all the rage these days. It is impossible to resist the magnetic pull of his work, the freedom and joie-de-vivre that fill each canvas. His pieces appear to be the love children of Jackson Pollack’s drip painting and the street art movement. The exhibit, entitled “Walking to the Sun,” reads like a burst of energy, filling the space with bright yellows, pinks and greens. JonOne is a master of color progressions, capable of orchestrating the entire spectrum into organized chaos. The show opened Wednesday night and will be on display until September 24.The artist was born and raised in Harlem by Dominican parents. From a young age, Perello was enthralled by the “running museum” he saw in subway cars. The grip of graffiti took a strong hold on Perello, who began spray-painting his tag, Jon156, all over his neighborhood. In 1987, at the age of 24, Perello picked up and moved to Paris, where graffiti art was taking off monumentally. It was there that he first painted on canvas, was exposed to a community of international artists and sold his first painting.Today, Perello’s work can be seen in the French parliament building. He is a member of the prestigious Legion D’Honneur.A quiet man with a gentle presence and deep, brown eyes, Perello seemed completely at ease at the center of the crowd’s attention. He made small talk with patrons and signed autographs. An hour after the exhibit opened nearly half the pieces were already marked with small red stickers, having sold in a flurry of excitement. (The pieces run from $17,000 to $50,000.) Gallery 32 founder and owner Charles Tibi was overjoyed with the turnout, which consisted of many of his loyal buyers, a bunch of family and friends and walk-ins drawn by the buzz. Tibi, who moved to Tel Aviv two years ago, established Gallery 32 as a means to share his personal love of art with the public.In addition to the exhibits he hosts, Tibi also gives lectures on art marketing and pricing to interested parties. A former licensing businessman, Tibi believes strongly in “changing location, changing fortune.”“The artists I invite are all well-known, foreign contemporary artists,” said Tibi. “Tel Aviv is an incredible spot for art as the city draws tourists from all over the world. In one show here, an artist can reach an audience that would take 15 shows to get to anywhere else.”Hosting JonOne is a big step for Gallery 32.“He is very, very celebrated in France,” smiled Tibi.“I am thrilled to bring him here to Israel, to the local art community and to the country that I love.”

JonOne’s Walking to the Sun is currently on display at Gallery 32. For more information visit www.gallery32tlv.com.
Advertisement
Subscribe for our daily newsletter