What did Axl Rose request in his Tel Aviv hotel room?

The Dan Tel Aviv hotel has made sure that the Guns N' Roses frontman will enjoy his stay in the city. 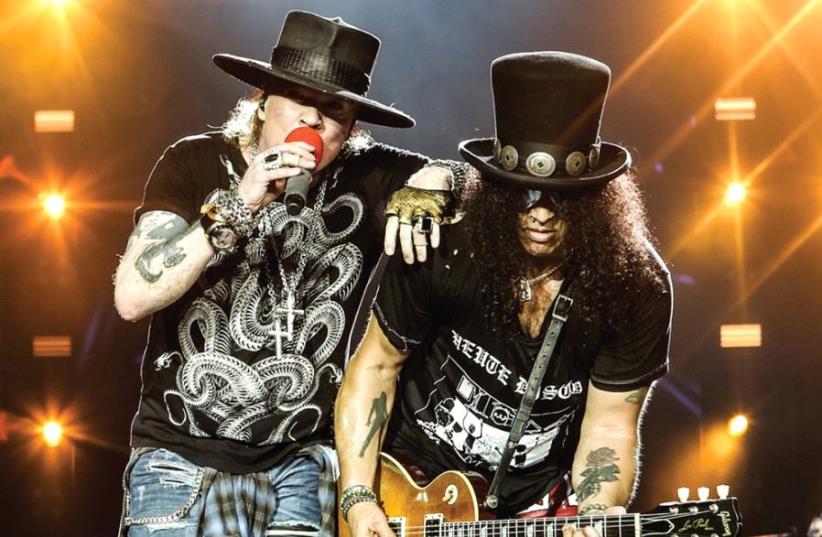 Guns N’ Roses
(photo credit: PR)
Advertisement
Rock legends Guns N' Roses are set to land in Tel Aviv on Thursday ahead of their Saturday night concert.The band – and its 70-person entourage – will be staying in more than 40 suites at the Dan Tel Aviv hotel, which is all set to host the celebrity guests.Axl Rose, the band's eccentric frontman, has made a unique set of demands for his stay in Israel, according to the hotel. They include an exercise bike, a piano and full soundproofing and lightproofing for the room. According to the hotel, Rose stayed in the same suite – the Royal Suite – on his last visit to Israel.That suite at the Dan Tel Aviv has hosted Justin Bieber, Britney Spears and Steve Tyler in just the past two months alone. The hotel may be a hot-spot for celebrity guests, but its bragging could still do with some updates. In a release, the Dan Tel Aviv noted that the Royal Suite, which costs $3,800 a night, comes equipped with a fax machine and a stereo system with a collection of CDs. It's hard to imagine Rose will put either of those features to use.Guns N' Roses will be taking the stage at 8 p.m. Saturday night in Tel Aviv's Yarkon Park. Despite the fact that the concert was moved up from its original start time, angering Shabbat-observant fans, it is expected to be one of the largest concerts Israel has ever seen, with 61,000 tickets already sold.