Clothing chain with history of bad choices pulls item from some sites. 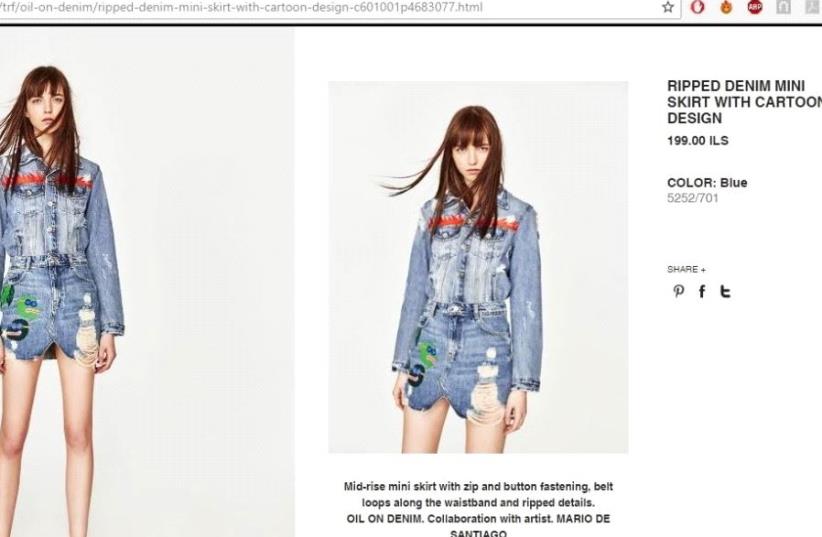 Zara clothing chain under fire for 'Pepe' skirt
(photo credit: screenshot)
Advertisement
International retail chain Zara appears to have pulled a skirt from many of its sites after coming under fire for the cartoon frog painted on the item.Many pointed out that the image on the skirt, released this week as part of Zara’s “oil on denim” line, bears a striking resemblance to “Pepe the Frog.”Pepe, originally created by illustrator Matt Furie, became the preferred symbol of white nationalists during the 2016 US presidential campaign. The image began to circulate alongside racist and antisemitic imagery so much that the Anti-Defamation League listed it as a hate symbol last year, noting that “the use of racist and bigoted versions of Pepe memes seems to be increasing, not decreasing.” The ADL did note that not all usages of the image are antisemitic or racist.After the uproar, the skirt, designed by Spanish artist Mario de Santiago, was pulled from the US, Canada and UK Zara websites. But as of Wednesday afternoon, the skirt was for NIS 199, as well as many other countries including Mexico, Lebanon, India and China.In response to a request for comment from The Jerusalem Post, Zara’s headquarters defended the design, and said it “is only available in selected markets.”The retailer said Santiago drew inspiration from a wall painting he drew four years ago, and that “there is absolutely no link to the suggested theme.” Zara provided a link to a video of Santiago drawing the mural four years ago, which includes a frog, though a more lifelike one.The clothing chain did not respond to further questions on the availability of the skirt in certain markets, and the reason for pulling it from others.This is far from the first time Zara, which is headquartered in Spain, has come under fire.In 2014, it pulled a striped baby shirt, adorned with a yellow star, after customers noted its eerie resemblance to concentration camp uniforms. Zara apologized for the item, and said on Twitter that the shirt was “inspired by the sheriff’s stars from the classic western films.”In 2007, the retail giant withdrew a purse it had been selling after a customer discovered it had been adorned with swastikas amid the floral design. Zara spokeswoman Susan Suette said the store did not realize the design was there: “Had the symbol been seen, we would not have sourced that particular handbag.”