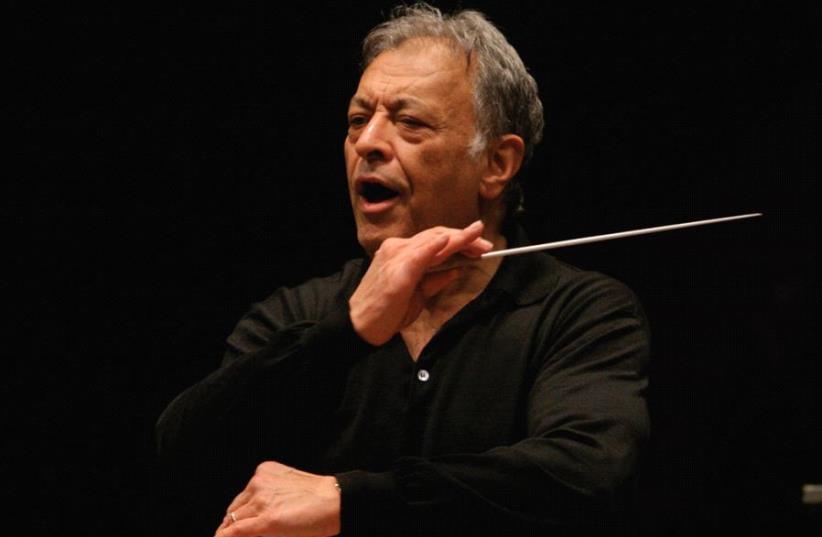 Zubin Mehta
(photo credit: ODED ANTMAN)
Advertisement
Maestro Zubin Mehta is coming to Israel with the excitement that only he can generate. Mehta will lead the IPO in a series of concerts entitled “Summer Gallery,” featuring six artists: Tomer Lev and Daniel Borovitsky, pianists; Tomer Yariv and Dan Moshayev, percussionists; Dudu Carmel, oboist, and Christina Poulitsi, soprano.The series will begin on Wednesday, July 19, 8 p.m. at the Haifa Auditorium; followed by Monday, July 24, 8 p.m., at the ICC in Jerusalem; Thursday, July 27, at 10 p.m., at the Philharmonic in Jeans concert in Tel Aviv at the Charles Bronfman Auditorium; and the finale on Saturday evening, July 29, at 9 p.m. at the Charles Bronfman Auditorium.Four soloists – the two percussionists and two pianists – will perform with Mehta and the IPO the Concerto for Two Pianos and Percussion composed in 1932 by the French composer Francis Jean Marcel Poulenc. The stage will overflow with a full array of drums and percussion instruments, two grand pianos, the IPO and, of course, Zubin Mehta. The music is an interweaving of the voices of the various instruments and demands the precise skills of ensemble playing even more than brilliant technique, which the young soloists certainly possess.The percussionist/timpanist, Dan Moshayev, comes from a renowned family of percussionists and is considered the IPO’s prodigy. Zubin Mehta and the IPO invited him to audition for the IPO when he was 17, and accepted him as their timpanist when he was 18.“I am so pleased with it. It was God’s will,” Moshayev states emphatically. “I was even able to combine a shortened army service with my first months in the IPO.”Moyshayev’s partner in the Poulenc concerto is percussionist Tomer Yariv, who is a member of Percadu, the famous Israeli percussion duo. Tomer and Adi Morag, formed a young, dynamic ensemble that has generated worldwide recognition and acclaim. Their repertoire is eclectic and exciting including some pieces written by the duo members themselves, others arrangements of classical music, plus music written especially for them by today’s top Israeli and international composers.Taking their places at the two grand pianos for the Poulenc Concerto for Two Pianos and Percussion, will be Tomer Lev and Daniel Borovitsky. Tomer was one of the founders of the Buchmann- Mehta School of Music and was its first director (2004 to 2009). He is an internationally acclaimed solo pianist, lecturer and pedagogue.Daniel Borovitsky, a recipient of the prestigious American-Israel Foundation Scholarship, has appeared in numerous concerts for duo piano with Tomer Lev, in addition to embarking on an international solo career that has garnered much critical acclaim.Maestro Mehta’s Summer Gallery concerts will feature solo oboist Dudu Carmel, principal oboist of the IPO, who will perform the well-known and beloved Oboe Concerto in C Major by W. A. Mozart.Zubin Mehta highlights his love of opera in his choice of soprano, Christina Poulitsi, named the best new artist of 2014 by the critics of drama and music in her native country of Greece. She will sing the mad scene from Lucia de Lammermoor by Donizetti and the aria Sempre Libera from Don Giovanni, by Verdi.Zubin Mehta has announced that he will be retiring in 2019 from his position as musical director of the IPO. Nevertheless, he says that the close kinship with the Israeli IPO audiences and musicians will continue.“Conducting the IPO is something I do for my heart.”