The advertisements that were removed from 35 of the Danish capitol's public buses featured two woman beside the quote: “Our conscience is clean! We neither buy products from the Israeli settlements nor invest in the settlement industry.” 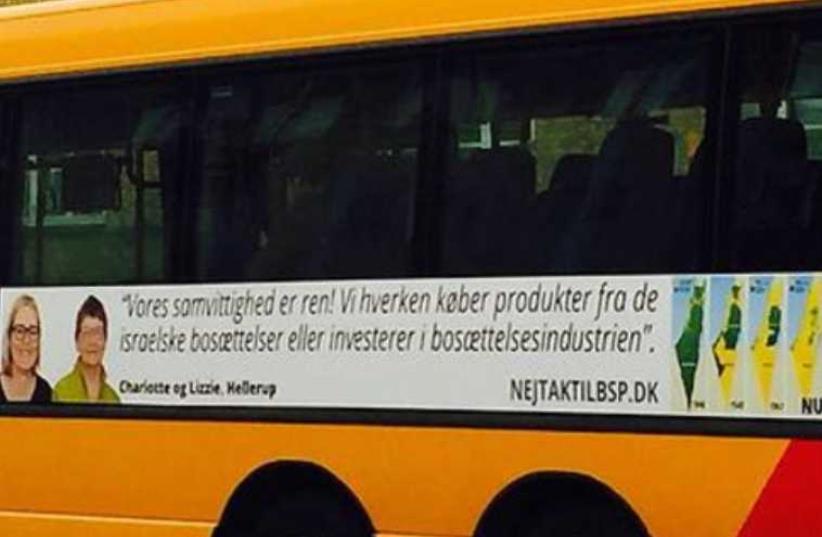 Danish bus ads targeting products from Israeli settlements.
(photo credit: FACEBOOK)
Advertisement
A Danish-Palestinian group promised to expand its campaign targeting products originating in Jewish settlements in the West Bank after its advertisements were dropped from Copenhagen buses, AFP reported Monday. Fathi el-Abed, a spokesman for the Danish Palestinian Friendship Association, said that the move by the country's bus operator, Mavia, was "a clear attempt to deny us our freedom of speech."The advertisements that were removed from 35 of the Danish capitol's public buses featured two woman beside the quote:  “Our conscience is clean! We neither buy products from the Israeli settlements nor invest in the settlement industry.”Movia had removed the advertisements just four days after they stirred controversy. The company said that it had “received a significant number of inquiries regarding the Danish Palestinian Friendship Association’s campaign against Israeli settlements,” adding later that the ads themselves were " “unnecessarily offensive.”El-Abed suggested that “there is nothing whatsoever about this campaign that is harmful, discriminatory or hateful in any way"  and suggested that the decision had only strengthened is group's resolve. “Our support has grown because of all this attention because people are outraged, even those who’ve never had anything to do with the Palestinian cause,” el-Abed said.