Drivers on Route 60 often attempt to pass each other, sometimes leading to deadly crashes. 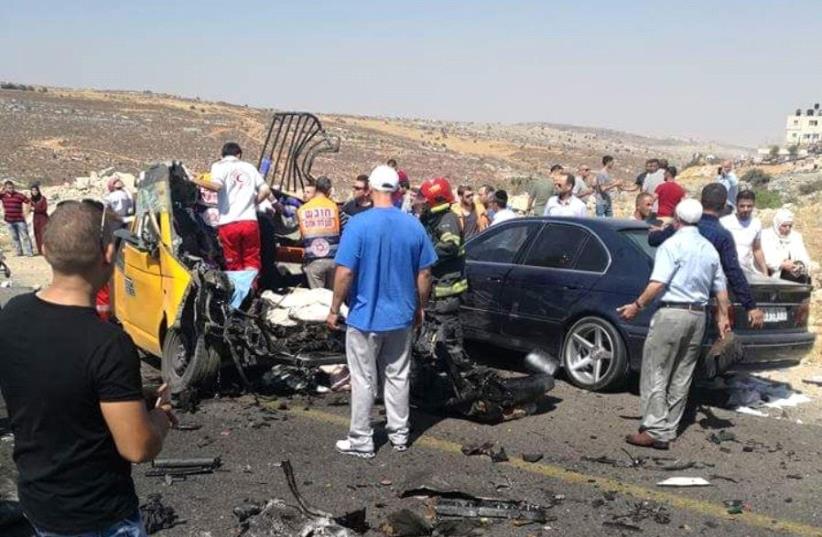 Deadly West Bank road accident leaves six dead
(photo credit: COURTESY MDA)
Advertisement
Six people died and three others were injured Tuesday in a road accident on Route 60, the West Bank’s main thoroughfare.An Israeli bus, a private Palestinian car and a Palestinian shared taxi, or sherut, were involved in the accident, which took place near the Ofra settlement, according to a police spokesman.The spokesman said the shared taxi veered out of its lane for no known reason before colliding head first with an armored Israeli bus. Traffic examiners are investigating the incident, he added.The dead include three Palestinian children – ages seven, eight and 15 – and three Palestinian adults, according to the spokesman. The Palestinian Authority Police said all of the deceased were from Za’atara, a village in the Bethlehem area, but also carried Jerusalem residency cards.The Magen David Adom rescue service said in a statement that the three injured Palestinians, including one man in critical condition, were transported to hospitals in Israel. The rescue service said the man in critical condition was evacuated by helicopter to the Ramban Health Care Campus in Haifa.MDA paramedic Yair Shushaim described the scene of the crash: “We saw a taxi that had been split into two pieces and five passengers trapped inside, the driver outside the vehicle, trapped under a car, and another wounded person lying nearby.” PA President Mahmoud Abbas declared Wednesday a day of mourning, Wafa, the official PA news site, reported.PA Civil Affairs Minister Hussein al-Sheikh and the Coordinator of Government Activities in the Territories Maj.-Gen. Yoav Mordechai on Tuesday agreed to undertake urgent actions to enhance road safety along Route 60, PA Civil Affairs Ministry Spokesman Walid Wahdan said in phone interview.“They agreed that urgent measures will be taken to ensure road safety,” Wahdan stated. “It’s possible that these measures will be implemented in the coming days.”Another deadly accident took place on Route 60 on Friday when three people were killed and five injured in a crash between an Israeli and Palestinian vehicle near the Beit El settlement.