Decades after theft, antiquities returned with note: They brought me nothing but trouble 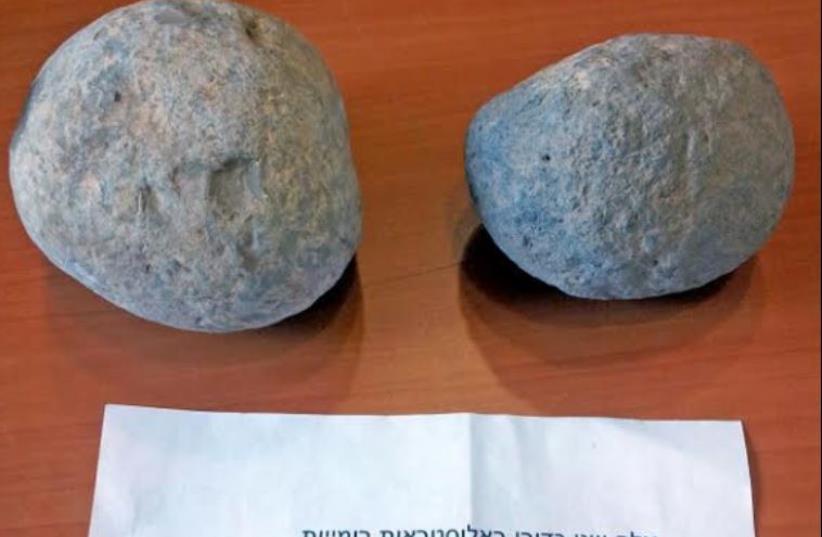 ballista stones from the Early Roman period
(photo credit: DR. DALIA MANOR, MUSEUM OF ISLAMIC AND NEAR EASTER)
Advertisement
Amos Cohen, an employee of the Museum of Islamic and Near Eastern Cultures in Beersheba, did not believe his eyes when he opened a bag left in the museum’s courtyard containing two sling stones and a typed, anonymous note, written in Hebrew.“These are two Roman ballista balls from Gamla, from a residential quarter at the foot of the summit,” the note from last week read. “I stole them in July 1995, and since then they have brought me nothing but trouble. Please, do not steal antiquities!” The museum’s director, Dr. Dalia Manor, rushed to report the returned stones to the Antiquities Authority. The relics are now housed with other ballista balls from Gamla at the National Treasures Department on the Golan Heights.On Monday, Danny Syon, who oversaw numerous excavations at Gamla for the authority for several years, welcomed the return of the stones.“Almost 2,000 such stones were found during the archeological excavations in the Gamla Nature Reserve, and this is the site where there is the largest number of ballista stones from the Early Roman period,” he said, adding that “many other stones such as these are now on display in the Gamla Nature Reserve.”“The Romans shot these stones at the defenders of the city in order to keep them away from the wall, and in that way they could approach the wall and break it with a battering ram,” he explained.“The stones were manually chiseled on site by soldiers or prisoners.”According to Syon, the returned sling stones are not the first case of a thief’s remorse after stealing state antiquities.“In the past, a 2,000-year-old Jewish coffin was returned to the Antiquities Robbery Prevention Unit,” he said.“It had been kept in the bedroom of a Tel Aviv resident until he realized the morbid meaning of the find.”In another case, Syon said that a minister from New York asked for forgiveness for a member of his congregation whose conscience was tormented after he took a stone from Jerusalem more than a decade earlier.The stone was returned to the National Treasures Department, he said.