Defending Israel on the ocean floor 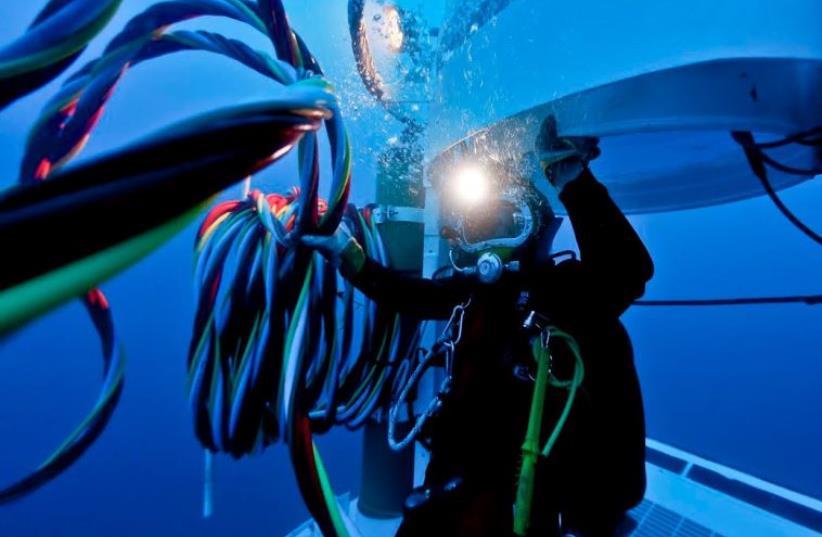 A DIVER FROM the Israel Navy’s Unit for Underwater Missions works with a welding torch in the sea depths
(photo credit: IDF)
Advertisement
Deep under the sea, it was pitch black on the ocean floor off the northern Israeli coastline, and navy divers were working tirelessly to install a secretive sonar station. They were members of the Israel Navy’s Unit for Underwater Missions, an elite naval unit set up in the 1980s.In the depths of the Mediterranean several months ago, they worked in shifts, in an environment that resembled an alien planet. Their gear, designed to enable them to survive in the most hostile conditions, resembled that of astronauts.The sonar device they were installing has since gone on to form a vital link in Israel’s alert system against Hezbollah. Its ability to detect enemy diver intrusions means Hezbollah diver units cannot move into Israeli waters undetected. It is part of the IDF’s preparations for surprise attacks from its most formidable foe.Up above, on the surface, naval operators aboard a ship carefully monitored the divers’ oxygen levels and their helmet-mounted video-camera feeds – every move – using a specialized control console. An “umbilical cord” linked the divers to the ship, delivering an oxygen-helium mix into their helmets and enabling two-way communications. The divers’ suits pumped warm water around their bodies to counter the cooling effect that occurs when humans breath in helium.As the grueling work went on below, stand-by divers were on high alert; any technical fault could become life-threatening. But the mission was completed successfully, and the divers slowly ascended before entering a decompression chamber lowered down into the water. The chamber was pulled up, and they spent the next several hours inside.“They are so experienced that they can focus exclusively on their mission, rather than on diving,” a senior naval source told The Jerusalem Post in recent days. “They can engage in their mission and not think about how to breathe. They covered this in their year-long training.”The unit began as part of the Shayetet 13 commando unit before becoming a separate unit called 707. Soon enough, Shayetet 13 and Unit 707 found themselves in direct competition, and IDF planners decided to put a stop to it, creating the Unit for Underwater Missions and assigning it several vital tasks.One half of the unit consists of professional divers who do such things as installing sonar devices and repairing the engines on the undersides of missile boats. The other half is the underwater version of the police bomb squad; its job is to neutralize mines, rockets, torpedoes, missiles and any other submerged hazard.Half of the unit’s members are women. “We decided that this was possible,” the naval source said.Sometimes, when unit divers need to ensure that the enemy will not see their bubbles, they don suits that recycle their air. Enemies on the surface have no idea Israeli divers are beneath them, hard at work.“We can be anywhere: in the Mediterranean, in the Kinneret or the Red Sea,” said the source. “We have even gone into deep wells in Judea and Samaria to extract submerged weapons.”The naval source outlined the difference between his unit and the more famous Shayetet combat divers. “A commando unit diver is an infantry soldier who knows how to reach his sector through the sea. They are very elite infantrymen who know how to conduct combat at sea. Shayetet 13 has no competitors in the world,” he said.The Unit for Underwater missions, on the other hand, handles every other underwater task necessary for Israel’s security. This could mean placing a sonar station under the waves and diving very deep to do so. Or it could mean emptying a ship of fuel or ammunition. Recovering torpedoes and missiles from naval war games, enabling commanders to assess the effectiveness of practice fire, also forms a core mission.Handling heavy machinery at great depths and locating the bodies of missing air crew all fall under the unit’s mandate. When sunken vessels need to be brought to the surface, the divers will attach underwater parachutes that are filled with gases and rise.On some missions, the divers can descend to the sea floor in underwater elevators suspended from cables.Decompression forms a key aspect of keeping the divers safe, the source said.“High pressure affects the human body. If you go up too fast, this could result in blockages to the blood vessels. Hence, we must rise slowly,” according to the source.“It can take four to five hours to rise 100 m. To shorten the process, we get them up quickly and place them in a decompression chamber just below the surface. This technique is considered a little primitive compared to new solutions becoming available,” the source said.These same divers can neutralize underwater mines – the type Hezbollah might try to plant around offshore gas drilling rigs in the future.“They can descend to a depth of 90 m. using the elevators,” said the source. “They then deploy a robot with its own sonar sensor, which detects targets. Considering that they can only see 4-5 m. around them, this is very helpful in an environment with near-zero visibility.”When it is not carrying out such tasks, the unit does what the rest of the IDF does.“We prepare for war,” the source explained. “Part of this means integrating with Flotilla 7 [the navy’s submarine fleet] and Flotilla 3 [the missile ship fleet].”The unit even strays into the police world, where it is called in for assistance. Criminals who suspect that they are about to face a police raid tend to hurl their firearms into the Mediterranean, the source said. The unit’s members come to extract the weapons.“We can be stationed in multiple navy bases,” he added. “We change our location in accordance with developments.”