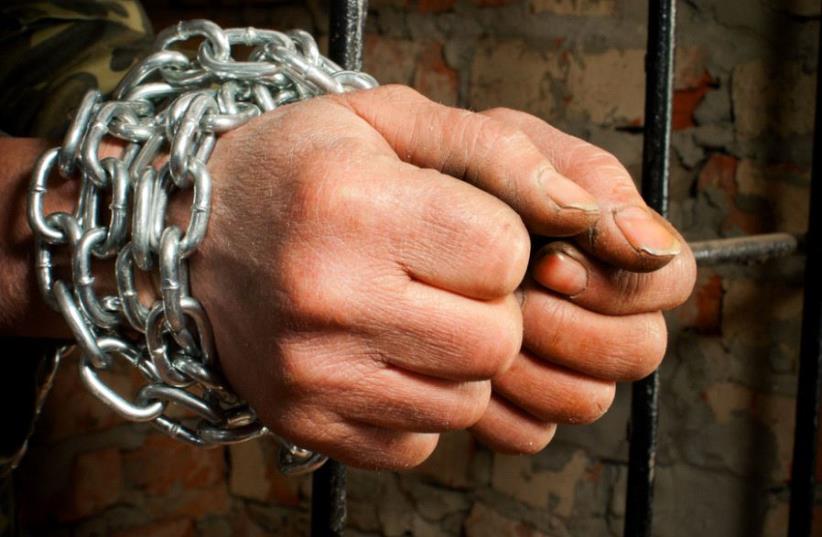 Man with hands tied up with chains behind the bars (illustrative)
(photo credit: INGIMAGE)
Advertisement
The state may for the first time seriously consider appointing a special defender in administrative detention cases, Deputy Attorney-General Raz Nizri told the Knesset Constitution, Law and Justice Committee on Tuesday.Nizri said, “After 30 years we need to rethink how we operate” in regard to administrative detention. “Regarding a special defender, I thought there was room to think about this suggestion and we held a number of consultations.”Administrative detention is a controversial judicial proceeding in which – in place of a full trial – only prosecutors and judges see the full classified evidence against a detainee and the standard of evidence for keeping a person detained is lower.A special defender, a position that exists in some Western countries like England, would have special clearance to view all classified information which regular defense lawyers cannot, thereby improving detainees’ chance at a legal defense.The deputy attorney-general made the comment as part of an ongoing debate over efforts to normalize administrative detention within the Green Line.The idea is to apply it without resort to the Emergency Regulations which have served as its basis since the founding of the state.However, as part of the price for regularizing administrative detention, many Knesset members have demanded new protections that detainees have not had as long as the practice was – at least technically – a temporary and emergency measure only.Some human-rights lawyers from the Left have for years demanded abolishing the practice, or at least adding a special defender. Those demands have fallen on deaf ears.In recent years, administrative detention has also been used on activists on the Right, creating an odd and new alliance in which Knesset MKs like Bezalel Smotrich (Bayit Yehudi) have joined their left-wing counterparts in demanding better protections.Nizri did not signal that the suggestion would be easily approved. He did say, however, “There is great opposition from various officials within the government,” presumably referring to the security establishment.The Knesset committee’s legal counsel, Smotrich and lawyers on the Left also raised the prospect of having a court – as opposed to the defense minister and the Shin Bet (Israel Security Agency) – sign off from the start on administrative detentions or after 24 hours.Currently, the defense minister and the Shin Bet are the main force for administrative detentions within the Green Line, with the courts needing to extend their detention orders after 48 hours or more, depending on circumstances.Smotrich and the Knesset committee lawyer also mentioned difficulties of how changes in administrative detention within the Green Line might impact the rights of Jews and Palestinians in the West Bank.