‘People should realize they want to be part of their communities.’ 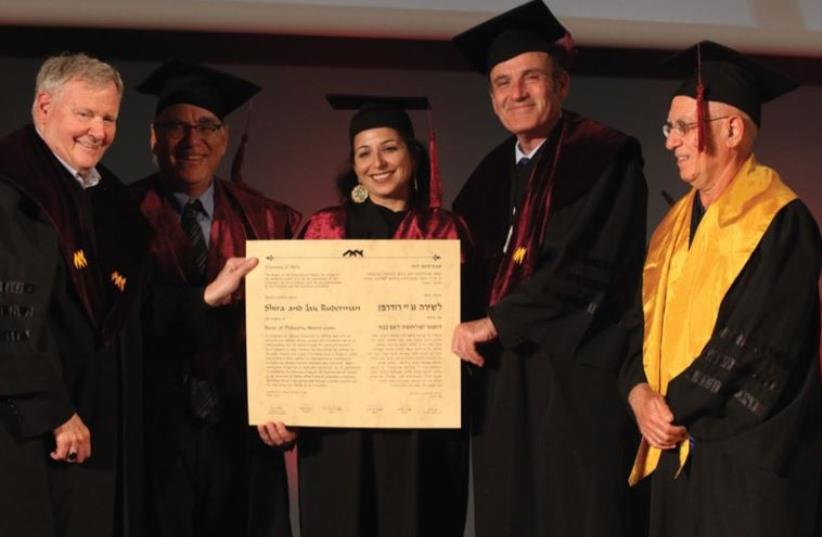 SHIRA RUDERMAN (center) is awarded an honorary doctorate at the University of Haifa.
(photo credit: GIL HADANI)
Advertisement
Israel lags behind the US in terms of services for and stigma against the disabled, Shira Ruderman, the Israel Director for the Ruderman Family Foundation, told The Jerusalem Post.The US- and Israel-based organization promotes inclusion for people with disabilities and works to strengthen ties between Jewish Americans and Israelis.Ruderman spoke last week about her work at the foundation to create a more inclusive environment for people with disabilities in Israel.It started when the organization began working on a project dealing with making Jewish education in the US “excellent.”“We didn’t understand how you can make Jewish education excellent if it does not include everyone,” she said.To Ruderman, it was a matter of fairness, ensuring that the Jewish day school system became inclusive for everyone, and this approach gradually grew to include all aspects of Jewish communal life, from synagogue, to summer camps, to federations.Ruderman stresses that the organization strives for inclusiveness for people with all types of disabilities.“It’s not easy and it’s not cheap,” she said of the changes that need to be made to US Jewish community infrastructure and mindset, but “if it’s important to you, you’ll make it part of everything you do.”Part of her work with the foundation is to convince organizations to create programs that allow for inclusion of people with disabilities. This includes making sure activities are accessible. One way she tries to bring the issue into consensus is showing the large impact the changes can have on other community members – such as the elderly and young families with children, who often benefit from the infrastructure needed to include people with disabilities.Ruderman points out that most people with disabilities were not born with them, and she encourages people to realize that those with disabilities want to be part of their communities.It is difficult to compare the situations in the US and Israel, Ruderman said. In the US, where great strides have been made over the years to include people with disabilities, the infrastructure is largely available and many services are provided by the government.The focus there is on Jewish community activities and ensuring that inclusion goes beyond state-funded necessities and extends into Jewish day schools, and extracurricular and synagogue activities.In Israel, Jewish community life and the services provided are often intertwined, such as with marriage services. Moreover, while “a tremendous amount of progress has been made,” Ruderman said that Israel’s services lag behind the US and there is a large problem with the stigma attached to disabilities here.Just last month, the foundation spoke about against MK Avigdor Liberman, who had used the word “autistic” as an insult. He subsequently apologized.“When you refer to someone as ‘autistic,’ it’s about who he is and his abilities and we, culturally, view their abilities as very limited and we look down on them,” Ruderman said.That is what the foundation is trying to change, by raising awareness in every area of life in Israel. “We are in the business of changing awareness and changing attitudes, and part of changing attitudes and awareness is using the right words. Our words build a mindset,” she explained.An example of the work the foundation does is the Inclusion Conference, hosted at the “Na Lagaat” (Please touch) center at Jaffa Port on June 1. The conference brought together more than 100 CEOs, board chairmen and philanthropists, all in an effort to raise awareness of the need for inclusion of people with disabilities in all areas of life in the country.Ruderman, who spoke at the event, said there: “This conference answers a great need in moving both the field and actual inclusion forward. Moving the field forward will happen when everyone sees the necessity in working together – third sector, business and the public sector. Moving actual inclusion forward will happen when the joint goal of raising awareness happens.”The TedX-style talks at the conference showcased the need for more inclusion across the board. MK Shai Piron, former education minister, discussed inclusion in the classroom, while others spoke about independent living for people with disabilities, their underemployment, the barriers of entry into the workforce, and more.The Ruderman Family Foundation has another primary goal, to better understand and further the connection between the Jewish-American community and Israel.The foundation supports journalist delegations and MK delegations to the US, and an offshoot of that is the Knesset Caucus on Israel-US Relations, which was established in 2011 by then MK Ronit Tirosh, who took part in the Ruderman Knesset Fellows program.The foundation conducted surveys over the years and found that Israelis held many misconceptions about the American-Jewish community, such as assuming that all American Jews are interested in Israeli politics and that domestic Israeli politics do not affect American Jews, said Ruderman.“The other thing we found was that they know that there are many different types of Jewish people in terms of how they identify themselves,” but at the same time “they don’t understand the difference,” she explained.Ruderman, along with her husband, Jay Ruderman, were awarded honorary doctorates by the University of Haifa in recognition for their work on both inclusion of people with disabilities and strengthening the relations between American Jews and Israel.