Sunrise at the Western Wall by Zina Roitman
(photo credit: JWG LTD)
Advertisement
Let’s celebrate with some beautiful artwork, featuring Jerusalem’s unique and iconic people, places, and things. There are 50 artworks mentioned here – one to celebrate each year that Jerusalem’s been a part of modern Israel! Happy Jerusalem Day! Ben Avram A Jerusalemite and painter, Ben Avram returns to his hometown for inspiration. His paining “Gate of Jerusalem” is a fan favorite. Avram’s spirited paintings portray the harmony between man and nature. The bright colors hint at the Early Modernist movement embraced by Chagall and other painters addressing biblical themes.
Gate of Jerusalem by Ben Avram. Photo Credit: JWG LTD
Arie Azene Arie Azene, a watercolor master, recreates realistic yet ethereal scenes in Jerusalem. Azene’s watercolor beauties include several studies of Jerusalem’s seminal doors (blue, green, and white, and brown versions). His realistic fruits in Jerusalem series includes “Pomegranate in Jerusalem” and “Fig in Jerualem,” capturing the rich lusciousness of the fruit with the classic beauty of Jerusalem.  Born in Jerusalem, Castel lived and trained in Paris for 13 years before returning to Israel, settling in the Tsfat. His style has two main branches – the vibrantly colored gilded paintings with biblical themes defines one. The other style is a softer with muted tones and shows the buildings of Jerusalem and family scenes. His Jerusalem-themed paintings include “Kings of Jerusalem,” “Shofar Above the Lion’s Gate,” “Village Around Jerusalem, “Glory to Jerusalem,” “Prayer at the Wall,” “Wedding in Jerusalem,” and more.
Kings of Jerusalem by Moshe Castel. Photo Credit: JWG LTD
An immigrant to Israel from Romania in 1905, Gutman’s modern aesthetic has a clear point of view in all his works. And while he’s best-known for his works on Tel Aviv, Gutman loved all of Israel. His work “Jerusalem” remains one of his bestselling lithographs. For even Gutman from his Tel Aviv studio couldn’t resist the draw of Jerusalem.
Jerusalem Signed & Numbered Limited Edition Lithograph by Nahum Gutman. Photo Credit: JWG LTD
Gregory Kohelet Modernist Gregory Kohelet was born in Uzebekestan, but found much of his inspiration in the hills and bends of Jerusalem. His unique take on landscapes of Jerusalem, biblical themes, and daily life has a cubist slant. Featuring bits of cubism, hints of expressionism, he has dozens of Jerusalem paintings, including “Jerusalem,” “Noah’s Art,” “Tomer,” “Sunset in Jerusalem” where Jerusalem is in the center. In other paintings, like “Motherhood” and “Tightrope Walkers,” touches of the Jerusalem skyline appear, festooning the characters.
Rainbow Over Jerusalem by Gregory Kohelet. Photo Credit: JWG LTD
Baruch Nachshon Influenced by his teacher, Paul Cezanne, combined with his own artistic view, Baruch Nachshon’s trademark style is unmistakable. His surrealist landscapes and sneaks of unusual colors and patterns make Nachshon a favorite among all who appreciate Israeli art. His paintings of Hebron and the City of the Patriarch have earned him exceptional acclaim as a religious painter. 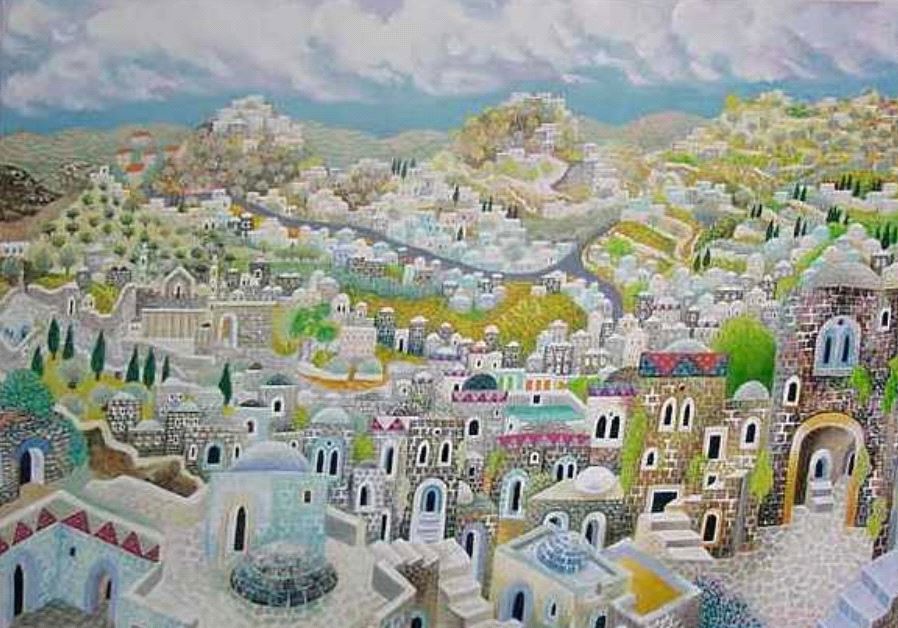 Jerusalem by Baruch Nachshon. Photo Credit: JWG LTD
Zina Roitman Born in the Former Soviet Union, Zina Roitman made Aliyah in 1974. Her works take a few distinguishing themes. First, is that of Jerusalem. Her love of Jerusalem is hard to deny when you see her paintings. Roitman’s Jeruslaem paintings include landscapes and studies of historical places, such as “Jerusalem,” “Prayers at the Wall,” and “Tryptych Panorama of Jerusalem” take typical topics and add a warmth and light. Her studies of the Montefiore Windmill as Yemin Moshe in different seasons is a lovely way to see Jerusalem all year long. Second, are her bold and flowery paintings, notably radiant and bright compared to her Jerusalem paintings.
Sunrise at the Western Wall by Zina Roitman. Photo Credit: JWG LTD
Calman Shemi Calman Shemi is a painter who sees Jerusalem like another world. His two major series are that of Jerusalem, and another of the planets. The bright colors, bold lines and unique atmosphere of Shemi’s Jerusalem are unmistakable and evoke otherworldly atmosphere that the viewer immediately understands when viewing both collections together. Shemi, an immigrant to Israel and Kibbutz member, shows immense reverence to this Holy City in his gorgeous paintings.
Jerusalem of Peace by Calman Shemi. Photo Credit: JWG LTD
Victor Shrem Victor Shrem, a trained ceramicist, started painting after a few years working with ceramic and sculpture. His bold colors and religious themes make for an easily distinguishable style. And of course, Shrem found that it’s impossible to skip over Jerusalem. His works “Star of Jerusalem” and “Jerusalem” are a favorite way to get reminded to “remember Jerusalem.”   Marc Chagall is a seminal French painter, who happens to be Jewish, however he’s never lived in Israel. But he’s still connected! Chagall’s famous bible illustrations were painted in Israel. In fact, Israel was also one of his most vibrant inspirations. “In the East I found the Bible and part of my own being,” said Chagall. But what about his paintings? When it comes to Jerusalem, it’s the “Jerusalem Windows” that has the most acclaim. Twelve windows, each representing the twelve tribes, stands eight feet wide! Said Chagall, “I did not see the Bible, I dreamed it. Ever since early childhood, I have been captivated by the Bible. It has always seemed to me and still seems today the greatest source of poetry of all time.” Jerusalem’s Majesty Jerusalem has been around for centuries, so it’s no surprise that she’s often the topic for painters drawn to her mysteriousness, her history, and her unparalleled grace & beauty. In the past 50 years, Jerusalem has grown a skyline with skyscrapers, built monumental bridges, and grows every day. What glorious skyline will inspire the painters of the future? Only time will tell. Happy 50th, Jerusalem!