The statistics indicate a general trend of a small, but steady increase in divorce rates since 2012. 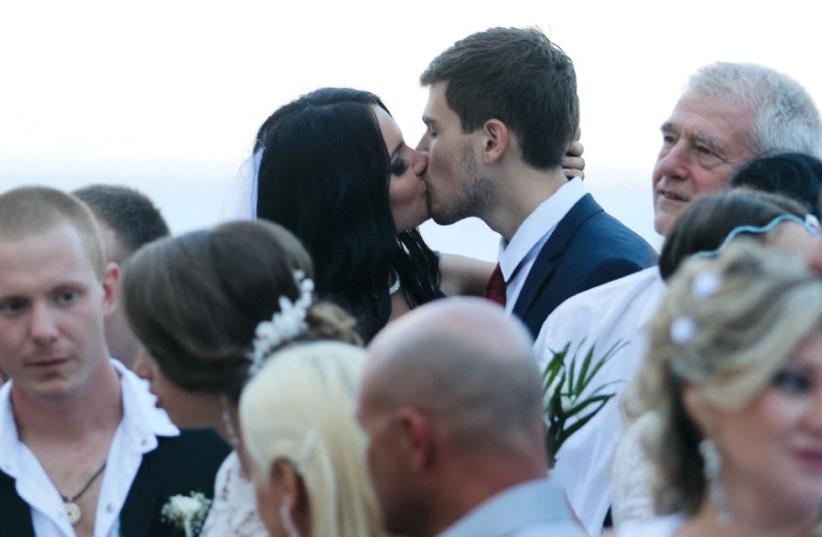 Wedding
(photo credit: ILLUSTRATIVE PHOTO: REUTERS)
Advertisement
The country saw a small rise in the number of Jewish couples filing for divorce in 2016 over the previous year, while Jerusalem, Israel’s most populous city, maintained its status as the nation’s divorce capital with 725 marriages terminated.The figures released by the Rabbinical Courts Administration on Monday, showed a 1.8% rise in the number of couples divorcing in 2016, with a total of 10,841 couples ending their marriages that year compared to 10,653 in 2015.Another 5,308 divorce suits were filed in 2016, along with 9,811 filing divorce by consent applications.The statistics indicate a general trend of a small, but steady increase in divorce rates since 2012, when there were 10,283 divorces.The 2016 figure of 10,841 divorces represents a 5.5% increase over the 2012 figure.The Rabbinical Courts Administration’s special department for freeing agunot – “chained women” whose husbands refuse to grant them a divorce – obtained a religious bill of divorce for 211 women whose husbands generally either hid in Israel or fled abroad, compared with 180 last year, an increase of 17%.The rabbinical courts issued 205 rulings imposing punitive sanctions on 47 recalcitrant spouses, 36 of whom were men and 11 of whom were women.For a Jewish divorce to be valid, the husband must willingly grant a get, or bill of divorce, and the wife willingly accept it. If either side refuses to do, the rabbinical courts are entitled to impose sanctions, such as banning the recalcitrant parties from leaving the country, revoking their driving licenses, freezing their bank accounts or even imprisonment in severe cases.Rabbinical Courts director Rabbi Shimon Yaakobi said the courts were becoming more efficient and would continue to improve.“In the coming year, we will work to upgrade the rabbinical court’s computer system and enable those filing for divorce – as well as lawyers and rabbinical courts advocates – to use electronic forms of communication, so that they will not need to physically come to the offices of rabbinical courts,” he said. “Similarly, we will work to carry out rabbinical court rulings as efficiently and quickly as possible.”