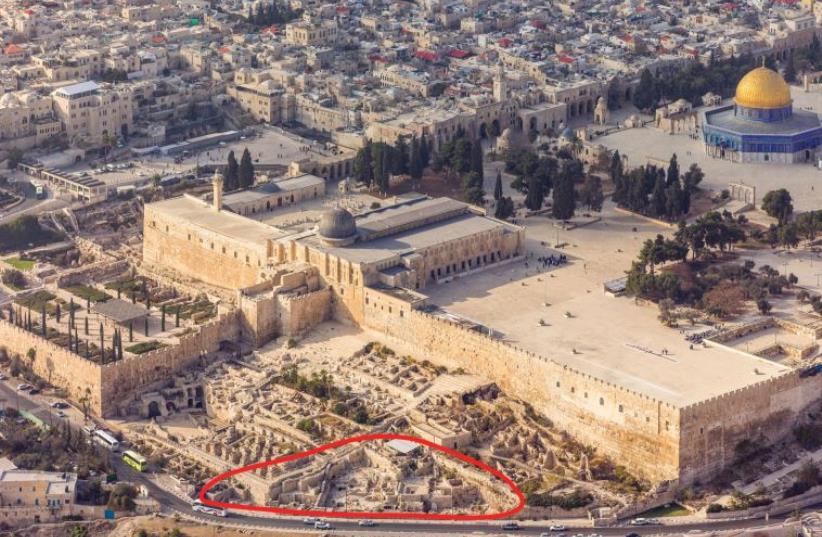 An aerial view of the excavation site overseen by the Hebrew University of Jerusalem’s Institute of Archaeology
(photo credit: COURTESY OF ANDREW SHIVA)
Advertisement
Archeologist are scientifically proving the Jewish people’s connection to Jerusalem, defending the State of Israel in a way that no one but the IDF can, Foreign Ministry director-general Dore Gold said Thursday night. Opening the City of David’s 17th Annual Archeological Conference, Gold addressed “the international attempt to disengage Jerusalem from Jewish history.”Gold specifically focused on a UNESCO resolution adopted in April, which ignored Judaism’s ties to its holiest site, the Temple Mount. Judaism, Christianity and Islam all consider the Temple Mount to be a holy site, but the UNESCO resolution referred to the area solely as al-Aksa Mosque/ al-Haram al- Sharif, except for two references to the Western Wall plaza that were put in parentheses.The text also referred to the plaza as al-Buraq Plaza, named for the Prophet Muhammad’s horse, which sparked an outroar at what Jerusalem slammed as an attempt by the UN to rewrite history.Gold charged that UNESCO fails to live up to its acronym, which stands for the United Nations Educational, Scientific and Cultural Organization, accusing it instead of promoting the distortion of history.He said Israel must understand why this is happening, and what it can do about it.He suggested that political fire against Jerusalem is such a central part of the Palestinians’ propaganda campaign, because they are precisely aware of the strong historical connection of the Jewish people to the land.“One cannot ignore the original document of the British Mandate, which is binding in the eyes of international law. In that document...recognition has been given to the historical connection of the Jewish people with Palestine... Therefore it is so important for those who want to throw mud at us, and delegitimize us, to try to disconnect this historical connection,” he concluded.Gold also referred to British documentation of a Jewish majority in Jerusalem in 1863, and cited US jurist Stephen Schwebel’s finding after the Six Day War that Israel had “better title” in Jerusalem than other claimants.He concluded that, in the face of the accumulated evidence of the affinity of Jewish people to Jerusalem, “anyone who wants to make life more difficult for Israel in the international arena, who wishes to negate our rights, to promote an agenda of delegitimization, must direct all their efforts on Jerusalem.”The conference was held just two days after archeologists announced that they had reconstructed floor tiles from Jerusalem’s Second Temple courtyard. “Our affinity to Jerusalem is a certain historical truth – not just a narrative,” Gold stressed.Gold lauded the work of the archeologists and said Israel must continue to present its truth to the world. “Tonight we do this, and we will continue to do this next year,” he asserted, pointing out that 2017 will mark 100 years since the Balfour Declaration.Tovah Lazaroff and Daniel K. Eisenbud contributed to this report.