Druse and Circassian municipalities threaten to close schools over funding

This strike comes as Bennett’s Bayit Yehudi party is attempting to sign up thousands of new members from the Druse community in a membership drive that began on Monday. 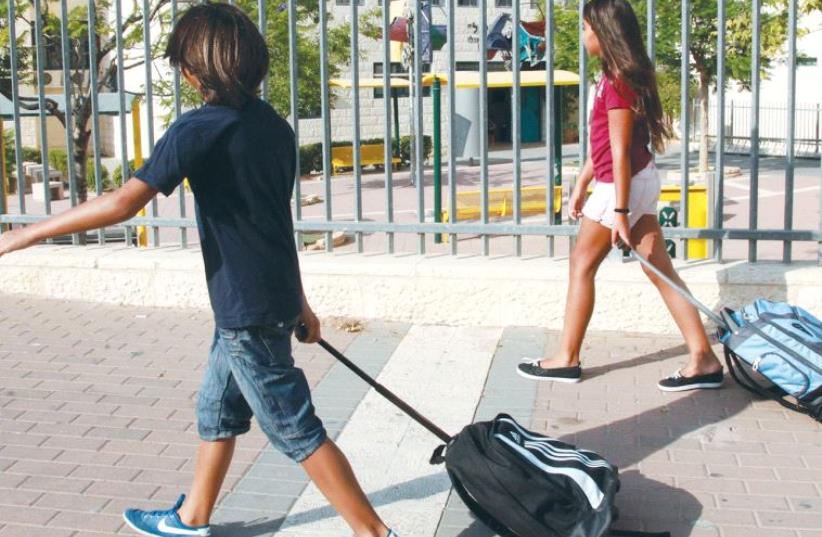 Children walking to school
(photo credit: MARC ISRAEL SELLEM/THE JERUSALEM POST)
Advertisement
Mayors of Druse and Circassian communities unanimously decided to postpone the opening of the school year if the budget allotted under the government’s five-year development plan is not received. Druse authorities are also threatening to disband their local councils.In a letter sent to Prime Minister Benjamin Netanyahu, the Druse and Circassian Local Council Heads Forum threatened to keep schools closed this fall if they do not receive the 2015-2016 budget from the five-year development plan for their communities. The letter was also sent to Finance Minister Moshe Kahlon, Interior Minister Arye Deri, Education Minister Naftali Bennett, and Construction Minister Yoav Galant.In the letter, Usfiya Mayor Wajeh Kayouf, chairman of the Druse and Circassian Local Council Forum, calls upon all government ministries, especially the Education Ministry, to complete the transfer of money by September 31, before the start of the school year.“We hope we are not forced to avoid the joy of our children and their parents on October 1,” the letter states. For most pupils in the Jewish state sector, school opens on September 1.In June 2015, the cabinet approved the fiveyear Druse and Circassian development plan proposed by Netanyahu and Kahlon. The NIS 2 billion, five-year (2015-2019) plan seeks to strengthen Israel’s Druse and Circassian communities, representing around 140,000 citizens.The largest portion of the budget – NIS 350 million – was allocated to expanding formal and informal education.A spokesman for the Education Ministry told The Jerusalem Post it has not transferred the money to the communities.“The Education Ministry is working on the subject with the Finance Ministry. Unfortunately, the budget has not been transferred for various five-year plans for 2016, including the five-year plan for the Druse,” the spokesman stated. “We hope the Druse and Circassian Local Council Heads Forum will reverse their decision and will remove the threat of a strike.”The forum’s letter went on to state that the communities are striking as a last resort.“These areas are in desperate need of development funds that remain missing,” the letter said. “These are not measures [the strikes] decided on easily,” however, “we are convinced that this is a just struggle which will help ensure the future of our residents, their security, their education and welfare.”Along with payment in full of budget allocations, the Druse and Circassian authorities are demanding a full implementation of the 2017- 2018 development budget, discounts for IDF veterans to purchase land in the communities, and grants for the communities of Kafr Kana, Peki’in and Usfiya.This strike comes as Bennett’s Bayit Yehudi party is attempting to sign up thousands of new members from the Druse community in a membership drive that began on Monday.