Education Ministry reverses itself over veto of Arabic dictionaries

MK Yousef Jabareen and Sikkuy said the problem is far from solved because redress must still be found for all the students who took the exam without dictionaries in May and earlier. 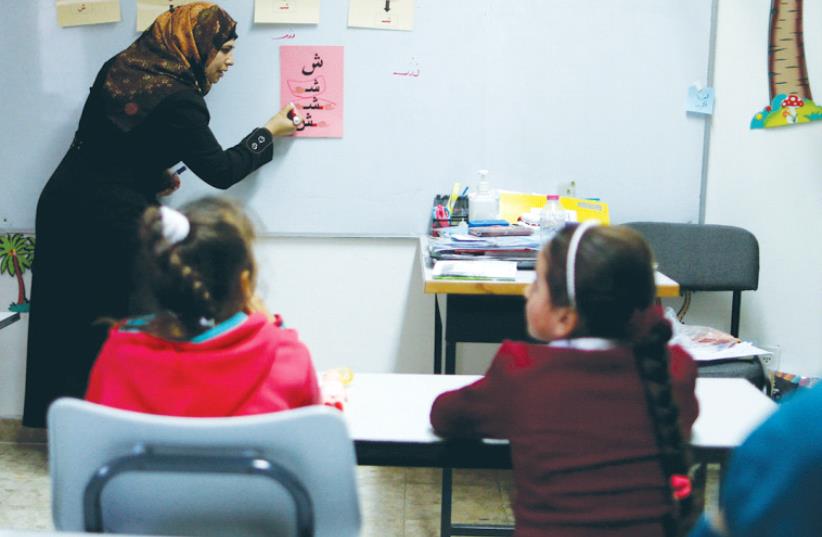 Israeli classroom
(photo credit: REUTERS)
Advertisement
Arab pupils who take “second date” (Moed Bet) matriculation exams in English on Monday will for the first time in years be allowed to use Arabic-English dictionaries, just as their Jewish counterparts routinely deploy Hebrew-English dictionaries during the test.The step away from treating Arabs as “second- or third-class pupils” – in the view of Arab MKs and the advocacy group Sikkuy – comes after media coverage of the apparent discrimination, including by Army Radio, embarrassed the Education Ministry, which had maintained that available Arabic-English dictionaries were not “pedagogically correct” and in some cases contained definitions that were incompatible with the values of the State of Israel.MK Yousef Jabareen (Joint List) and Sikkuy said the problem is far from solved because redress must still be found for all the students who took the exam without dictionaries in May and earlier and were therefore disadvantaged compared to Jewish students.“If it’s not intentional racism, it’s a clear degrading attitude towards Arab pupils and not dealing seriously with their professional and educational issues,” said Jabareen.“It’s treating them as second- and third-class pupils, especially when the Ministry of Education understands that Jewish students have the opportunity to use the dictionary. The decision now to allow use of the Arabic-English dictionary proves there was no justification for the previous policy of not allowing it.”Nisreen Morqus, co-director of the shared society department at Sikkuy, said another unresolved issue is whether the ministry will fulfill its stated intention to soon make an online Arabic-English dictionary available. She said the ministry had committed to do this by September. The ministry spokesman’s office wrote to The Jerusalem Post saying the dictionary would go into use in advance of the winter 2017 matriculation exams.Until now, Arab students have been able to use only English-Arabic dictionaries, handicapping them compared to Jewish students, because 30 out of the 100 points on the test are based on a writing exercise in English.The ministry spokesman’s office wrote in response to questions from the Post that Arabic-English dictionaries were not allowed because “they did not meet the required criteria of being pedagogically correct.”A document sent to Sikkuy by senior education official Tziona Levy that was written by Yoela Navon Terem, director of the ministry’s textbooks division and dated May 3, said: “The matter of dictionaries has been in treatment for seven years. Many efforts were made to find keys [ways] in the country and abroad for publishing an appropriate dictionary, but without success. Dictionaries that were reviewed did not meet the criteria because of pedagogical and policy problems.”For example, she wrote, some did not have enough entries, while others used outdated words and lacked new terms “especially in the topic of technology.” Another reason given for the dictionaries being rejected was that their “translations were incorrect.”Some dictionaries were found to be unsuitable because “they don’t match the values of the State of Israel – this is a problem especially with dictionaries from abroad,” Terem wrote.Morqus said the ministry announced only at 8:16 pm on Friday that Arab pupils could use Arabic-English dictionaries during Monday’s test and that educators were using social media and WhatsApp text messages in a bid to make sure all the students knew about it.“We will continue working on this problem,” she said. “What happens to those who didn’t have permission to use dictionaries? It has to be kept in mind that English is the third language for Arab pupils. It’s very critical for them to pass the matriculation exam in English in order to be accepted to academia. For many, it is English that holds them up. They are very dependent on the English matriculation exam for their future.”Morqus said the students who were disadvantaged should be compensated either by having points retroactively added to their test scores or by being allowed to sit for the exam again – this time with a dictionary.