"The ones responsible are those who go around the world and criticize a very reasonable decision." 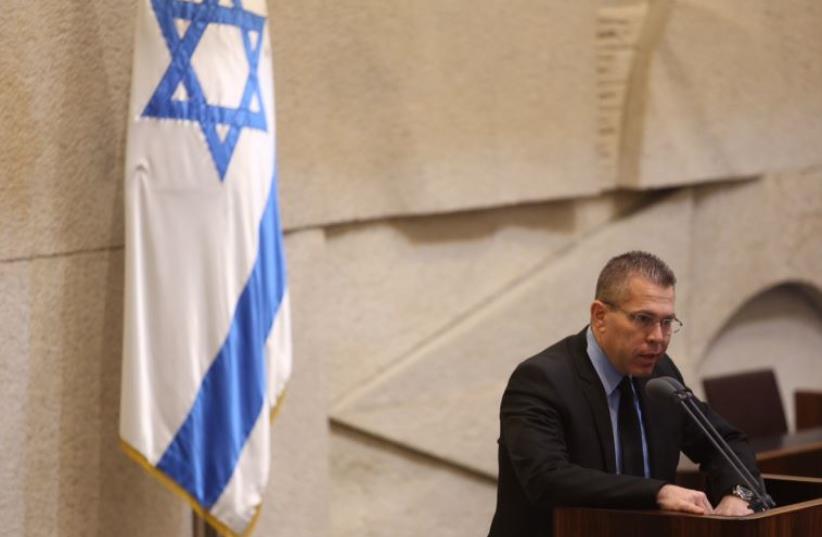 Public Security Minister Gilad Erdan speaks at Knesset
(photo credit: MARC ISRAEL SELLEM/THE JERUSALEM POST)
Advertisement
Public Security Minister Gilad Erdan blamed Israel’s left for the negative fallout following the detention of alleged BDS activist Lara Alqasem at Ben Gurion Airport earlier this month.“The left began an international campaign against their own country, trying to bring someone into the country who led a chapter of one of the most antisemitic boycott organizations [referring to National Students for Justice in Palestine] in all of America,” Erdan said on Sunday morning, in an interview on Kan, the Israeli public broadcaster.“This damaged Israel’s image,” he said. “The ones responsible are those who go around the world and criticize a very reasonable decision.”The minister also blamed the Hebrew University of Jerusalem, through which Alqasem’s student visa was approved. “The university is using taxpayer money to subsidize the studies of someone who acted against Israel,” said Erdan. “The Hebrew University acted horribly in my eyes. Not only did it support an anti-Israel student but it joined the legal processes against the State.”Earlier this month, American student Lara Alqasem was stopped at Ben-Gurion Airport under the law banning boycotters from entering the country. Alqasem had a valid student visa and had been accepted to study at the Hebrew University.In 2018, a law was passed to ban anti-Israel boycotters from entering the country. Since then, there have been a number of incidents in which activists were barred from the country because of their connections to organizations that are on the Strategic Affairs Ministry’s blacklist.Alqasem is a University of Florida student and the former president of her campus chapter of National Students for Justice in Palestine, one of the blacklisted groups, which advocates for a boycott and has created a hostile environment for many Jewish students on college campuses in the US.Alqasem also interned for Nonviolence International, a “fiscal sponsor” of flotillas seeking to break the naval blockade on Gaza, and a member of the US Campaign for Palestinian Rights, a major promoter of Israel boycotts.While some of Alqasem’s defenders argued that she had a change of heart in the past year, government sources said that she showed support for anti-Israel and boycott organizations on social media as recently as May.Last Thursday, the activist filed an appeal with the Tel Aviv District Court which ruled to uphold the ban against her.Lahav Harkov and Yonah Jeremy Bob contributed to this report.