Esther Herlitz, who broke the glass ceiling many times over, dies at 94

Israel’s first female ambassador also served as MK, adviser to Golda Meir, fighter in the Hagana and chairwoman of the International Harp Contest. 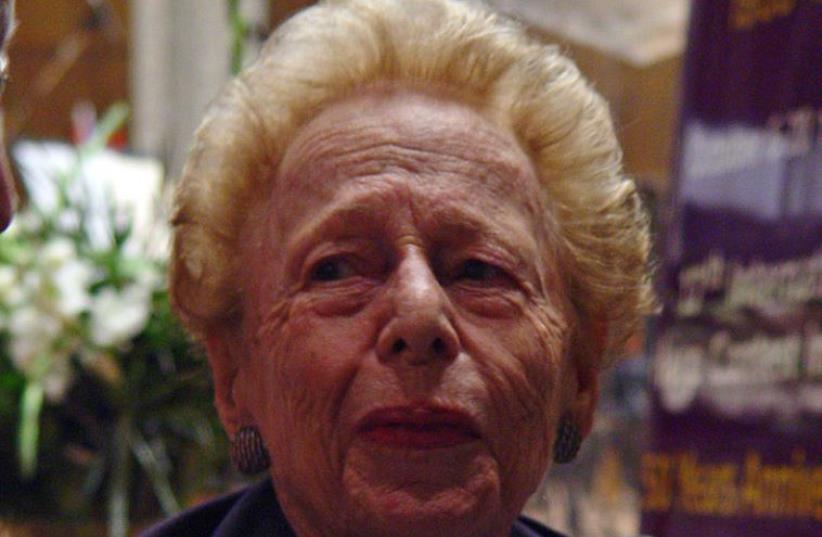 Esther Herlitz
(photo credit: Wikimedia Commons)
Advertisement
Esther Herlitz, who died on Thursday at age 94, played many roles in the creation and building up of the state – as a diplomat, establishing the women’s army unit in a besieged Jerusalem, a member of Tel Aviv City Council, an adviser to Golda Meir, founder of the Center for Volunteer Services, a MK, and taking a senior role in Na’amat.She was honored last year for her “lifetime of achievement and special contribution to society and the state,” the only woman among the Israel Prize recipients for 2015.Although in recent years she could barely walk, her mind remained active, so much so that as recently as March 14, after reading an item in The Jerusalem Post about Hemed, the Israel Science Corps in the prelude to the fledgling Israel Defense Forces, she sent an email to the journalist who had written the item to suggest an interview with Aura Herzog, who had been the secretary of Aharon Katzir who was the co-creator of Hemed with his brother Ephraim Katzir who later became the fourth president of the state.An achiever in several unrelated fields, Herlitz was never reluctant to share her reminiscences.Modesty was not her strong suit. She knew who she was and what she was and didn’t hesitate to let people know.Born in Berlin in 1921, she came to British Mandate Palestine in 1933, but always remained a yekke. Though fluent in Hebrew and English, she never quite lost her German accent, or the stereotyped German characteristic of wanting things done just so.The Herlitz family settled in Jerusalem where the young Esther initially attended the Gymnasia Rehavia, but she didn’t fit in, and when the Hebrew University High School opened she transferred there, and was in its first class.She joined the Hagana while still at school, and after graduating studied at what is now Jerusalem’s David Yellin Teachers College. Later she taught briefly until mid- 1943 when she joined the ATS, the Auxiliary Territorial Service of the British Army, where she spent four-and-ahalf years, winding up as an officer in Egypt. Unbeknown to the British, she was still working for the Hagana while in the British Army. The training that she received in the ATS proved useful when she joined the IDF.In 1947, the Jewish Agency established a school for diplomats.There were hundreds of applicants but only 27 were accepted, including Herlitz.Their studies were disrupted by the War of Independence during which Herlitz served in the Etzioni (Jerusalem) Brigade.She was later asked to help establish the women’s army unit in Jerusalem, then under siege.Moshe Sharett, who was Israel’s first foreign minister, asked that she be released from the army because he wanted her to work at the ministry. She was appointed head of the American desk. In September 1949, she became a member of the Israel delegation to the United Nations.During the following year she was appointed first secretary at the embassy in Washington.Four years later, she was transferred to New York as consul, in which capacity she developed close relations with major US Jewish organizations.After returning to Israel in 1958, Herlitz entered politics and established and headed the international department of Mapai, remaining in that role for four years. During that period she was also asked to head the Tel Aviv Municipality’s cultural department and was responsible for establishing a number of libraries including the renowned Beit Ariela.Herlitz returned to the Foreign Ministry in 1962 during Golda Meir’s term as foreign minister and headed the Guest Department and subsequently the Information Department. She was the first woman to be elected head of the staff committee and in 1966 was also the first woman to be appointed as an ambassador.She was assigned to Denmark, a country with which she maintained an abiding love affair. She served there until 1971, and in 1972, at the behest of Golda Meir, she established the Israel Voluntary Service. In 1974, she was elected to the Eighth Knesset on a Labor Party ticket and became the first woman to serve on the parliament’s Foreign Affairs and Defense Committee. She failed to be reelected in the 1977 election but returned to the Knesset in 1979.After leaving the Knesset for the second time, Herlitz was the director of the World Assembly of Choirs, known in Hebrew as the Zimriya, and she was also the chairwoman of the International Harp Contest – both triennial events. She was also the secretary of Tel Aviv branch of Na’amat and sat on the organization’s national executive board. In addition she was the long-reigning president of the Israel Denmark Friendship Society. Over the years she won many honors and awards, but the one that was most important to her before she received the Israel Prize was that of being one of the beacon lighters on Mount Herzl on the eve of Independence Day in 2003.Herlitz continued, for as long as she was independent, to maintain her contacts with the international community, and every Hanukka would invite diplomats to come and eat potato pancakes in her north Tel Aviv apartment while she told them the story of the Maccabees.