There are a number of what they term “anti-Israel” NGOs on the list of organizations where students can intern, including B’Tselem. 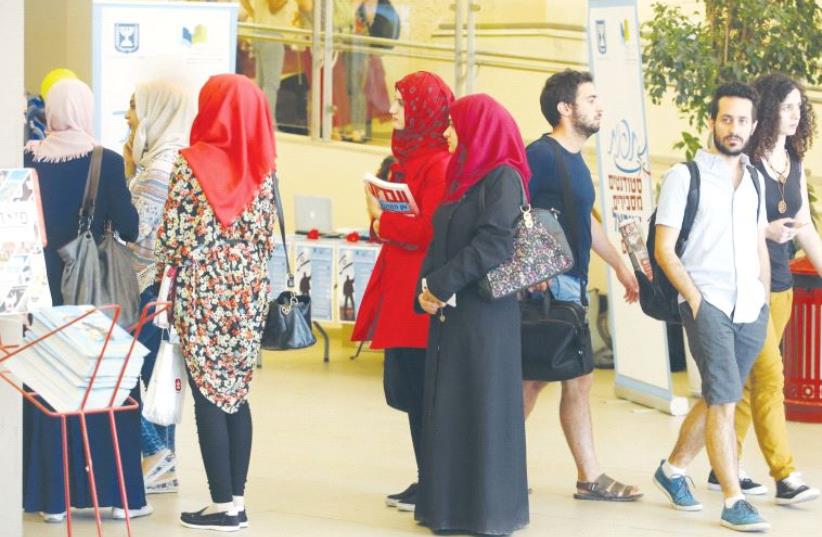 HEBREW UNIVERSITY of Jerusalem students report for the first day of classes last year.
(photo credit: MARC ISRAEL SELLEM/THE JERUSALEM POST)
Advertisement
A group of bereaved families has written Education Minister Naftali Bennett on Tuesday calling on him to investigate a Hebrew University of Jerusalem program, that provides academic credit in exchange for interning at what they term “anti-Israel” human rights organizations.The Human Rights Fellows Program, run by the Minerva Center for Human Rights in the university’s law faculty, offers students four academic credits and a scholarship in exchange for interning eight hours per week at a human rights organization.There are a number of what they term “anti-Israel” NGOs on the list of organizations where students can intern, including B’Tselem, Hamoked: Center for the Defense of the Individual, The Public Committee against Torture in Israel, and Gisha – Legal Center for Freedom of Movement.In a letter, obtained exclusively by The Jerusalem Post, the bereaved families said they were “horrified” to learn about the program, which they called “insensitive” and a “direct blow” to them.Among the signatories of the letter are Rina Ariel, whose daughter, Hallel, 13, was stabbed to death by a terrorist in her home in Kiryat Arba; Hadas Mizrahi, whose husband was shot and killed on Passover eve; Eliezer Rosenfeld, whose son Malachi was killed in a shooting attack on his way home; and Devora Gonen, who initiated the letter and whose son Danny Gonen was murdered by a Palestinian terrorist.“We find no reason why the Council for Higher Education should recognize and approve granting [academic] credit for activity in a ‘foreign agent’ organization which defends terrorists and their families, acts against the State of Israel and that enjoys huge sums of money from foreign governments and the New Israel Fund,” the families wrote.In addition to interning, students are required to participate in a year-long interdisciplinary course on human rights, taught by the program’s founding director, Prof. Daphna Golan.Golan is also one of the founding members of leftwing NGO B’Tselem, which last week took to the world stage and claimed that Israeli settlements are the roadblock to peace at a UN Security Council meeting.“We want to emphasize that the main work of Hamoked: Center for the Defense of the Individual is to defend terrorists and their families,” the families wrote.They noted that in the past year, Hamoked has submitted 54 petitions to the High Court of Justice defending 45 terrorists and their families.“Why should an Israeli law student receive academic credit for volunteering in a legal-political anti-Israel organization? If he wants to volunteer there – let them do so in their free time, and not sponsored by the Council for Higher Education and at the taxpayer’s expense,” they wrote.The letter was penned following numerous media reports last week citing rightwing organization Im Tirtzu’s criticism of the program and what it deemed the “politicization of academia.”“We are greatly concerned about such programs that enable students to earn academic credits by working with organizations that operate against Israel and the IDF,” said Im Tirtzu’s CEO Matan Peleg.“The Council for Higher Education’s approach of turning a blind eye sends a very problematic message to students.”He called for the formation of a committee to “extensively investigate” all the academic programs approved by the council.“We must end all official academic collaboration with organizations that are financed by foreign governments to work against the State of Israel, and which act like foreign agents in all respects. This academic theater of absurdity must come to an end,” he said.On Monday, Deputy Foreign Minister Tzipi Hotovely instructed her ministry to cut ties with the Minerva Center for Human rights over its alleged support of “anti-Israel organizations.”“These organizations have a record of ignoring the human rights of Jews. Most of them are involved in anti-Israel activity and the Foreign Ministry will not collaborate with these organizations that incriminate Israel on every stage possible,” she said.She demanded that the Foreign Ministry symbol be removed from the center’s website, and noted that the ministry never funded the organization, which she said operates “under the guise of academic activities, promoting a political agenda in collaboration with radical organizations.”For years the Foreign and Justice ministries and IDF officials have sat on panels with members of all of the NGOs in question with full knowledge of their activities, and while they often disagree, they have always done so respectfully.The Hebrew University released a statement in response to the group’s attack, saying, “The Minerva Center for Human Rights is an academic nonpolitical body that enjoys an international reputation, which operates within the framework of the Hebrew University and encourages teaching and research in the field of human rights.“As part of its activities, the center exposes students to the various positions of human rights organizations, as well as the stances of relevant government agencies, but does not provide support for organizations or the government.”