The hunt for Ezra Land Rover began this week when a former yeshiva student set up a closed group called “Ezra Land Rover – we were all his children,” and the posts and messages began flooding in. 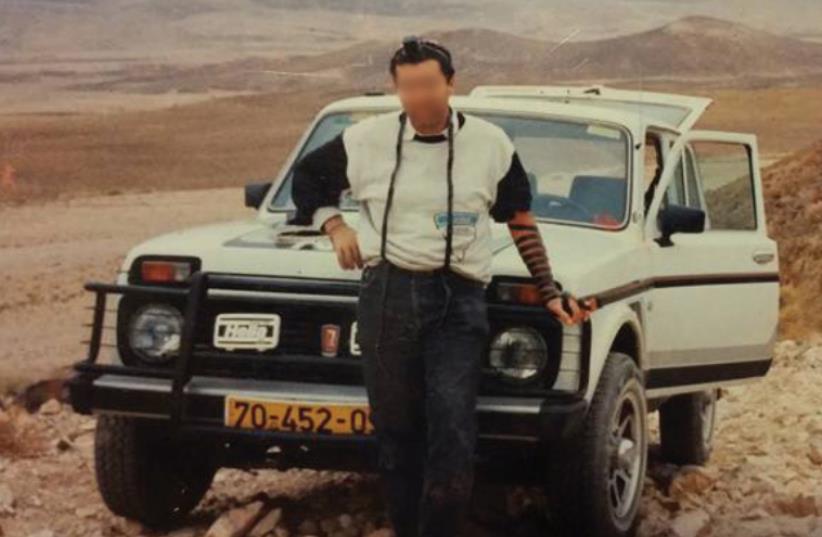 THIS MAN wearing phylacteries and leaning on the hood of an SUV is purportedly ‘Ezra Land Rover.’
(photo credit: FACEBOOK)
Advertisement
In the late ’80s and early ’90s all across Israel, teenage boys at national-religious boarding schools knew all they had to do was call a number, and the man would show up in his jeep ready to swoop them away for off-road adventures and frontier BBQs. He’d give them cigarettes, shwarma, let them drive his jeep and even shoot his pistol.Along the way, he may have also had something darker in mind.The man was known only as “Ezra Land Rover” thanks to the 4x4 jeeps he drove, and since Tuesday morning hundreds of former yeshiva students now in their 30s and 40s have taken to Facebook to track down the mystery man from their teenage years, who some suspect may have sexually assaulted an unknown number of teenage boys.The hunt for Ezra Land Rover began this week when a former yeshiva student set up a closed group called “Ezra Land Rover – we were all his children,” and the posts and private messages began flooding in.On the day the Facebook page went up, one of the founders, Tzur Meier, wrote that he and his friends still sit around on occasion talking about Ezra, and he would like to know how many other people encountered him. He added that “thousands of youths over the years drove his car without a license, some of them were drugged, some experienced sexual abuse of some sort, and all of this took place for years without him being arrested or exposed.”The post adds that the goal of the group isn’t to try to open a criminal case against Ezra, but to understand how widespread his actions were, and where he is today.On Tuesday the group reached a far wider audience after Amihai Attliel, a reporter for Yediot Aharonot, wrote a lengthy post on Facebook about his memories of Ezra. Attliel wrote about being a teenager at a national-religious boarding school in the early ’90s and how “no one knew his real identity, but rumors about him spread among us like wildfire.”Attliel described how a large number of boarding school students had Ezra’s phone number, and that if they were bored and stuck at school with nowhere to go and nothing to do they could call Ezra who “would come with his new jeep to anywhere you invited him.” Ezra would pass out cigarettes and cash, and would let the teenagers drive his car and even shoot his pistol in remote areas of the West Bank and beyond, the reporter wrote.Attliel – who said he only remembers one experience with Ezra, which involved nothing sexual – wrote that the mystery man was known for making passes at the teenagers and rubbing their feet on their long, unsupervised field trips. He was known for keeping bottles of juice that may have been spiked with tranquilizers, and many teenagers told stories of students returning from the trips feeling tipsy, their memories of the hours before hazy and unclear.He also, on at least one occasion, took a group of teenagers to Sinai in his jeep, crossing an international border without their parents or teachers being any the wiser, according to Attliel.The stories told about Ezra Land Rover in the post and on the Facebook group paint a picture of a time before cellphones and the Internet, when a mystery man luring teenage boys into the wilderness could fly under the radar and not be exposed and shamed on day one by students armed with smartphones. A number of posts also describe unnamed yeshivot and boarding schools that did not treat the issue with the attention it deserved, including one that reportedly expelled a group of students who complained to administrators about Ezra.On Tuesday, as the story went viral, hundreds joined the Facebook page, which has as its cover photo a faded picture of a man – purportedly Ezra – wearing tefillin and leaning on the hood of a white SUV in a desert.In the posts on Tuesday, former boarding school students who met or went on trips with Ezra wrote where and when they studied, naming schools from Petah Tikva to the Golan Heights to across the West Bank and southern Israel.Some said they’d heard about his reputation before and knew what to expect, and that on a number of occasions they punched or kicked Ezra when he tried to touch them during their jaunts. In one case, a group of kids ditched Ezra in the wilderness, driving off in his jeep, according to Attliel.Others shared rumors that Ezra had some sort of connection to the police or the security services, in that on a number of occasions he was stopped by police with minors in his vehicle and was released without incident. A number of posts said that Ezra’s family owned a factory, which explained the jeeps and the fact that he always had money and never seemed to need to work.As of Wednesday morning, his real identity had not been determined by the Facebook sleuths, nor was it clear if any had made contact with him.It is also unclear which, if any, alleged crimes would be covered under the statute of limitations. In addition, the posts on the Facebook page talk about stories heard of abuse, not actual firsthand accounts of survivors saying they were assaulted or that they witnessed anything worse than the foot-caressing.Contacted on Tuesday evening, a spokesman for the Judea and Samaria district police said he had not heard of the viral campaign and that no police complaint had been filed.The spokesman added that he thinks it’s best to be wary of what he referred to as “online shaming campaigns,” adding that “if there is suspicion of an actual crime then they should submit a complaint.”In the meantime, stories continued to stream in to the Facebook page about the man with the jeep and