"This is the dog that existed for thousands of years, exactly as he is now," breeder says. 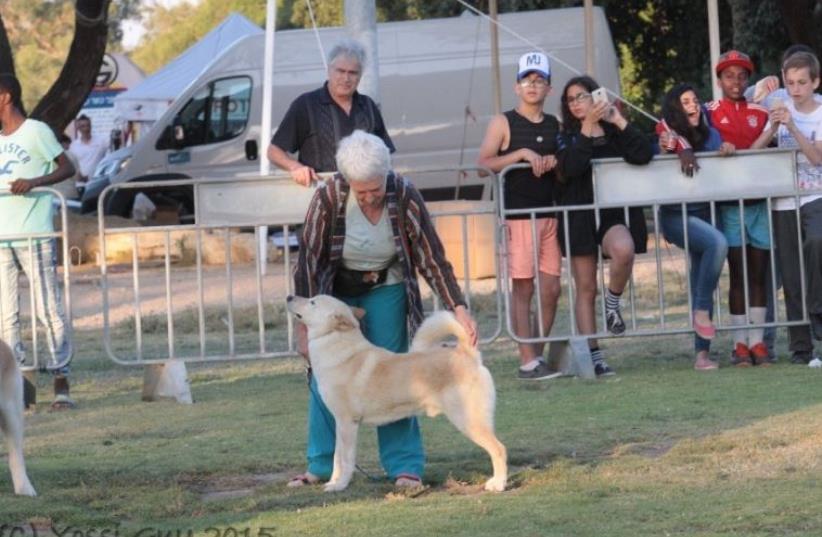 Myrna Shiboleth with one of her Canaan dogs at a show
(photo credit: MYRNA SHIBOLETH COURTESY)
Advertisement
For American-Israeli Myrna Shiboleth, preserving the Canaan – the national dog of Israel – and doing so from the dilapidated ruins of Sha’ar Hagai have been nothing short of her raison d’être for the past 46 years.Now facing a court-ordered eviction following a several- year, government-sponsored lawsuit over land occupancy, Shiboleth is scrambling to crowdfund the relocation of the Sha’ar Hagai Kennel.While the case has been ongoing since 2011, the Jerusalem Magistrate’s Court ruled in favor of the Israel Lands Authority on January 17, requiring the occupants of the area’s buildings to vacate within 90 days.Shiboleth made aliya from Chicago in 1969 and, soon after, settled in the disputed region, located about 20 km. west of Jerusalem just off of Route 1.Arriving with the express goal of breeding the Canaan dog, Shiboleth stressed the importance of preserving an animal that has existed since biblical times and has a unique status as the national dog of Israel.“We moved to the place because we wanted to open the kennel,” she told The Jerusalem Post on Wednesday.“We were looking for a place that wouldn’t bother anyone, that was isolated.... The place had been abandoned since the British left.”When she first arrived at Sha’ar Hagai, Shiboleth said she signed a rental contract with the Mekorot national water company, the owner of the land at the time. After 10 years, however, Mekorot was no longer considered the owner of the space, and she tried numerous times to create a similar rental agreement with the ILA.“We never claimed to be the owners; we just wanted to live here,” she said.Shiboleth stressed that she and her family refrained from constructing any new buildings, did not cut down any trees and continued all the while to pay arnona (property taxes) to the Mateh Yehuda Regional Council, while continuously trying to arrange a rental agreement with the ILA.“Nobody asked us for rent; nobody was willing to talk to us at all,” she said.As far as Sha’ar Hagai itself is concerned, Shiboleth described arriving to an abandoned and overgrown site in terrible condition, where she spent the first several months without water and 17 years without electricity.Instead, she and her family used oil lamps to light their living and working space.After operating for more than four decades, the kennel became the focal point of the ILA’s eviction lawsuit against Sha’ar Hagai residents. Ultimately, the 2011 case concluded 10 days ago.“They ignored our existence for 42 years,” Shiboleth said. “We feel that it is total injustice. We never did anything to them, and we saved these buildings.”Although she is filing an appeal, Shiboleth said she does not count on winning and, therefore, launched an online campaign to raise sufficient funds to move the kennel. At the moment, she has about 20 dogs residing there – a combination of Canaan dogs and collies, the latter of which many times partake in animal-assisted therapy, she explained.“I am hoping for people to come and notify me [about] possible places that we could move the kennel to,” she said.Shiboleth’s crowdfunding site, which she is hosting on gofundme.com, has so far raised nearly $12,600 of her $15,000 goal, which would enable her to pay her legal fees, as well as some of the initial construction on a new kennel, but would not likely cover all of the necessary expenses, she said.Despite the kennel’s longtime existence on the site, a statement from the ILA stressed that “the land is owned by the State of Israel.”“These are trespassers who, in the 1970s, took over state lands and six historical buildings in Sha’ar Hagai, a national park in which residences were prohibited,” the ILA said. “This is a criminal offense punishable by up to two years in prison.”The statement accused “the same trespassers” of establishing a commercial business on the property, describing the facility as “a kennel in which they raised purebred dogs and traded them.”“The trespassers did not have any rights to the public lands and they did as they wished,” the ILA continued.“Most of the landholders today are renters; those who pretend to be homeowners have no land rights.”Six years ago, ILA inspectors approached the residents to demand that they vacate the premises, but because they refused, the authority “was forced to turn to legal channels and file a suit against them for their evacuation,” the statement said. The ILA “does not intend to offer compensation or an alternative location to those who received the court ruling for evacuation,” according to the statement.“The authority reserves the right to retroactively claim from the trespassers evacuation fees and expenses as necessary,” the authority added. “ILA inspectors will continue to protect state lands from trespassers.”For Shiboleth, the lawsuit and subsequent eviction have put a damper on her feelings about Israel in general.“I don’t have much faith in the government at all,” she said. “The attitude, the lifestyle, the way people behave – everything is radically different from when I came to the country.”She emphasized the personal importance she maintains, however, of continuing to raise the Canaan dog, which she describes as “the first dog that became partner to man.”“This is one of the only breeds of dogs that still exists that is completely natural,” Shiboleth said. “We feel it’s very important to preserve them, because they are Israeli and because they are the original dog."“This is the dog that existed for thousands of years, exactly as he is now,” she added.