Gift to memorialize Alan Beer and 16 others murdered by terrorist in 2003 Jerusalem suicide bombing. 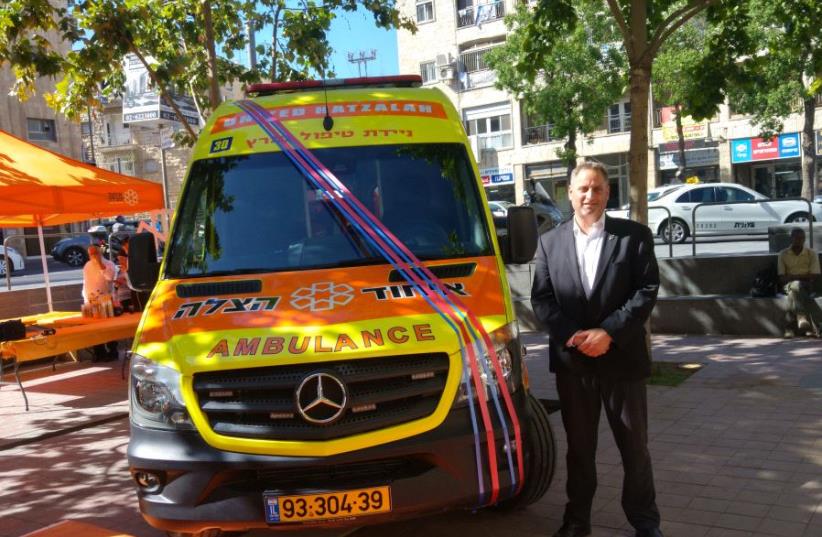 Dov Maisel poses Sunday next to the first mobile intensive care unit in Israel, dedicated in his uncle, Allen Beer’s, memory
(photo credit: DANIEL K. EISENBUD)
Advertisement
Fourteen years after watching his uncle Alan Beer die in a Jerusalem suicide bombing on Bus 14A that also killed 16 others, Dov Maisel, then a first-responder paramedic for United Hatzalah, presented Israel with its first mobile intensive-care unit in his memory.The Iranian-supported attack, carried out by an Hamas operative, resulted in an unprecedented court case in Washington that ordered Iran to pay Beer’s family, and the families of victims from another 1995 attack in Gush Katif, $600 million.However, the punitive damages awarded, decided by US District Judge Royce Lamberth, were largely symbolic. Indeed, the families represented in the case received a pittance of the money owed them, which Iran has refused to pay.Despite the terrorism sponsor’s ongoing recalcitrance, on Sunday afternoon, Maisel, now the vice president of United Hatzalah, proudly unveiled a $175,000 intensive care ambulance at the same location in Davidka Square where his uncle was murdered.“Today, in this place 14 years ago, I responded to a bus suicide bombing two days after my first daughter was born,” Maisel said. “And as we were doing triage here, I witnessed my own uncle die, and there was not anything we could do for him.”Standing a few meters from the mobile intensive care unit, he said: “We treated nearly 100 patients who were wounded, and there were 17 people killed here.”Beer, then in his mid-40s, had made aliya from Cleveland two months before he was killed in the attack.“Allen loved Jerusalem and Israel very much,” Maisel said, “and over the years when we were thinking what we can do in his memory, we and the other families decided to use the small amount of money we received from the lawsuit to come together and do something meaningful that would benefit the people of Jerusalem, which Allen so loved.”According to Maisel, the state-of-the-art mobile intensive care unit, to be operated by United Hatzalah, will provide free service to residents of the capital.“It is installed with the cutting- edge of medical technology and equipment, including EKGs, monitors, medications and field rescue equipment – everything you would need in an intensive care unit,” he said. “So, it really is at the forefront of emergency medical services, and we hope that it will save many, many lives here.”