The protesters say the government is “destroying agriculture in Israel.” 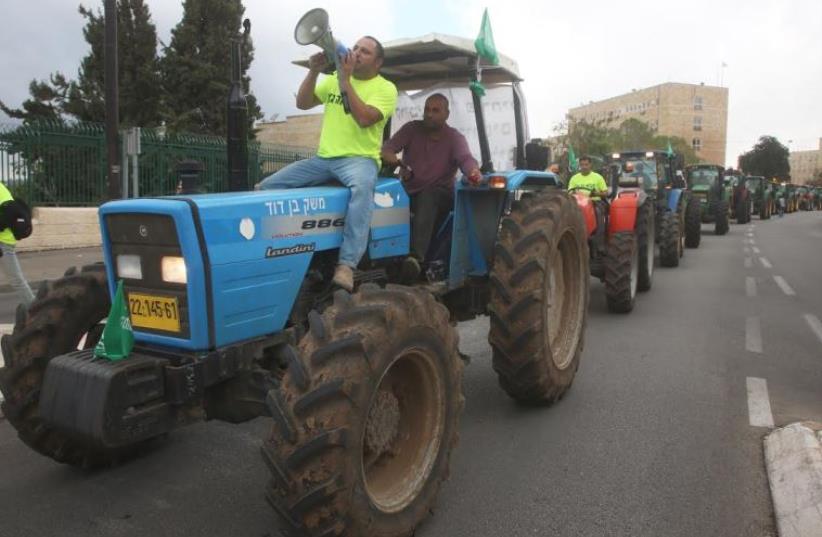 Farmers on tractors demonstrating in Jerusalem, November 9, 2015
(photo credit: MARC ISRAEL SELLEM)
Advertisement
A convoy of several hundred tractors choked up Road 443 and plowed through Jerusalem to the Knesset on Monday where farmers protested against what they see as the government’s “abandonment” of the agriculture industry.Accusing the government of “destroying agriculture in Israel” the demonstrators, led by the Farmers Federation of Israel, demanded policy changes in their sector.Among the focal points of their complaints was the middleman involved in business with retail chains, the reduction of government support for the agriculture natural disasters fund, the import of tomatoes from Turkey, the expected increase in water prices for agriculture and economic policies related to foreign workers.Farmers Federation of Israel president Dubi Amitai criticized the import of Turkish tomatoes to cope with vegetable shortages, arguing “the Israeli government provides a safety net for the agriculture of [President Recep Tayyip] Erdogan – instead of farmers within our borders.”MK Omer Bar-Lev (Zionist Union), called on the government to “recognize and understand that agriculture is a national value of the first order,” describing the country’s farmers as the “backbone of Israel’s security.”MK Haim Jelin (Yesh Atid), chairman of the Knesset’s Agricultural Lobby and a former farmer, drove the first tractor in the caravan on Monday.“I am ashamed that the government has forgotten its values,” Jelin said. “The government lacks determination and allows tycoons to accumulate capital at the expense of farmers and consumers. The time has come to put an end to the current situation in the industry, in which there is an unfair distribution of marketing profits among manufacturers and retail chains.”“Where there is agriculture, there is a state,” Jelin continued. “Where there is no agriculture, the state is finished.”